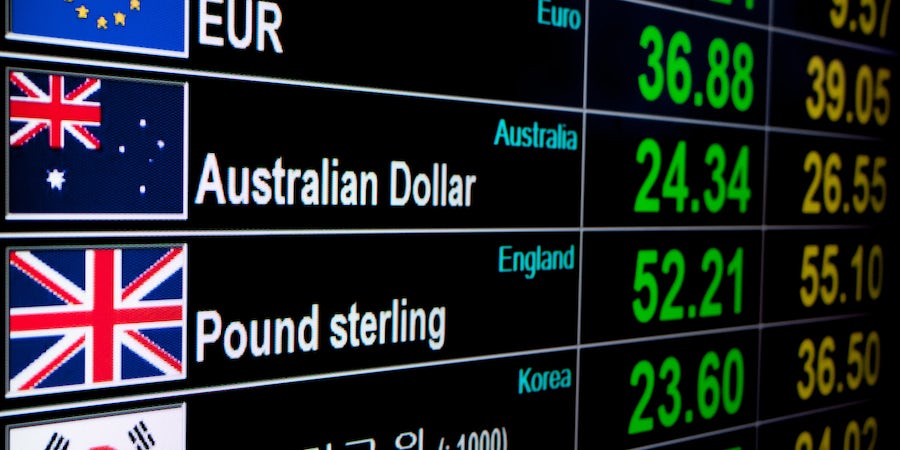 (10:30 a.m. GMT) -- Sterling hit a 31-month high the week beginning December 9, with the pound worth 1.1913 against the euro, meaning cruise passengers who buy the European currency now are likely to get more for their money than at any time since mid-April 2017.

The pound is also performing well against the dollar. But should cruisers hold out for an even better deal?

One of the many great reasons for taking a cruise is that passengers don’t need to carry a lot of cash, if any. However, some local currency comes in handy at ports, for excursion spends, souvenirs or taxi fares.

Some outlets won’t accept card payments or will charge a fee for small purchases paid by card. Holidaymakers who’ve booked a few extra days for a pre- or post-cruise land-based stay will certainly need some cash.

This means that, unless you’re cruising around the UK, you’ll need to exchange currency -- and as we all know, a ‘good’ or ‘bad’ exchange rate at the time can make a big difference to how far your pounds go.

Exchange rates also affect on-board prices of extras such as bar bills, spa treatments, speciality restaurant fees and money changed for casino chips on cruise lines that deal in other currencies, such as MSC Cruises, Costa, Celestyal Cruises and other European lines that use euros; or lines such as Royal Caribbean, Celebrity and Princess Cruises, which use U.S. dollars.

What’s more, brochure prices for a handful of cruise lines are set in a different currency to the pound and in this instance, a favourable exchange rate at the time of booking could see the actual price of the itinerary come down quite substantially.

No-one can be 100% sure of the best time to change money, but with a little foresight, you can make your forex go further.

When sterling is high against the currency you want to buy, you get more for your money. The amount of currency you will get depends on the interbank exchange rate at the time of purchase.

So, to get the best deal, you need to buy your currency at a rate as close to the interbank rate as possible. Generally, that means not buying last-minute currency at ports, airports or on board the ship. Do some research, book ahead and watch the market. It’s easy these days to keep an eye on exchange rates by signing up to an online rate alert system.

How Has the Pound Performed This Year?

Peter Lavelle at foreign exchange specialist Pure FX, said: “The pound has strengthened against its two biggest currency counterparts, the euro and the US dollar this year. To be specific, the sterling vs euro interbank exchange rate began 2019 at 1.1087, and, as of December 10, stood at 1.19. That’s a gain of over eight cents, or 7.33%, as well as close to a 31-month high.

The pound-to-US dollar interbank exchange rate has also risen to date this year, although more modestly. British sterling was 1.3206 against the US dollar on the interbank market on December 10, up from 1.2737 on January 1 2019 – a gain of over 4.5 cents.”

In other words -- a couple of onboard spa treatments totalling €100 could work out about £4 or £5 cheaper now than in the summer of 2017.

How Will the UK Election Affect the Exchange Rate?

"At present, the sterling v euro interbank exchange rate is at a 31-month high, because the financial markets think that, if there's a stable, majority UK government after the December 12 general election, this will contribute to the UK's political and economic stability. In turn, this would lift the UK’s economic growth, which may influence the pound," Lavelle says.

Generally, stable government results in a rise in sterling; uncertainty means a fall.

The markets don’t like the idea of a hung parliament and, if there’s a Labour government -- which means going back to the drawing board on EU exit negotiations -- they expect the pound to fall. As would a coalition government.

So, with the pound at a high, cruisers looking to exchange money will get a good rate at the moment. But could the pound perform even better? And for anyone heading off on a winter cruise or looking to book something for next year, should they buy currency now or hang on?

"If you can’t bring yourself to exchange all your money at once, consider exchanging half your money now and half if the pound strengthens even more or starts to weaken.

"Above all, avoid buying your holiday money last minute. Bureaux de change at airports, train stations or ports nearly always offer awful rates. Despite advertising 0 percent commission, they often mark up their exchange rate to include fees of anything up to 13 percent, knowing holidaymakers have no choice but to accept."