You may also like
Dismiss
Norwegian, Royal Caribbean Team Up To Create Cruise Health and Safety Protocols
Rolling Out the Deals: Why Now Might Be a Great Time to Book a Cruise
Wave Season Cruise Deals 2021
Ships Ahoy! A Weekly Round-Up Of Worldwide Cruise Ship News
Live From Royal Caribbean's Odyssey of the Seas: Why You'll Never Be Bored on This Cruise Ship
Emerald Cruises Officially Launches in Australia
Celebrity Beyond Completes Sea Trials; Moves One Step Closer to Debut
NCL Reveals More Dining, Design Details on New Cruise Ships Norwegian Prima and Norwegian Viva
These Ships Are Coming Back To The U.S. in 2022: Here’s Why You Should Care
Just Back From Allure of The Seas' Maiden Galveston Sailing: Hits and Misses 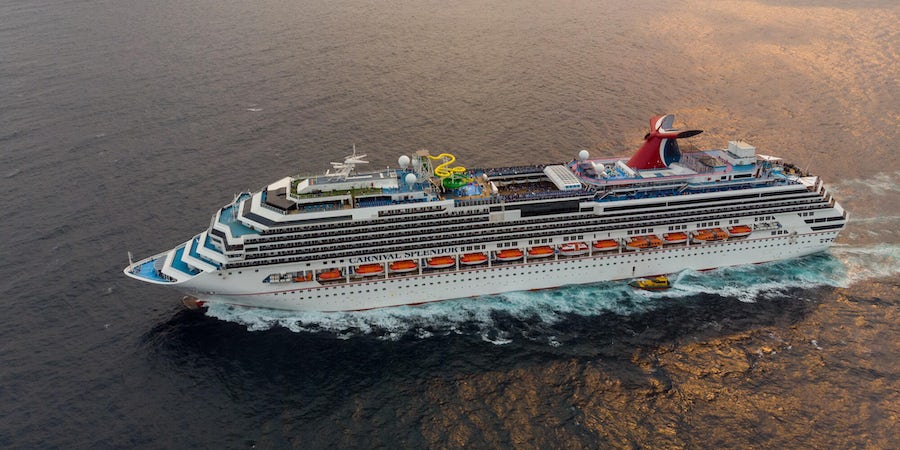 Last night, travel agents and media took over Carnival Splendor, the largest cruise ship to be based year-round in Australia.

We had only 12 (awake) hours to check it out, but one thing was clear: Splendor is quite different to Carnival Spirit, its Sydney fleetmate. However, there were plenty of similarities, a few familiar faces and that distinctly fun atmosphere that keeps people coming back for more.

Speaking at a press conference, Carnival Cruise Line's local vice president, Jennifer Vandekreeke, acknowledged the volcano eruption affecting cruise passengers in New Zealand, saying the company cancelled its big welcome celebrations out of respect but ultimately decided to proceed with this preview cruise to help educate travel agents, many of whom had flown interstate.

Here are our initial impressions, until we take a longer voyage to update the current ship review.

If you've sailed on Spirit, you won't be too shocked by the decor. It's a wacky mishmash of colours and patterns and a gazillion little lights and huge chandeliers. But there's a lot more pink. (In yesterday's choking bushfire haze, it was closer to smoked salmon!)

Joe Farcas, the line's legendary designer, apparently wanted people to feel transported when they stepped onboard, instantly snapping you into holiday mode, so that explains the overwhelmingly whimsical style. The loose theme is "splendid things" and, yep, it's definitely not bland or boring. It's like the Jetsons opened a resort in the 1950s. Or something. We're really not sure what was going through Farcas' crazy mind in 2008 when the ship was built, but we kinda love the zaniness.

Lots of venues have been added to please Australians.

Splendor didn't have some of Spirit's most popular places, so five new bars and three cafes were installed during the ship's "dry dock" revamp in November. You'll find Guy's Burger Joint, RedFrog Pub, the poolside rum and tequila spots, Alchemy, Red Carpet Dance Club, and you can still get free 24-hour pizza and soft serve icecream in the buffet.

New food options include Seafood Shack and Farenheit 55 steakhouse (charges apply), which are found on other Carnival ships. But like we said, Splendor is different so it also has some things that you won't find on any other ship in the world, such as Masala Tiger, serving free and delicious Indian cuisine, and Juice & Java, selling fresh-pressed juices and coffees.

Coffee snobs will be happy to hear the baristas at the new JavaBlue Café make a great flat white as they have just been trained by Vittoria, which also supplies the beans. As Carnival knows how much Australians love decent coffee, there's even an espresso machine in the adults-only Serenity Retreat -- perfect for a quiet cuppa with an ocean view. By the way, Serenity also has a nice kid-free pool, shaded bar area, padded sunlounges and some shade cloths for sun protection.

Two other areas that deserve special mention are the buffet and the spa. The Lido buffet is big and most seating is in booths, so it looks like an American diner. Choices include Ol’ Fashioned BBQ, Mongolian Wok, Off The Grill, Chef’s Choice and The Dessert Station.

Cloud 9 Spa has more than a dozen treatment rooms, a gym and a thermal suite full of steamy rooms, baths, showers, heated ceramic lounge chairs and a thalassotherapy pool. Guests staying in the nearby Cloud 9 cabins and suites get complimentary access to this relaxation area.

Some of Carnival Spirit's crew and entertainers have moved over.

Music Manila, the best band at sea, is now on Splendor. Frankly, these guys are enough reason to book a cruise. They totally rocked the "rock and glow" party on the pool deck, and they also perform every day on a specially built stage in RedFrog -- yes, they finally get their own pub to play in.

Dessi, the beloved maître d’, is on Splendor and she's got her own restaurant, too, so if you're a fan, be sure to select "fixed" dining times at Gold Pearl. The second main dining room, Black Pearl, is "anytime dining" and hosted by Van Burn. Black Pearl Showtime, with waiters dancing on tables, is 8pm.

The popular Lee Mason is cruise director; he previously worked on both Spirit and Legend, among other ships in the fleet. Captain Francesco La Fauci has remained Master of Carnival Splendor since the ship moved from Miami to Australia.

The new waterslides are more adventurous.

Sorry, I didn't want to ruin my Axl Rose hair so I didn't try the waterslides but Vandekreeke declared Green Lightning to be scarier than Spirit's Green Thunder because you can see the 11-metre drop before you freefall. A slingshot curve twists and spits you out into a swirling bowl, which you spin around like a roulette ball. Apparently the record is 4.5 times around the bowl, so take that as a challenge when you dare to ride the slide.

The main pool deck has an amusing name, Splendido Lido, and a retractable roof so you can swim in all weather conditions. Dive-In Movies are held here, too.

The bigger size has pros and cons.

With 14 decks, a gross tonnage of 113,300 and a length of almost 300 metres, Splendor is massive. Accommodating 3,900 passengers (almost double Spirit's capacity) it has a lot more bunks in quad share cabins and 220 interconnecting cabins for families and groups of friends.

But the layout is confusing and we struggled to find our way around (even before drinking) as we kept running into blockages and cutting through other venues to get anywhere. It takes a while to get your bearings and figure out the best way to go aft and forward.

On the plus side, a bigger ship allows all the extra venues, things to do and more shows in the theatre. The new production is called Airia, which incorporates aerial stunts, illusions, dancing and an awesome soundtrack, starring homegrown performer Aleisha Manion.

Our cruise had approximately 3,500 guests so it was pretty full, but it didn't feel crowded and the only queues were for the bars.

Cabins have the same look.

The staterooms were not modernised in the refurb, but they do have Australian power points (unfortunately no USB ports). Pictured above is a mini suite with a long and narrow balcony, and below is our corner aft cabin with a deeper balcony and four sunloungers. It was perfectly comfortable but lacked the pizzazz of the public rooms. Not that we're complaining -- all we wanted to do in it was sleep.

Carnival Spirit also continues to be based in Sydney, until October 2020 when it relocates to its new home in Brisbane.