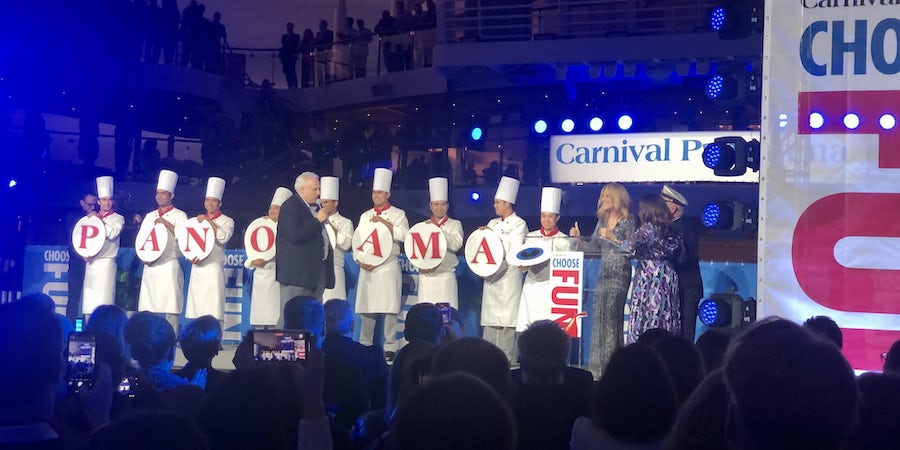 "Look around. Isn't it gorgeous?" said White, dressed in one of her signature floor-length sequined gowns, this one a gunmetal gray. "I've been aboard several Carnival cruise ships, but now Carnival Panorama is my favorite."

Carnival Cruise Line President Christine Duffy said that White was the perfect choice as the godmother for several reasons. One, her yarn company, Vanna's Choice, supports St. Jude's Children's Research Hospital, which is also a Carnival charity. Two, the line has partnered with "Wheel of Fortune" before, through slot machines; Carnival also announced the name of its next ship, Mardi Gras, on the show earlier this year.

But mostly, Vanna White was the best fit for Carnival Panorama because of her now-iconic position on America's longest-running syndicated game show, Duffy said. "She is in America's living room every night," Duffy explained, addressing White. "You personify Carnival for us as America's cruise line."

The ship marks the first new-build from Carnival for the West Coast in more than 20 years. Nods to California were made throughout the hour-long ceremony, held on Carnival Panorama's pool deck. Carnival Brand Ambassador John Heald served as master of ceremonies, walking down the red carpet with members of the University of Southern California marching band, the Spirit of Troy.

Duffy noted that Carnival fielded a float in last January's Tournament of Roses parade in Pasadena, and Carnival's airship, which circled the ship during the ceremony, will be in Southern California for the next few weeks. "We took the West Coast by land, by air and by sea," she said.

Carnival Panorama is the third ship in Carnival Cruise Line's Vista Class; sister ships include Carnival Vista, which debuted in 2016, and Carnival Horizon, which launched in 2018.

It's not the first in its class, but Carnival Panorama does have some new-to-the-line features, including Carnival Kitchen, a culinary studio for hands-on cooking classes; the SkyZone trampoline park; and a bar dedicated to U.S. military veterans.

Lagasse and Sodamin do not have restaurants on Carnival Panorama, but both have specialty restaurants slated for Mardi Gras, the line's next new ship, debuting in August 2020. Lagasse will have his first restaurant at sea with New Orleans-themed Emeril's Bistro 1396, to be located in the new ship's French Quarter Zone. Sodamin, Holland America Line's master chef who also wrote a book called "Food Faces," will have a restaurant called Rudi's Seagrill, featuring Instagram-worthy "plates with personalities."

The Carnival Kitchen has nine cooking and prep stations with sinks and cooktops, as well as iPads set up with recipes. There will be more than 15 different classes in which passengers can make different dishes -- including the line's famous chocolate melting cake, Duffy said -- and eat dinner at a long table within the space.

"Many of our guests asked for recipes, and we did some small cooking demonstrations in our steakhouse," Duffy said. "This is a way to expand it even further and get our guests in the action."

The SkyZone space is 3,000 square feet, located where the IMAX theater was on Carnival Vista and Carnival Horizon. It has a court-style formation on one side, where people can play games like basketball. (With the trampoline, it's easy to make a jump shot.) The other side has a huge airbag underneath a balance beam, a climbing rope and a rock climbing wall.

Duffy said she was most moved by the addition of the Heroes Tribute Bar, which is dedicated to America's veterans. The space, where the SkyBox sports bar is on the sister ships, still has TVs and a sports ticker, but the decor is focused on veterans. A portion of the proceeds benefit longtime Carnival partner organization Operation Homefront, Duffy said.