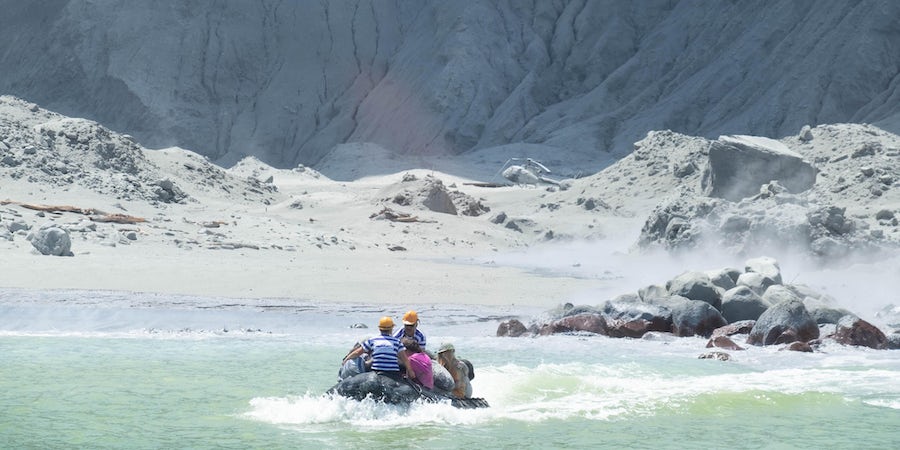 (Updated Tuesday, 7:45 a.m. AEST) -- Passengers from Ovation of the Seas are among the injured and missing people, and at least five tourists have died, after a volcano erupted on New Zealand's Whakaari (White Island).

Around 50 visitors were on or near the island at the time of the eruption, and most have since been transported to shore, including the five deceased, according to a NZ Herald report. Eight tourists still on the island are also presumed dead, while a further 31 are in hospital, many of whom are not expected to survive their severe burns.

National Operation Commander Deputy Commissioner John Tims told a press conference the island is covered in ash and volcanic debris, making it too dangerous for police and rescue personnel to enter.

The eruption occurred without warning on Monday afternoon around 2.15pm, with several rescue helicopters attending.

Michael Schade, who is travelling with his family, tweeted that their tour group had just left the volcano crater 20 minutes before it erupted. White Island Tours boat operators helped rescue some people from the island (pictured above), but helicopters "looked destroyed", he said.

Royal Caribbean's 4,905-passenger Ovation of the Seas arrived at the nearest port of Tauranga yesterday, and it is understood that most of the missing tourists were visiting White Island on the cruise line's shore excursion. Ovation of the Seas was due to depart last night but instead stayed in Tauranga. The ship is almost halfway through a 12-night cruise from Sydney.

Royal Caribbean's spokesperson in Australia told Cruise Critic: “We can confirm that a number of our guests were touring the island today. We do not have any additional details to share at this time. Ovation of the Seas will remain overnight until we learn more about the situation. We will offer all possible assistance to our guests and local authorities. Please keep all those affected in your prayers.”

New Zealand Cruise Association released a statement that it is "very concerned" about the welfare of the cruisers.

“Our primary concern right now is with the wellbeing of the passengers and all those involved. We would like to extend our heartfelt concern to the passengers and their families,” NZCA Chief Executive Officer Kevin O’Sullivan said. “Our hope is that everyone will be recovered quickly and unharmed, but at this time we have no further information.”