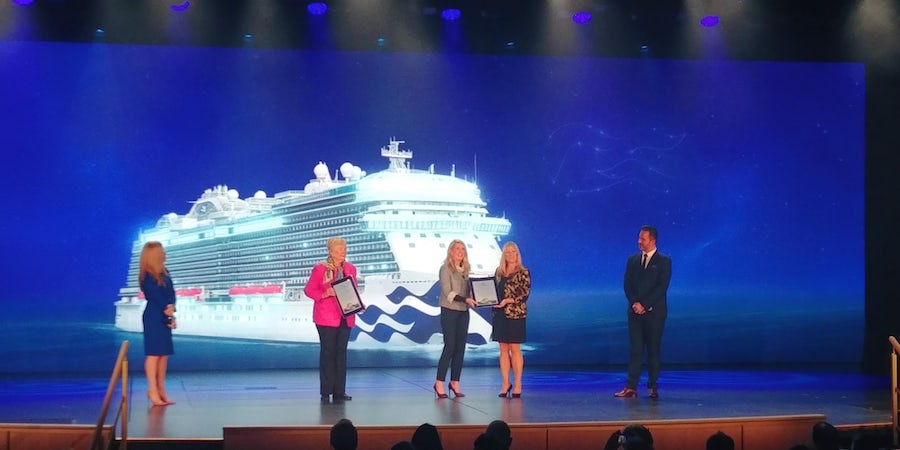 (1:10 p.m. EST) -- Actress and Princess' celebrations ambassador Jill Whelan, (aka Vicki Stubing of "Love Boat" fame),  presided over the naming ceremony for Princess Cruises' fourth Royal Class ship, Sky Princess, in Fort Lauderdale today. The celebration -- attended by cruise line executives, local dignitaries, media and travel advisors -- made good use of the ship's name, honoring women who have reached for the sky both through the U.S. Space Program and with Princess Cruises.

Co-godmothers Captain Kay Hire and engineer Frances 'Poppy" Northcutt, two pioneers of the U.S. space program and groundbreakers for women in science, represent women have dreamed big and reached for the sky.

The women, fittingly, pushed a NASA-style "launch" button -- after a minus-10 count, of course -- to release a 15-liter bottle of Champagne, which successfully smashed against the ship.

Captain Hire helped launch more than 40 space missions as a mechanical systems engineer, and as an astronaut she logged 700 hours in space and orbited the earth 475 times. Poppy Northcutt, one of the earliest pioneers of women in the Space Program, served as the first female mission control engineer when NASA made history with its mission to the moon; it was her team's calculations that helped  bring the crew of Apollo 13 home.

"As we celebrate our newest, most technologically advanced ship -- one whose spirit of adventure and discovery match the grandeur of her name, Sky Princess, we also applaud the groundbreaking women of the U.S. Space Program," said Princess Cruises' president Jan Swartz (one of just a handful of women leading a major cruise line). "Our godmothers, Captain Kay Hire and Poppy Northcutt, remind us all of what we can achieve when we reach for the sky."

These women -- and others of the space program such as Dr. Mae Jamison, Dr. Ellen Ochoa and Eileen Collins -- "burst through the boundaries to achieve what was once thought impossible. We honor these achievements on Sky Princess, which is a reflection of that pioneering spirit, which with its MedallionClass moves Princess beyond the boundaries of what people once thought was possible."

The naming celebrations included a performance of "Dream On" by America's Got Talent alum Brian Justin Crum, as well as a performance of "This is Me" from "The Greatest Showman," a song that is featured in the cruise line's new production show "Rock Opera" and is all about accepting who you are and excelling at whatever you choose to be.

Having already sailed two three-night taster cruises, Sky Princess departs on its first weeklong cruise to the Caribbean tonight. It boasts three specialty restaurants, including the new-to-Princess, casual Bistro Sur La Mer created in partnership with 3-Michelin star chef Emmanuel Renault. It also has the line's first escape room experience, a fully gamified and digital experience that changes every time you play; the line's largest Enclave thermal suite; and two adults-only spaces: the complimentary Retreat and extra-fee Sanctuary. It, of course, has many of Princess' signature favorites as  well including Sabatini's, Crown Grill, Movies Under the Stars and a lovely three-deck high Piazza with spiral twin spiral staircases and real water wishing wells (coin throwing not encouraged).