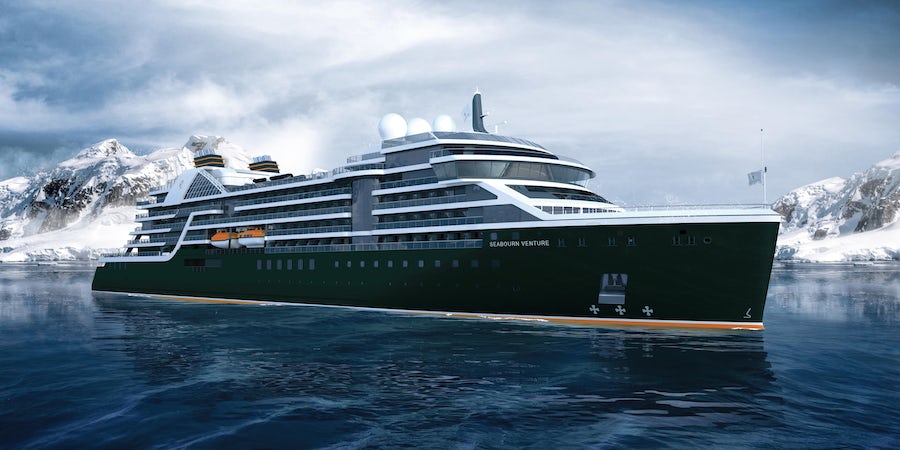 The event marks a significant step in the construction of the line's first ultra-luxury purpose-built expedition ship. Seabourn Venture is scheduled to debut in June 2021, and a second expedition vessel, still to be named, is scheduled to launch in May 2022.

"This milestone is always an exciting moment, as it represents another step forward in a new chapter of expedition cruising for Seabourn and our guests," Richard Meadows, Seabourn's president, said in a statement. "As Seabourn Venture continues to take shape, we look forward to revealing more details and highlights of her progress over the months to come."

This ship, which will be Seabourn's sixth, is designed with a PC6 Polar Class-rated hull, which means it's equipped for summer/autumn operation in medium first-year ice.

Notably, Venture will have two custom-built submarines to provide passengers views beneath the ocean's surface. It will also offer a full complement of double sea kayaks, mountain bikes, e-bikes and a fleet of 24 Zodiac rafts that will be able to accommodate all passengers onboard at once.

The vessel's 132 cabins are all veranda suites that come in several different sizes and configurations. While not the ship's largest accommodations, two Wintergarden Suites are noteworthy for being Seabourn's first two-story suites afloat.

"After an intense design phase, this marks a new step forward in the process of building the ship, marking the result of a well-established collaboration with a major partner like Seabourn," said Marco Ghiglione, managing director of the shipyard.

Seabourn Venture expects to make its debut on a 10-day pre-inaugural "Highlights of the English Channel" voyage, sailing from Lisbon to Greenwich (London), UK.

Following that, the vessel will reposition for a season of summer cruises in Svalbard, Iceland, Greenland and the Canadian Arctic.

During its first winter, Seabourn Venture will sail the coast of South America before arriving for a debut season in Antarctica, sailing roundtrip itineraries from Ushuaia to the Antarctic Peninsula.