You may also like
Dismiss
Live From MSC Cruises' MSC Grandiosa: What's it Like Sailing on a Big Ship in the COVID Era?
Australia Extends Ban on Cruises to March 17, 2021
P&O Cruises Restarts Cruising For First Time in 15 Months on Britannia
Royal Caribbean Takes Delivery of World's Biggest Cruise Ship Wonder of the Seas
MSC Cruises Extends Seasons of MSC Virtuosa Cruise Ship in the UK, MSC Bellissima in Dubai
These Ships Are Coming Back To The U.S. in 2022: Here’s Why You Should Care
Are Cruise Lines Increasing Gratuities in 2023?
Royal Caribbean Showcases New Icon of the Seas Cruise Ship with 'Making an Icon' Video Series
Live from Grandeur of the Seas: The Beloved Lady G Cruise Ship Still Reigns
Just Back From Allure of The Seas' Maiden Galveston Sailing: Hits and Misses 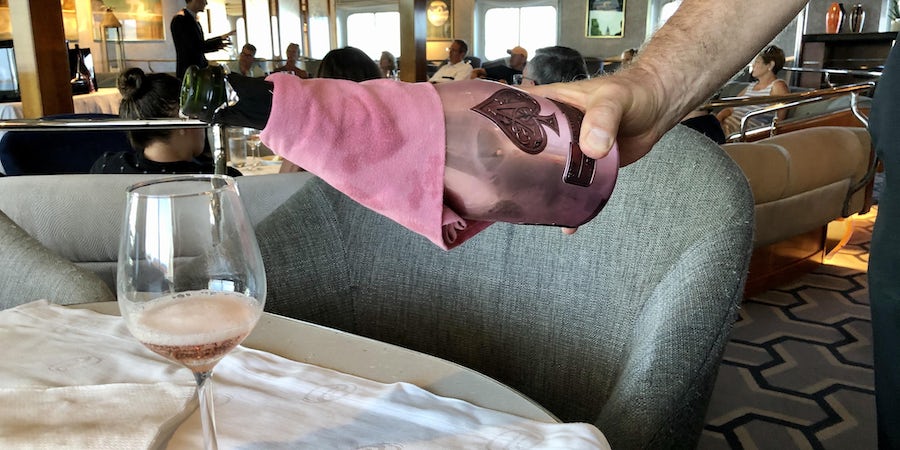 The Ace of Spades Champagne, which was created by the Cattier family over 12 generations (Photo: Chris Gray Faust/Cruise Critic)

Just Back From SeaDream Yacht Club: What It's Like Cruising on a SeaDream Wine Voyage

The Ace of Spades Champagne, which was created by the Cattier family over 12 generations (Photo: Chris Gray Faust/Cruise Critic)

We're back from a Thanksgiving cruise on SeaDream II, a luxury 112-passenger ship that specializes in small ports and outstanding service.

With a focus on dining and an all-inclusive atmosphere, it's no surprise that SeaDream Yacht Club has been one of the pioneers in developing specific wine voyages for its luxury-loving passengers. Introduced in 2014, the Wine Voyage program draws wineries from the high end of the spectrum; our trip, for example, featured Champagne from the French house Armand de Brignac, which starts at $250 a bottle.

Here's what we liked about SeaDream Yacht Club's wine voyage -- and why it's perfect for both oenophiles and more casual wine drinkers.

You might not know the name Armand de Brignac immediately, as it's so fancy you can't find it in every wine shop. But if you've seen a sporting event celebration or a video by rapper/songwriter/producer Jay-Z in recent years, then you've probably noticed the distinctive gold metallic bottles. Jay-Z (real name Shawn Carter) is the owner of the brand, and he's made the Champagne the celebratory bottle of choice for NBA Championship locker room antics. It's referred to the "Ace of Spades" because of its pewter logo.

Jay-Z doesn't make the wine, but he has given the house carte blanche to produce "the best Champagne possible," said Pierre-Alexandre Dhainaut, the charming brand ambassador on our sailing. It's created by the Cattier family, which has been making wine in the Champagne region for 12 generations. The first bottles of Armand de Brignac Brut Gold were released in 2006, and reviews for subsequent releases have been spectacular.

SeaDream Yacht Club offers wine voyages in the Mediterranean, where cruisers can often visit wineries (or at least the relevant regions) in France, Spain or Italy during their trips. In the Caribbean, where the line also offers wine-centric voyages, that's not possible, so having a luxury Champagne house onboard -- particularly during a festive holiday -- was an excellent choice.

As part of each wine voyage, passengers are treated to a complimentary tasting of the wines. On our trip, this was held inside on a sunny afternoon, but many passengers had slightly blown out their palates, thanks to free-flowing rose at lunch or rum drinks by the pool.

It's worth holding back when you're tasting Champagnes this good, however. Besides the Gold Brut, we were treated to nearly full glasses of Armand de Brignac Rose, Blanc de Blanc and Demi Sec. The house's Blanc de Noirs, which wasn't served, is created in such limited production -- only 3,535 bottles -- that it's nearly impossible to find. (If you do find it, expect to pay $1,000 or more for a bottle.)

Most of the passengers on our cruise seemed like fairly casual wine drinkers, save one entrepreneur from San Francisco who owned his own vineyard. So the atmosphere at the tasting was decidedly more festive than stuffy. We'll wager that not many people on our ship had seen Armand de Brignac before, but most were won over by the complexity and sheer deliciousness of the wines.

Unlike other winery-hosted tastings we've attended on other cruise lines, passengers couldn't buy a bottle of Armand de Brignac to drink on their own. We suspect Dhainaut could have sold a few, given the oohing and aahing over the fancy metallic bottles, and the rate at which people snapped up the special Ace of Spade stickers made available. While it's possibly a missed opportunity for the Champagne house to make a quick buck, we appreciated that no attempts were made to upsell us or convince us to join a wine club.  The wines were presented in a fun, low-key atmosphere, which is what SeaDream Yacht Club is all about.

For $85 per person, passengers could sign up to have Armand de Brignac paired at each course for a special Winemakers Dinner. Passengers didn't have to have Champagne to enjoy the dinner, only a few opted out of the experience.

Champagne-paired meals seem to be on the rise on luxury cruise ships, with Oceania offering a Dom Perignon tasting experience on two of its ships, Riviera and Marina. These high-end meals are a great way for people to realize that Champagne and other sparkling wines aren't just for celebratory occasions; you can pair bubbles with almost any kind of food. (We've even enjoyed it with potato chips and popcorn.)

The real culinary standout was a white tomato cappuccino, paired with Armand de Brignac Blanc de Blancs, the brand's "gastronomic" Champagne, Dhainaut said. We were lucky enough to sit at his table, and we saw him perk up when he tasted the two in concert. He had reviewed the menus ahead of time, but he said he gave Head Chef Tomasz Kozlowski free reign -- and what emerged was an exciting pairing.

Another standout came at dessert, when a key lime pie was offered with the Demi Sec. Demi Secs have more sweetness in them by design, but when matched with tart lime, the two tastes blend into a perfectly balanced bite. The huge grin on Dhainaut's face showed that the chef got it exactly right.

The portions of Champagne were generous, thanks to affable sommelier Frank Kis, and the dining room grew more raucous as the evening wore on. While the SeaDream Yacht Club crowd is certainly well-heeled and, we suspect, not a stranger to high-end Champagne, it's special to be able to do a deep dive into one particular house (and, if you can afford the price, seeing what you might want to drink in the future). Experiencing the wines with such a well-developed pairing menu was worth the dinner's extremely reasonable extra cost.

Wine Voyage Worth It?

So is it worth going out of your way to find a SeaDream Yacht Club wine voyage? As wine fans, we'd say yes, particularly on a Mediterranean itinerary that also has wine-themed excursions. (On our Caribbean sailing, the brochure said we'd be doing a cooking class at CuisinArt in Anguilla, but there weren't enough passengers onboard to make it happen.)

What made SeaDream's wine voyage stand out to us is the sheer casualness of the whole affair. We suspect it's because SeaDream is already an all-inclusive line; with no chits to pay for drinks at the bar or at dinner, there's a lovely ease to tippling onboard.

The line also has an extremely decadent Champagne and caviar beach party once per voyage, and your glass is kept as full as you want it onboard. The lack of wine snobbery allows the whole experience to feel more natural -- and, as a result, a lot more fun.

To read why we think it's an excellent idea to spend a holiday on a luxury cruise line, check out our SeaDream Thanksgiving report.