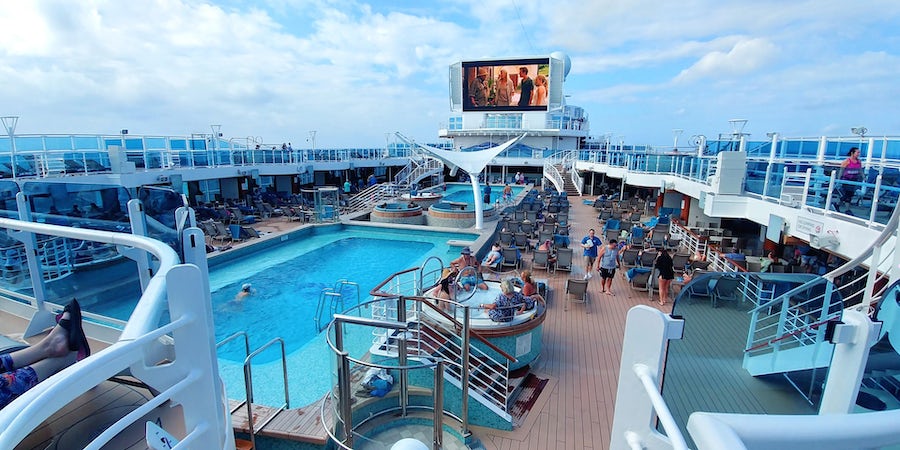 Though it's only been two years since Princess Cruises launched a new ship, Sky Princess is the first vessel in five years that the line has targeted to an English-speaking market. (While its last new ship, Majestic Princess, sails in Australia, it was built primarily for an Asian audience.)

Cruise Critic is onboard Sky Princess' North American inaugural voyage checking out all that's new, as well as the tried and true favorites, to see what a cruise on Sky is all about. (We were also on the ship's shakedown cruise in Europe.)

Here's what we thought stood out the most, and what, perhaps, Princess missed the boat on.

This French eatery is the brainchild of 3-Michelin star chef Emmanuel Renault and is much more casual than you might expect. Rather than a fine dining restaurant with a fancy date-night vibe, Bistro Sur La Mer (referred to as the French Bistro on wayfinder signage) is located along one side of the busy Deck 7 walk-through promenade. If you're not paying attention, you'll pass right by it, thinking you simply passed a bar with table seating, not an eatery with some of the best food onboard the ship.

There's nothing intimate about it; it's loud, with music wafting up from the Piazza two decks below, and there's a steady stream of people passing by, most noticeable if you're seated at a table at the outer edge of the space. But all of that lends itself to a relaxed sidewalk bistro feel that's rather enjoyable. It's definitely more chill with friends over a glass of wine (oenophiles will love the wine list from master sommelier Doug Frost) than romantic anniversary dinner date.

The adults-only Retreat on Sky Princess is a treat for anyone who wants a quiet spot to sun or take a dip, without having to pay the extra fee that the Sanctuary requires. The pool is sizeable, perfect for doing laps, there's a dedicated bar so you don't have to go far for a drink, and you can find plenty of shade (or sun) if you want it. You'll also find a handful of cabana-like structures for half- or full-day rental on the second level of the Retreat, overlooking the pool. They don't come with much other than plush loungers and an overhead fan, and they offer no shade as the entire structure is latticed and open to the sun.

While we think the Retreat is a better value, the popularity of the Sanctuary can't be overstated. Snooze until the second day and there's a good chance you'll lose out on loungers and cabanas, all of which come with a price and must be reserved. (Fees are $20 for a lounger for a half day and $140 for a cabana for a half day; full day rentals are also available.) The space is lovely, though, with a hot tub and a plunge-style pool, and the loungers are plush and comfy. Sanctuary cabanas have a TV, mini-fridge, fruit bowl, chairs, a loveseat and two loungers, but come with that hefty price tag.

A design element on Sky Princess that we love are the framed photographs you'll find in every cabin and along cabin corridors. All were taken by past Princess passengers who entered their pics, taken during a Princess cruise, into a competition. Each deck has a different theme; for instance, Deck 11 is all destinations you might visit on a Northern Europe cruise. Other decks are all Alaska or all Caribbean. Each photo has the first name and last initial of the photographer. We think it's a great way to showcase all the destinations Princess visits through the eyes of its passengers.

This theater-style lounge is more than just a space for the cruise director to record his or her morning show. It's also the spot for almost all of the ship's interactive entertainment including music-themed and regular trivia, karaoke, the High Seas Heist and more. It's cleverly located right along the Deck 7 indoor promenade with one side entirely open so anyone passing by can see and hear all the fun participants are having. It's easy to get sucked in.

Sky Princess features three new-to-Princess stage shows, all of which are a departure for the line from its more traditional song-and-dance revues. We got to see 5-SKIES, a high-energy musical that follows a gamer, Player 1, as he navigates through five levels of a virtual reality game. It's full of straight-from-the-radio music, over-the-top costumes, fierce dance moves, aerial acrobatics and a slick bungee dance sequence unlike anything we've seen before.

While the story is a bit silly, the dancing and singing are spot on and it's an enjoyable 90 minutes. We weren't quite sure how the show was going to go over with the mostly over-65 crowd and we heard more than a few confused folks trying to figure it all out when it was over, but there was plenty of whooping and hollering. About a quarter of the audience gave the cast a standing ovation, so we'd say it was a success.

As the first Princess cruise ship with the OceanMedallion system built into it from scratch, Sky Princess has super speedy MedallionNet Wi-Fi. We've been using it to upload photos and videos, post to social media and make WhatsApp phone calls, and it's all been fluid and effortless. It's a real game changer for anyone who wants to stay connected.

We're also pleased to see that some of the OceanMedallion functionality has improved since we were last onboard a month ago. An expanded drinks menu can now be ordered from almost anywhere onboard, as can several retail products. (We were sorely tempted to test this on a box of Godiva chocolates on sale from one of the stores.) However, very little of OceanMedallion has worked without a hitch (see Misses below).

After seeing a 20-minute demo of Sky Princess' new escape room experience, Phantom Bridge, we wanted to put it into our Hits but since the system is not actually up and running yet, we have no way of knowing if it will operate as advertised. If it does, it's going to be one of the coolest escape experiences we've ever come across.

Driven almost entirely by digital elements (rather than physical things you need to manipulate), the experience, which has up to six participants trying to get through three scenarios in a 30-minute window, is dynamic and can be changed on the fly depending on who is participating and how well they're doing. If a group is struggling, the system can automatically make the puzzles a little easier, or vice versa if a group is flying through too quickly. Additionally, several elements of each puzzle are randomly generated so you can do the experience several times and never be looking for the same things.

While libraries are becoming a thing of the past on many of the largest cruise ships, it is surprising that Princess did away with one on Sky Princess. With its older and more sophisticated clientele, a library is something that is appreciated and used by many Princess passengers. The ship wouldn't even have needed a big one, just a spot with a few comfy couches for reading, shelves for cruisers to leave behind or pick up a book and a desk for daily puzzles.

Princess continues to struggle with getting OceanMedallion to work exactly the way it's supposed to. The Medallion itself is fine; it opens your cabin door, can be scanned to pay for items and identifies you so crewmembers can call you by name, but the apps continue to be wonky and frustrating at times.

To use Ocean Compass (the wayfinder and cruise chat app), we have to re-log-in (ie, enter our first and last name, cabin number and birthdate) every single time. Even if we don't close the app, after 10 minutes or so we have to re-log-in. If you're trying to stay in touch with someone, it's exasperating.

Order Now, which lets you order drinks and retail goods to be delivered wherever you are, works some of the time but not others. We've successfully had a soda delivered to us in the buffet, but an order we placed for a Take 5 specialty drink (while sitting in Take 5) was never picked up by a server to be filled and we canceled after a half hour of waiting for someone to acknowledge it.

Even the crew-side apps don't seem to be working, or the crew aren't using them as they're supposed to. Case in point, despite the fact that we put in the Ocean profile that we're gluten-free, not one waiter has asked us about it or warned us if we ordered a food item with gluten in it.

All the cabins onboard Sky Princess are beautiful and modern. We love the number of USB ports and outlets and, of course, the Princess beds are among our favorite at sea. But at a time when cruise lines are looking to new designers to come up with clever ways to make the most use of the space available in each room, we were disappointed to find Sky Princess has the same old layout Princess has been using forever. For those in standard cabins (not mini-suites or suites) that means two or more people are sharing a handful of drawers, a few shelves and one long closet. We think this is one area in which Princess could have done better