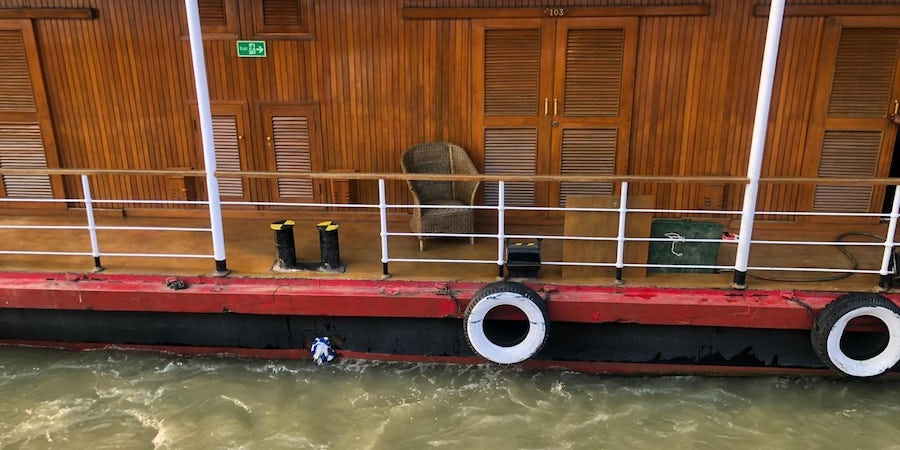 Kindat Pandaw is evacuated on the Ganges.

Kindat Pandaw is evacuated on the Ganges.

(Updated: 2 a.m. EST) -- A Pandaw river vessel has crashed into a pontoon on the River Ganges forcing the evacuation of everyone onboard.

Kindat Pandaw ripped a pontoon bridge off its hinges at Patna and passengers are currently on a sandbank nearby while crew remove their luggage and safes from cabins.

Paul Strachan, Pandaw Group Founder, has said in a statement to Cruise Critic: "Indeed there was a very minor collision with a pontoon bridge on the Upper Ganges and the hull was holed above the waterline. The hole is just a few inches diameter and has been plugged (with a towel!) as you can see from the attached photo (shown below).

"A welder is on his way to seal it. At no point were passengers at risk and they were disembarked only as a precaution. On Pandaw remote river expeditions such adventures are part of the course and part of the adventure as any seasoned Pandaw traveller will attest."

Cruise Critic contributor Sue Bryant, who was onboard the vessel said: "We were accommodated in a hotel in Patna last night and are continuing our journey to Varanasi by bus. We’ll spend two nights there in a hotel and are now back on schedule. We’re hoping that all the planned sightseeing will take place, as Varanasi is the highlight of the trip for many."

Describing the incident, she said: "The Ship was towed off the bridge by two tugs and then crashed into a barrage tied to the shore.

"Huge crowds of locals scattered when we thought it was going to crash into the sandbank we’re stuck on. Now it’s been towed off and it’s getting dark and we’re stuck on this sandbank not knowing what’s going on."

She added: "Passengers have developed a spirit of the blitz, especially as a lot are very elderly."

Major crash on the Ganges and Kindat Pandaw has ripped a pontoon bridge off its hinges. All passengers ashore but we’re shaken. Not sure if ship is taking on water... pic.twitter.com/phbALhZCOL

The 40-passenger Kindat Pandaw is the first of two shallow-draft K designs from Pandaw, which plies the Ganges as far as Bangladesh.

This is a live story and we will update as we get more information.