You may also like
Dismiss
Live From The 80s Cruise: Why A Music Theme Cruise is the Best Party at Sea
Live From Star Pride: 10 Reasons Why the Windstar Grand Prix Cruise is Special
Live From Princess Cruises: Celebrating 50 Years of Cruising Alaska
Live From Oceania Insignia: Why A Western Caribbean Cruise Can Be A Perfect Spa Vacation
Just Back From SeaDream Yacht Club: What It's Like Cruising on a SeaDream Wine Voyage
Live From Carnival Panorama: First Impressions of Carnival's New California-Based Cruise Ship
SeaDream Yacht Club Eyes November Restart for Caribbean Cruises
Stressed? So Are We. Let's Plan a Cruise
Cruise News Roundup: Holland America, Norwegian Restart Additional Cruise Ships; SeaDream Returns to Cruise the Caribbean 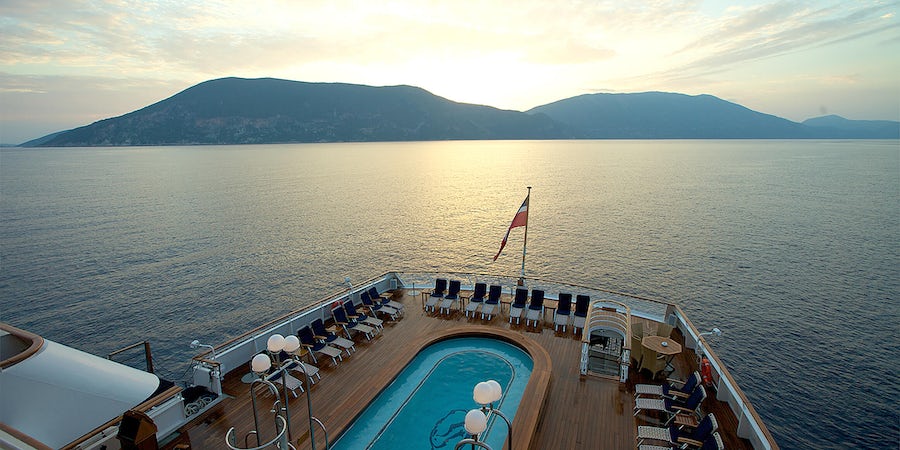 Live From SeaDream Yacht Club: Six Reasons Why a Luxury Cruise Is Perfect For Thanksgiving

(7:50 a.m. EST) -- Thursday’s dishes and cooking pans may or may not be put away, and if you’re still eating leftovers, then turkey is the last thing on your mind right now. If the holiday hosting crush has you thinking “why am I always stuck doing this?” let us suggest that now is the best time to think about planning a luxury cruise away over Thanksgiving next year instead.

This is the second time that we’ve ditched the pots and pans for caviar and Champagne. Two years ago, we sailed on Silversea’s Silver Muse, cruising between Buenos Aires and Rio de Janeiro. This year, we splashed out on SeaDream Yacht Club’s SeaDream II, hitting all of our favorite sunshine spots in the Caribbean. After both experiences, we’re looking to make this type of turkey trip a biennual tradition.

Intrigued? Read on to see why Thanksgiving at sea, particularly on a luxury cruise ship, is the ultimate holiday gift you can give -- yourself.

Thanksgiving is an extremely popular time to cruise -- on a mainstream line. Any time that kids are out of school, you’ll find the ships with waterslides and go-kart tracks packed to the brim. The opposite holds true on the smaller luxury ships. Most have cheaper rates during the Thanksgiving week, and far fewer passengers; on SeaDream II this week, there were a mere 31 passengers, out of 112 berths (both the week before and the week after Thanksgiving, numbers went back up to normal). With 90 crew onboard, we enjoyed a 3:1 ratio, which led to phenomenal service and an even more intimate atmosphere that you’d normally enjoy.

Very few children travel on small luxury ships at any time of the year. But at Thanksgiving, the numbers can be nil. Neither of our T-giving travels had any young children onboard at all (and these are not lines that restrict kids). Conversely, we met plenty of families celebrating the holiday with their adult children, as well as groups of siblings who were looking for something different (particularly after a parent passed). If the noise and chaos of the kids table is something that you hate -- or your kids can’t get away from jobs or school to make it home for the holiday -- treat yourself and celebrate just the two of you.

We personally love our family, and will happily be spending time together in December. But a Thanksgiving cruise is perfect for those for whom the holidays aren’t quite so happy. Our Silversea cruise proved to be just the antidote for a friend who was facing a table for the first time without a significant loved one. Likewise, we’ve met passengers onboard going through divorces for whom a luxury cruise without the judgment of extended relatives is a true blessing. If you’re grieving in any way and want to nip those holiday blues in the bud, it’s hard to do better than a luxury cruise.

Thanksgiving is an American holiday, and so it’s more likely that you’ll have an international contingent onboard a luxury ship over this particular week. On SeaDream, we met a group of Norwegian friends and their wives who didn’t say much during Happy Hour, but were mainstays at the piano bar every night. Who knows, you might even serve as a cultural ambassador; on Silver Muse, we introduced an Australian couple to the wonders of pumpkin pie (it’s not as common in other countries, who see it more as a squash than a dessert ingredient). Introducing your traditions to others -- and hearing about theirs in return -- is much more fun than listening to any type of political argument you know your brother-in-law will instigate.

Planning a Thanksgiving meal is an exercise in project management; on the years we cook, we have a notebook laid out with a de facto battle plan on how to get it all done. But after a busy fall, the last thing we wanted to do was to plan a meal for a dozen people. Don’t worry, all luxury cruises will make sure that the Thanksgiving stalwarts -- turkey, cranberry sauce, mashed potatoes, stuffing and pumpkin pie -- are available for you, if you crave them. Who knows, maybe you’ll even get some chef-y inspiration for next year. And while you don’t have leftovers for munching, you also don’t have dirty dishes to clean and put away.

The most important reason to take a luxury cruise over Thanksgiving is simply to get some rest and relaxation. There’s still plenty of holiday cheer -- and chaos -- left through the rest of the year. Knowing that we’ll be facing the usual December craziness with low stress levels (and a nice tan) makes us ready to book a Thanksgiving cruise again.