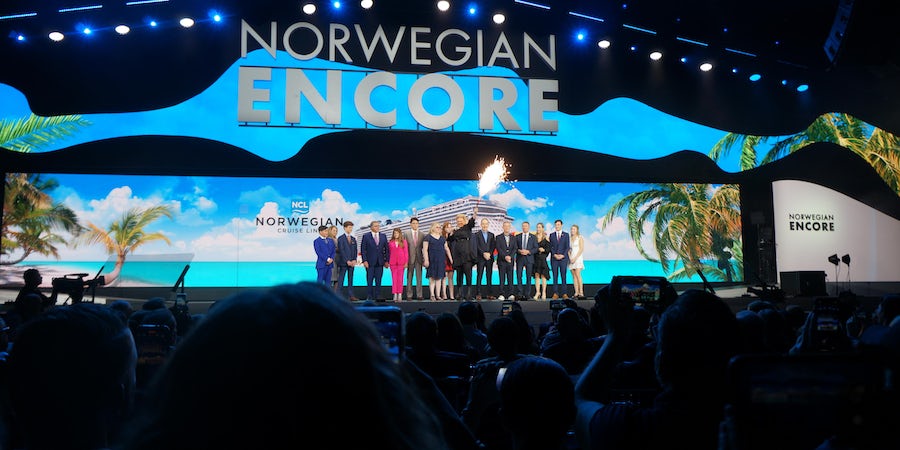 (8:20 p.m. EST) -- With a wave of a wand and a smash of a Champagne bottle, pop star Kelly Clarkson successfully named Norwegian Cruise Line's newest Breakaway-Plus class ship, Norwegian Encore, in a pierside ceremony in the ship's new home of Miami.

The gala event -- attended by dignitaries, cruise line executives, media and travel agents -- honored the ship's spirit, with ovation-worthy performances, plenty of drinks and snacks and a shoutout to sustainability.

The pre-event experience featured music, creative Instagram spots highlighting the ship's hull art color scheme and the ultimate in Freestyle dress code -- models in "skirts" made of Norwegian's sustainable plant-based cartons of water. (Norwegian proudly states that the ship is the first large cruise ship to be free of single-use plastic water bottles.) Attendees noshed on paper cones of salty snacks and drank Champagne as they made their way into the terminal for the main event.

The show featured performances by Norwegian's own showstoppers, Choir of Man and the cast of Kinky Boots, as well as a number by Light Balance, a glow-in-the-dark dance team seen in America's Got Talent. It was hosted by sister ship Norwegian Bliss's godparent, radio personality Elvis Duran and one of his co-hosts Froggy; the former even dared to don a pair of thigh-high red glittering boots between acts.

As much as the christening ceremony was about the launch of Norwegian Encore, it was also about two transitions happening for the line. Norwegian's CEO Andy Stuart will be stepping down and handing the reins to incoming CEO Harry Sommer, just as the company launches its last Breakaway-Plus ship and gets ready for the new Leonardo class debuting in 2022. Stuart, Sommer and NLCH CEO Frank del Rio all spoke about their regard for each other and their excitement about the ship and what's coming for Norwegian Cruise Line.

They also spoke about the new Norwegian cruise terminal debuting in Miami next spring, which del Rio believes will be iconic and an Instagram hit.

After a priest and rabbi blessed the ship, it was time for the main event. But where was the Champagne? A video showed Stuart grabbing a bottle, hopping into a race car from Encore's upper-deck go-kart track and driving to the terminal -- where he then roared onstage in real life in his red go-kart.

With the day saved, the eagerly awaited godmother Kelly Clarkson made her big entrance. She spoke about how Encore is the perfect family vacation for a family like hers with kids from 3 to 17, and praised the River Rose Reading Room, named after her daughter, in the Guppies under-3 play area. (Clarkson, daughter of a teacher, is a huge advocate of reading with young children.) She told the audience how Encore is the perfect ship for her because it's Norwegian's 17th ship and it's been 17 years since she won American Idol, but told Duran that she was sad she didn't actually get to smash the bottle of Champagne because "I like to break stuff."

Then she blessed the ship, waved a wand (she wanted to put the fairy back into godmothering), sparks flew and the video screen captured the successful smash of the Champagne bottle against the ship's hull. The party ended with a bang as Clarkson performed a short concert of several of her hit songs, while the audience batted giant color-changing beach balls around and sang along.