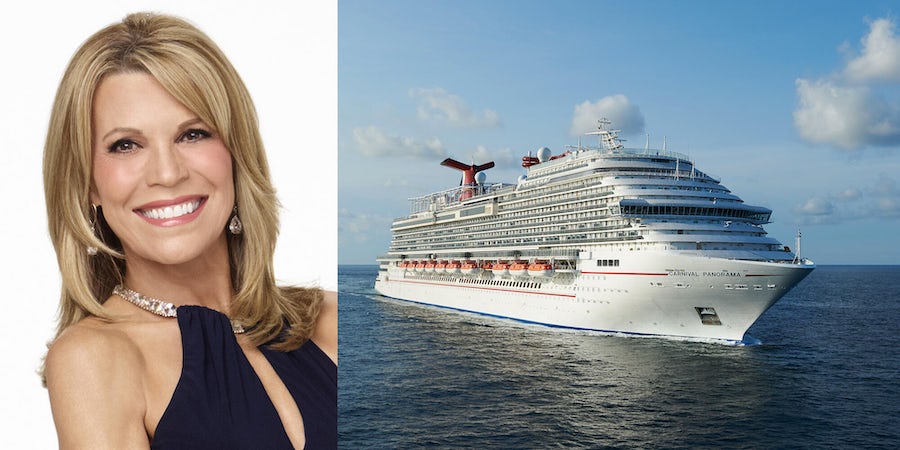 (10 a.m. EST) -- Popular gameshow host Vanna White has a new gig, one that doesn't involve a spinning wheel and giving away prizes. As the newly-announced godmother of Carnival Panorama, White will officially give the ship its name at a ceremony in Long Beach, California on December 10, 2019.

White has been the co-host of "Wheel of Fortune," alongside Pat Sajak, since 1982, and has appeared in more than 7,000 episodes. She has a star on the Hollywood Walk of Fame and been inducted into the Broadcasting Hall of Fame.

"Vanna has been the welcoming face, cheering on and watching over 'Wheel of Fortune' contestants for decades, and we love that Vanna will be doing the same for Carnival Panorama, her guests and crew, as the ship's godmother," said Christine Duffy, president of Carnival Cruise Line.

White is no stranger to Carnival Cruise Line. She and co-host Pat Sajak have been onboard Carnival ships to tape segments of "Wheel of Fortune" as part of several cross-promotion partnerships between the brands over the past several years. (Don't expect to see Pat Sajak, White advised Cruise Critic. She plans on inviting him onboard after he's recovered from a recent surgery.)

"I'm just so thrilled," White told Cruise Critic in an exclusive interview. "It's an honor and I can't believe it's actually happening."

White said it was an easy decision for her when approached by Carnival to be godmother to Panorama.

"Not only with their ships and how great they are to their passengers and their reputation, but also Carnival gives back to St. Jude's Children's Research Hospital, which is the charity that is near and dear to my heart. So that made it easy to make that decision. I just knew we were meant to be partners."

(White has a line of yarn called "Vanna's Choice," with a portion of all proceeds from its sales benefiting St. Jude's.)

White is as famous for her stunning gowns as she is for her longevity on the show. When asked what cruisers can expect from her wardrobe at the naming, White told Cruise Critic she wasn't quite sure yet.

"I know it will probably be at least a cocktail dress. I might change a couple of times and I'll have on high heels as well," she said, adding she might choose to surprise everyone, including having a pair of flats (something she's never seen wearing on "Wheel of Fortune") to slip into as she walks from place to place on the ship.

Among the onboard highlights White will be exploring on Panorama are the Sky Zone trampoline park, a SkyRide, a WaterWorks aqua park and ropes course, Guy's Pig & Anchor Bar-B-Que Smokehouse and Brewhouse, and a variety of room categories including Cloud 9 Spa staterooms, Havana Cabanas and the keycard-protected Family Harbor section of cabins.

But White said she's most looking forward to trying out the line's recently announced first-ever Carnival Kitchen cooking classes.  She did, however, add she's not opposed to some of the line's more active options.

"I'm thinking about doing the SkyRide. I'm not really much of a daredevil, but that sounds really intriguing and my nerves are calming down. I think I can do it. I'm more excited about going to the Cloud 9 spa afterwards to get a nice relaxing massage afterwards."

Carnival Panorama, the third and last vessel in Carnival's popular Vista Class of ships, departed the Fincantieri shipyard in Italy on November 1, 2019 and is en route to Long Beach. The ship will be homeported year-round in Long Beach, offering week-long Mexican Riviera itineraries. It is the first brand new Carnival ship to be deployed to the West Coast in 20 years.