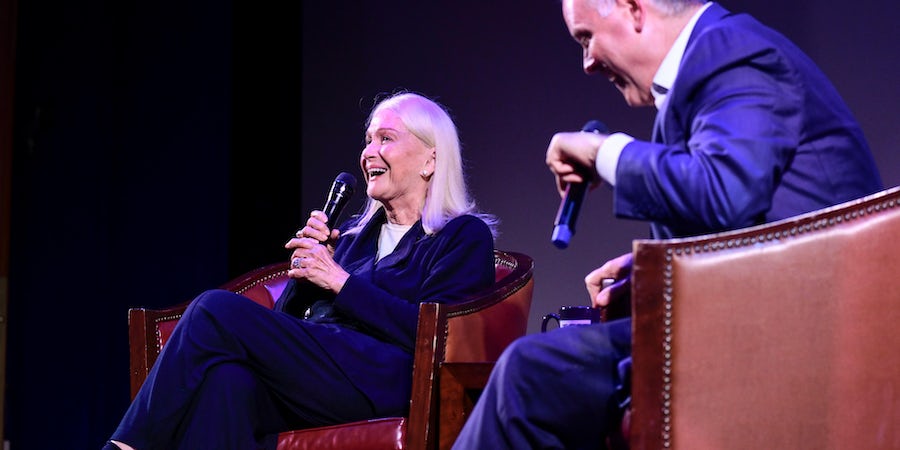 Just Back from the TCM Cruise: Diane Ladd Is Cruising's Newest Convert

(1:15 p.m. EST) -- Diane Ladd can measure the miles she's traveled in the hundreds of thousands.

The three-time Oscar supporting-actress nominee ("Alice Doesn't Live Here Anymore," "Rambling Rose" and "Inland Empire") constantly travels to movie and TV sets for work. Typically she goes by air, auto or rail. Going by ship was out of the question -- even for a pleasure cruise. It is not as if the subject never came up. It was more like, "No, nuh-uh, not happening, don't even ask."

"I didn't want to do cruises before," she pauses between words, "because…I have… a…deathly fear…of…sharks."

The operative word is "before." Because Ladd, a waterfall of silvery-white hair cascading past her shoulders, is talking from an elegant lounge on cruise ship Disney Magic on her way back to New York from Bermuda. She is one of three movie celebrities (the others are Mitzi Gaynor and Cicely Tyson) invited aboard to share their movies and the stories behind them on Turner Classic Movies' 7th Annual Cruise. Where cruising is concerned, she has had a complete turnaround.

"I didn't understand cruising. Now I do. You're floating. There's no stress," she says. "No sharks. Just the Atlantic." It's too bad it took her 83 years to figure out what cruise fans have known for decades.

One surprise to her is the serendipity of meeting others aboard the ship. She could leave her cabin and meet guests who ask her questions they didn't get to in public interviews. She could "just hang out" and get to know movie people like Gaynor and TCM host Alicia Malone. "So much fun!" she enthused.

For someone who was once petrified to step aboard a cruise ship, Ladd is positively gushing about the Turner Classic Movie cruise experience. She loves TCM programmer Scott McGee's thoughtful slate of films screened onboard, including several of her own. She gets right into the Disney cruise spirit, dressing up as Morticia from the Addams Family during the sailing's onboard Halloween celebration. (Her family members onboard join her for a group costume.)

She has kind words for the TCM Cruise's organizers and passengers. "I've never in my life seen such gracious people. You can feel the love -- for movies, for the other passengers. It's incredible. Everybody's always in a good mood."

The warm feelings are mutual. When Ladd sits for a public interview on Disney Magic, you can feel the audience's admiration of the Mississippi-born character actress whose breakthrough role was Flo, the tough-talking Tucson waitress in Martin Scorsese's "Alice Doesn't Live Here Anymore" (1974).

She speaks with Eddie Muller, TCM host and Czar of Film Noir, about her work in Roman Polanski's "Chinatown" (1974), in which she played a critical role -- as a corpse -- in one of the film's pivotal scenes. She acknowledges with appreciation the film knowledge of both the hosts and the audience, who were less interested in the glamour of movies than what it was like to be a working actress. "I mean, when I got into the business, I got the parts where you got murdered or raped or were a prostitute," she tells her enthralled listeners.

"I love the interviews. I love being on this ship," she smiles, adding, "and I'm not auditioning for a job as the TCM mascot." Diane, you could have fooled us.

In short, this celebrity actress is very happy she changed her mind about cruising. "I feel so spoiled with kindness that instead of debarking, I'm going to hide on the boat." Watch out, cruise world, you've got a new convert.