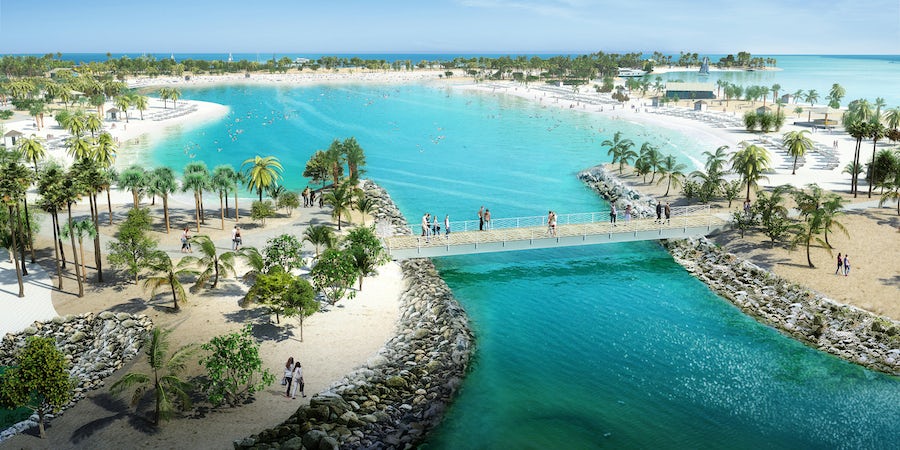 The MSC ships that were scheduled to call on the island before December 5 will be rerouted to alternative Caribbean destinations or will add a sea day to their schedule. All booked passengers will be compensated for the missed call at Ocean Cay.

"...Despite Hurricane Dorian and the demobilization of 600 workers, the Company took measures to remain on track and deliver the project on time. However, in the weeks that followed, further adverse weather conditions with strong winds and heavy swell caused several days of interruptions and created additional delays," MSC said in a news release. "This included heavy weather in early November which required part of one of the beaches to be further reinforced."

The statement also cited "last-minute issues with the leveling of the sand in certain areas of the island, the completion of the second breakwater and the landscaping aspects to be fully in line with the Company’s exceeding environmental criteria, have created further last-minute operational issues that could impact the guest experience."

Passengers on impacted sailings are being provided with an onboard credit of $100 per stateroom and a discount equivalent to 20 percent of fare paid on the impacted voyage that can be put toward a future MSC cruise.

In a statement to Cruise Critic, MSC Cruises said, "This has been an extremely complex project as MSC Cruises has been fully committed to developing the destination in the most eco-friendly and sustainable way. While we fully anticipated that the island would be ready to receive guests this week, upon further evaluation with our onsite team and learning about last-minute operational issues that could impact the guest experience, we made the decision to cancel scheduled calls at Ocean Cay."

"Our work on the island is an on-going process as our commitment to protect, restore and conserve this beautiful cay is part of a multi-phased effort."

On the Cruise Critic message boards, reaction to the news ranged from those who felt the compensation was adequate to those who were annoyed at the continued delays with the opening of the island.

"I knew going into this voyage when I saw the photos leading up to it that I likely wouldn't be stopping at OC," wrote member CruisinMaterial.

Rob-Bob pointed out that some cruisers have been trying to get to Ocean Cay for a while now. "I booked in 2016 expecting to stop at OC in March 2018….This is getting ridiculous."

"Is anyone really shocked? When do things like this ever open on time? Particularly in the leisure industry!" asked poster citizenfrank. "Yes it's a shame and I'm not undermining anyone's disappointment but it's why you wait if this element is critical."

Ocean Cay has been in development for several years since MSC purchased the former industrial site in the Bahamas in 2015 with the intent to turn it into a world-class private island. Originally slated to open in December 2017, the island's opening has been pushed back several times.

Once open, MSC intends for the island to have a Conservation Center and thriving coral nursery that will serve as an active base for coral education and research, alongside plenty of facilities for passengers to relax and enjoy the tropical waters of the Bahamas.