You may also like
Dismiss
First-Ever Cruise Ship Godfamily Christens Symphony of the Seas in Miami
Viking River Cruises Christens 7 New Ships
Hall & Oates to Perform on Royal Caribbean’s 50th Birthday President’s Cruise
Just Back From Sky Princess: Shaking Down a New Cruise Ship
Just Back from the Newly Refurbished Oasis of the Seas: Still at the Top of its Game?
Surprise and Familiarity Abound as Cruising Returns: Just Back From Freedom of the Seas
Cruising with Both Vaccinated and Non-Vaccinated Passengers: Just Back from Freedom of the Seas
Royal Caribbean To Put Volunteers On Upcoming Test Cruises
Silversea Cruises News: Silver Moon Christened, and Cruise Critic is Onboard
Live From Royal Caribbean's Odyssey of the Seas: Why You'll Never Be Bored on This Cruise Ship 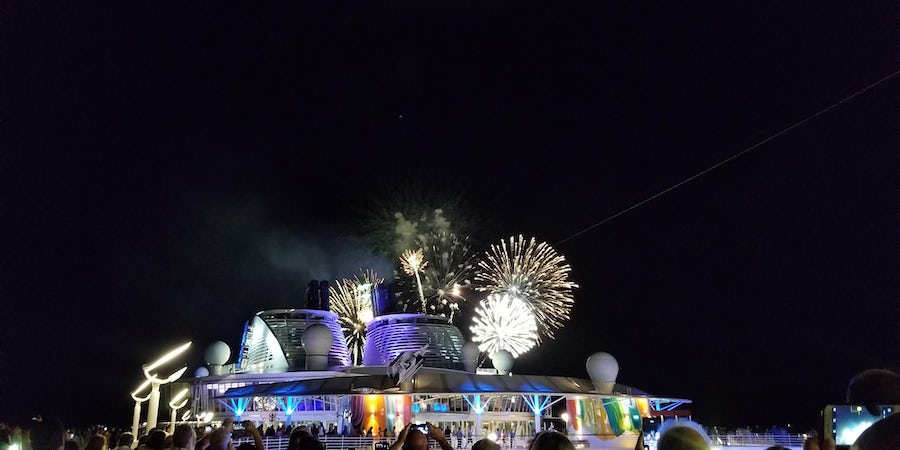 To celebrate Royal Caribbean’s 50th birthday, passengers on Symphony of the Seas were treated to a fireworks display (Photo: Colleen McDaniel/Cruise Critic)

Just Back from Symphony of the Seas: 6 Reasons You Should Sail on a President's Cruise

To celebrate Royal Caribbean’s 50th birthday, passengers on Symphony of the Seas were treated to a fireworks display (Photo: Colleen McDaniel/Cruise Critic)

What do you get when you cross a President's Cruise with a cruise line's 50th birthday bash onboard the world's largest cruise ship? You get the biggest party at sea.

Several thousand Royal Caribbean passengers just completed an Eastern Caribbean sailing on Symphony of the Seas with president Michael Bayley, who was onboard for a week to answer questions directly from cruisers as well as celebrate the line's golden birthday. He also brought along some of the line's top executives, including senior vice president of hotel operations, Mark Tamis, and senior vice president of entertainment, Nick Weir.

Cruise Critic was onboard, too, joining more than 5,000 fellow cruisers -- some 3,000-plus of which are Royal Caribbean's most-dedicated fans and part of the top tier of the line's Crown and Anchor Society loyalty program.

President's cruises are offered annually by many cruise lines. While not every voyage offers the added festivities that come with a milestone birthday, here are 6 reasons you should sail with your favorite cruise line's president.

1. You Get Unfettered Access to the Executives -- Who Really Do Listen to Feedback.

Bayley, Tamis and Weir were literally everywhere on Symphony of the Seas, walking around the ship during the day, hosting dinners at night and visiting with passengers over drinks. Plus, they popped up at casual events to pitch in or grab a mic, as well as hosting a scheduled Q&A. And while they certainly could have elected to use crew corridors to move from A to B, they didn't. This means people could -- and did -- stop them to talk. (We're pretty sure Michael Bayley couldn't move more than 10 feet at a time without being stopped by a passenger; he always graciously engaged in conversation.)

This approach is by design. Royal Caribbean aims to get passenger feedback from cruisers, whether they are new to the brand or already as loyal as they come. Each morning, the Royal Caribbean team met to talk about the conversations they'd had with passengers and decide which bits of feedback -- large or small -- required action. For example, they heard from passengers there wasn't enough shade in the ship's Solarium, so umbrellas were out the next day, Tamis said.

2. You'll Sail with the Most Line-Loyal Cruisers Around.

While we ran into several new-to-Royal-Caribbean passengers, President's cruises have a special appeal to loyal travelers who love the cruise line and have multiple sailings under their belts. Our sailing saw upwards of 3,000 Diamond, Diamond Plus and Pinnacle Club members onboard representing the top-echelon of Royal Caribbean cruisers. (Bayley calls these cruisers "guardians of the brand.") Even, cruising legend "Super Mario," who essentially lives onboard Royal Caribbean's cruise ships year-round, was there for the celebration.

With so many expert Royal Caribbean cruisers onboard, you'll never have a better chance to discover some of the secrets these dedicated Royal Caribbean fans have discovered over the years. Don't be shy about asking them about their cruise tips; most of them love to talk cruise.

Our sailing also offered an enormous Meet & Mingle gathering of Cruise Critic members, who had signed up for a private party through our site and had met and chatted with fellow cruisers online using the sailing's Roll Call. Hosted by the cruise director and activities director, the session was so large (more than 500 people signed up), it took place at the ship's AquaTheater rather than the smaller Jazz on 4, where it's typically held. While passengers enjoyed mimosas, prizes, including passes to the water park at Perfect Day at CocoCay, dinner for two at various specialty restaurants, Champagne and a diamond pendant, were raffled off. Bayley even showed up to quietly watch from the back of the theater.

4. You Get the Inside Scoop.

Early in the cruise, Bayley held court at a nearly two-hour "Common Grounds" event in the Royal Theater. A packed house took the opportunity to pepper the president with questions. To kick things off, Bayley showed an old commercial featuring Song of Norway, Royal Caribbean's first ship. The cheesy ad featured a glimpse of onboard skeet shooting and lido deck fitness classes. Bayley joked about the ship's now-iconic buffet, Windjammer: "Remember when Windjammer on Song of Norway was a hole cut in the steel and two guys frying burgers?"

Questions ranged from "Would Royal Caribbean consider a world cruise" (maybe as a one-off, Bayley said, adding they don't make money on those kinds of cruises) to "When might we get a loyalty program to use across your sister brands -- Azamara, Celebrity and Silversea?" (The company hired a consultant and has come up with a hybrid solution that improves loyalty across brands but is not a complete combination, Bayley said.)

Passengers also got a chance to "vote" on the next President's Cruise, with options including some, er… less-desirable options: a two-day Empress of the Seas sailing "ahead of drydock" and a 30-day sailing on a competitor brand "with 29 sea days." The winner -- this one might have been rigged, folks -- was an October 25, 2020, voyage on Allure of the Seas through the Western Mediterranean. After the announcement, passengers flocked to the future cruise desk onboard to purchase the cruise, according to Royal Caribbean.

Bayley also mentioned the cruise line's next new class of ship, the Icon Class, which will debut in 2022. He declined to give away details about the 5,000-passenger ships except to say they are "super amazing" and will be an evolution of the Oasis Class. "It's going to be a stunner," Bayley told Cruise Critic.

Raffle tickets were handed out to all attendees, and Royal gave away prizes throughout the Common Grounds presentation and Q & A, with passengers getting specialty dining, swag bags, onboard credit and one grand prize of a cruise for two on Odyssey of the Seas.

5. You'll Celebrate Over and Over.

No doubt, this cruise was about celebrating, and Royal Caribbean made sure passengers had multiple chances to join in on the fun. The ship's Royal Promenade was generally the hub of activity, hosting multiple balloon drops and serving as the backdrop for amazing photos. To celebrate the line's birthday, the ship rolled out a beautiful, multitiered golden cake, which was cut in front of a huge crowd in the Royal Promenade.

The culmination of the celebrations came the last night onboard, when rock and roll Hall of Famers Daryl Hall and John Oates performed at the Royal Theater, playing hit after hit at an uber-intimate venue. (Hall even told the crowd the band could see everyone there, and Oates proved the point, nodding and mouthing "Thank you" to a woman wearing a Hall & Oates T-shirt.) The theater was at capacity, so satellite venues were set up across the ship so people could watch and sing along as the duo performed smashes like "Rich Girl," "Maneater" and "You Make My Dreams."

After the concert, Royal Caribbean unleashed a fireworks show so good, even the crew took a couple of minutes to head out to the decks to enjoy.

6. You'll Walk Away With Great Gifts and Excellent Memories.

The theme of the cruise was "50 Years Bold," a nod to the company's anniversary. It was impossible to miss the theme, with the slogan posted all over the ship. Royal Caribbean treated its passengers to a new gift, left in their staterooms, each night. Items included logo hats, beach towels, tote bags and lapel pins, and we saw passengers proudly using their new swag right away.

We also loved that Royal Caribbean set up a dedicated memory book (by the Schooner Bar) for passengers to sign and share their favorite memories and their histories with Royal Caribbean. Page after page was filled with names and stories, including a few from passengers who once worked for the line.