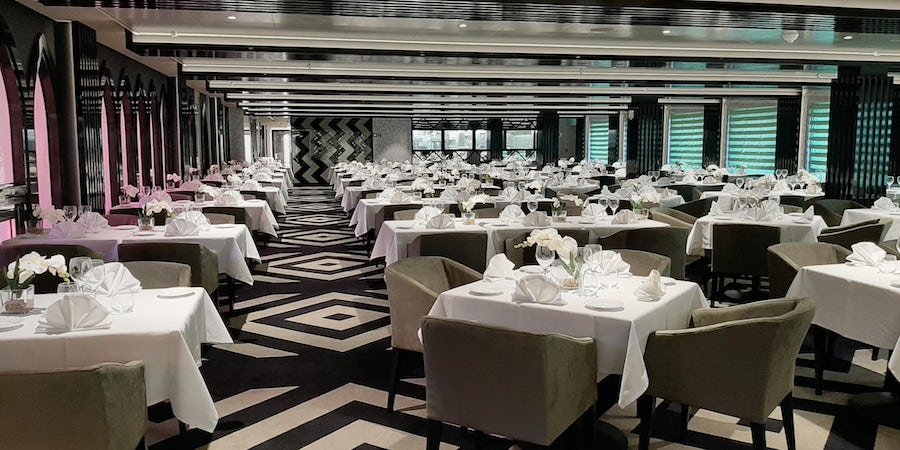 (10:00 a.m. EST) The latest addition to the rapidly growing MSC Cruises’ fleet, MSC Grandiosa, is the line’s first Meraviglia Plus Class vessel and the largest in the fleet. Carrying 6,297 passengers, the 181,000-tonne ship is 16 metres longer than MSC's Meraviglia Class ships and has 200 more cabins, plus space to pack in more facilities including a longer indoor promenade with more shops and dining options.

After MSC Grandiosa was officially handed over to the line at Chantiers de l'Atlantique shipyard in Saint-Nazaire, France, last week, we were among the first to get onboard -- joining the ship as it set off to Hamburg for its christening and inaugural season sailing on seven-night Western Mediterranean itineraries.

Here are our first impressions of MSC Grandiosa.

Zoe, the very first virtual personal cruise assistant, was launched on MSC Bellissima and speaks seven different languages. We found her a little tongue-tied in the early days of Bellissima, but she has come on in leaps and bounds on MSC Grandiosa. The voice-enabled assistant is in every cabin, and this time around "she" was able to answer far more questions about life onboard, restaurant reservations, entertainment and services.

What impressed us the most is the new way to operate lifts where you select the floor you want on a touchpad. An overhead light indicates the next available lift and once you are inside there are no buttons for different decks -- slightly odd at first, but you soon get used to it. Plus, for people that worry about such things, it's more hygienic, too.

MSC Grandiosa has 12 restaurants and a standout venue is L'Atelier Bistrot, which first debuted on MSC Bellissima in March 2019. More than double the size of the original venue, the area on MSC Grandiosa includes a large lounge, with an area for live music, and an extended bar. It really captures the chic atmosphere of a Parisian cafe, down to the waiters in long white aprons and waistcoats with watch chains, and a drinks list with French classics such as pastis and absinthe. However, vegetarians will struggle as there isn't one plant-based option on the menu (a tad disappointing), but staff were happy to rustle up a salade nicoise minus the tuna and anchovies, along with a pasta dish for main course.

A brand-new restaurant is the attractive Il Campo, with a Spanish-themed decor, on the upper level of the Promenade on Deck 7. Serving the same menu as the main dining room, it has an intimate and upmarket vibe and is primarily set aside for Aurea Experience passengers who can reserve assigned seating in the restaurant (as opposed to eating in one of the larger main dining rooms). It is also available to other passengers during a cruise, subject to availability and on a first-come first-served basis.

Pretty as a Picture

Art has become a big thing on cruise ships in recent years, and MSC is the latest to become a floating gallery. Most notably is the "Degas Danse Dessin" exhibit in the L'Atelier which displays 26 drawings by famous French impressionist Edgar Degas, complemented by touch screens with specially created content highlighting elements of the pieces, quotes from the artist.

Elsewhere, the cabin corridors -- which can often be very dull -- have been brightened up with a collection of paintings commissioned by MSC and featuring ships in a variety of surreal settings that appear to have been influenced by Spanish painter Salvador Dali.

More Space to Shop (and Flop)

The increased length of MSC Grandiosa is most evident in the Promenade, the main indoor thoroughfare lined with shops, bars and eateries and topped off by a spectacular 93-metre "digital sky" LED screen, the largest anywhere at sea. Images are projected onto the ceiling 24 hours a day, along with special shows of changing pictures screened three times a day.

We adore this space, which is the vibrant heart of the ship. With more space there are more brands, too, including big-brands such as Beats, Sony, Apple and Bose, while fashionistas can check out Bally and Salvatore Ferragamo for the first time.

Another new addition to the Promenade is the MSC Foundation shop, offering a selection of souvenir and gift items linked to the newly launched organisation for sea protection. The foundation works with partners -- including UNICEF, the Andrea Bocelli Foundation and Mercy Ships -- and, together with a panel of conservation experts, is working towards restoring coral beds around the line's recently opened private island, Ocean Cay MSC Marine Reserve in the Bahamas. It's interesting to get a first-hand insight into the various projects and know that profits from items purchased are going to a good cause.

Although we didn’t get to see them on our sailing, MSC Grandiosa is premiering two brand-new Cirque du Soleil at Sea shows -- "Cosmos - Journey to the Unbelievable" and "Exentricks" that will be performed in the Carousel Lounge, which took six months to build, and hosts just over 400 passengers per performance.

Passengers can look forward to some tweaks to Grandiosa’s Carousel Lounge, including the addition of 80 LED spheres to create a large array of visual effects, moving LED lights and a lift in the centre of the 360° rotating stage to bring more focus onto different acts.

Grandiosa certainly lives up to its name, the ship shares the same DNA as its smaller, older sisters, but amped up to 11: more entertainment, more dining, more bars, more shopping and even more fun.