You may also like
Dismiss
2019 Atlantic Hurricane Season Outlook: What Cruisers Need to Know
Coronavirus: Updated Cruise Ship Policies and Cancellations Because of COVID-19 (2021)
Hurtigruten Ramps Up Return to Cruising With Most of the Fleet in Service by September
Tom Cruise Hires Two Hurtigruten Ships to House Cast And Crew of Mission: Impossible 7
Live From MSC Cruises' MSC Grandiosa: What's it Like Sailing on a Big Ship in the COVID Era?
Royal Caribbean's Odyssey of The Seas Cruise Ship Officially Christened
These Ships Are Coming Back To The U.S. in 2022: Here’s Why You Should Care
Are Cruise Lines Increasing Gratuities in 2023?
Royal Caribbean Showcases New Icon of the Seas Cruise Ship with 'Making an Icon' Video Series
Just Back From Allure of The Seas' Maiden Galveston Sailing: Hits and Misses 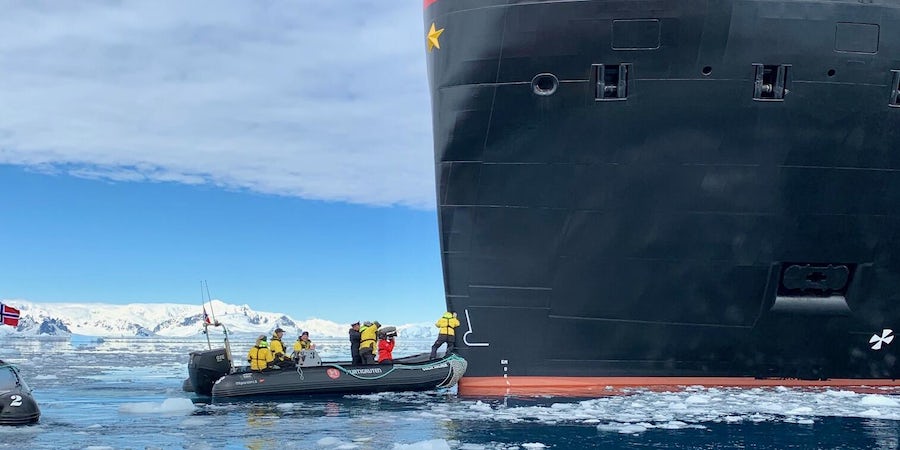 At a ceremony in Chiriguano Bay on Brabant Island, the line's new hybrid-electric-powered expedition vessel was named by polar pioneer and godmother Karin Strand, capping off the event, which honored the legacy of Norwegian polar explorer Roald Amundsen.

Passengers watched from tenders afloat nearby, and a group of penguins swam by to entertain them as they waited. Sister vessel Midnatsol was also present for the event.

Instead of the traditional bottle of Champagne, a chunk of Antarctic ice was smashed against the bow of the ship to commemeorate the occasion. Speeches were given from a tender, which then transported Strand right up to the ship's hull, where she proudly gave it a kiss.

"I am truly honored to share in such a historical moment as this, with like-minded explorers and colleagues, all dedicated to navigating our oceans in a more sustainable way," Strand said.

"We could not think of a better location than Antarctica to name MS Roald Amundsen," said Daniel Skjeldam, chief executive officer of Hurtigruten. "I believe Roald Amundsen would be proud. With the ship carrying his name and legacy, Hurtigruten is redefining boundaries, challenging the industry, and continuing to push toward greener and more sustainable operations. As Roald Amundsen was the symbol of a new era of exploration, this ship is the symbol of a new era in the cruise industry."

Amundsen was one of the key members of the Heroic Age of Antarctic Exploration. He became the first to successfully traverse the Northwest Passage, beat Englishman Robert Falcon Scott to the South Pole in 1911 and led the first expedition proven to have reached the North Pole in 1926. He disappeared in the Arctic in 1928 while taking part in a rescue mission for a downed airship.

To commemorate the christening of the explorer's namesake vessel and Hurtigruten's new flagship, a donation has been made to the Hurtigruten Foundation to support conservation efforts in the 200 destinations to which the company's fleet sails.

Since its debut this summer, Hurtigruten's Roald Amundsen became the first cruise ship in history to sail on battery power and was the first hybrid-electric ship to transit the legendary Northwest Passage. The vessel utilizes special battery packs to support its low-emission engines, which Hurtigruten says reduce CO2 emissions by 20 percent.

Roald Amundsen will head to Alaska in 2020 after its inaugural Antarctic season and will be joined by sister ship Fridtjof Nansen in 2020.