You may also like
Dismiss
2019 Atlantic Hurricane Season Outlook: What Cruisers Need to Know
Coronavirus: Updated Cruise Ship Policies and Cancellations Because of COVID-19 (2021)
P&O Cruises Restarts Cruising For First Time in 15 Months on Britannia
Royal Caribbean's Odyssey of The Seas Cruise Ship Officially Christened
NCL Reveals More Dining, Design Details on New Cruise Ships Norwegian Prima and Norwegian Viva
These Ships Are Coming Back To The U.S. in 2022: Here’s Why You Should Care
Are Cruise Lines Increasing Gratuities in 2023?
Royal Caribbean Showcases New Icon of the Seas Cruise Ship with 'Making an Icon' Video Series 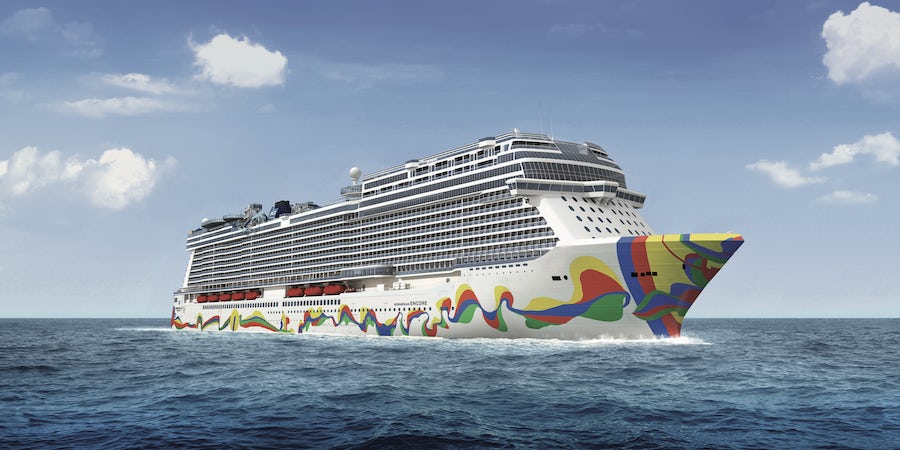 (10:33 a.m. EST) Norwegian Encore marks the end of an era for Norwegian Cruise Line. The 4,000-passenger ship is the last of the line's Breakaway Plus-class ships, Norwegian's most successful class of ship in terms of passenger scores and profitability.

Norwegian's next new ship, the first in the Leonardo Class, will be radically different and significantly smaller at just 3,000 passengers. It launches in 2021.

Encore shares the same essential DNA as its fleetmates Norwegian Bliss and Norwegian Joy (less so with Norwegian Escape), but with a few tweaks, including a new-to-Norwegian restaurant, Onda by Scarpetta and new production shows including the Broadway hit, Kinky Boots.

Like its newer fleetmates, the ship is big, bold and unapologetically fun, with a vast array of bars, nightclubs, restaurants, water slides, a go kart track, laser tag and a virtual reality gaming pavilion.

But also, like its sister ships, it boasts the Observation Lounge, a huge space at the top and the front of the ship that is the most serene and elegant area we have come across on a ship not targeted at the luxury market.

So does Norwegian Encore do the line's most popular class of ship justice? Is it an appropriate end of an era?

We got onboard a short cruise from Bremerhaven, Germany to Southampton, England, to find out.

Here are a few of the features we thought stood out the most.

The standout production show on Norwegian Encore is Choir of Man (also available on Norwegian Escape). An eight-strong cast of guys -- short guys, tall guys, slim guys, fat guys, guys with beards, guys with tats (take your pick) -- dance, play instruments, hurl themselves into the air, jump on tables, over bars -- and sing their hearts out.

The action takes place in an Irish pub, over the course of 45 minutes. But it's not a play -- there's no plot -- it's all performance. There's a narrator who introduces us to each man, what their story is, who they are, their loves, their dreams -- and each of them take a turn in the spotlight, singing or dancing.

It looks and feels chaotic, but you can tell these guys have rehearsed this into seamlessness; not a duff note, not a single false move, just pure joyous entertainment from start to finish. The audience -- led by us -- were on their feet at the end, clapping, whooping and wanting to be on stage with them.

(Top tip: Come early and have a pint on stage, or stay a few minutes later and you can do the same).

We've been hearing about this high-end Italian restaurant for so long, our expectations were high, and we weren't disappointed. (We weren't the only ones who enjoyed the food there, all the top Norwegian execs, including incoming CEO Harry Sommer, chose to eat there every night.)

Onda has a classy feel in gold and silver, and there's little in the way of decor, presumably so as not to distract you from what's on your plate

The menu is deceptively small; rather than individual listings, dishes are all grouped under the Italian headings of "antipasti," pasta, primo, secondi and dessert. (There's even pizzas if that's what you're craving.)

Dishes are available a la carte and if you're not paying attention when placing your order, you'll be looking at a check somewhere north of a couple of hundred bucks, so be warned. Thankfully, the portions are large and filling, so by the time you get to your main (secondi), you may end up not being able to finish it. But don't forget desserts; all the options are outstanding.

Standout dishes for us were the short ribs and the creamy polenta and the pasta, especially the scialatieli, shrimp, clam, mussels, white wine garlic sauce; and the Scarpetta's signature spaghetti, which is just pasta, tomato and basil, yet absolutely delicious, with a richness of taste and texture we haven't tasted before.

We've said it before, but we'll say it again -- this 20,000-square foot space, also found on Norwegian Bliss and Norwegian Joy, is one of the most soothing and relaxing spots on any large ship we've ever been on. We found ourselves returning here again and again, at all times of day and night. It's a perfect spot for breakfast (if you’re happy to skip hot items) with a Continental selection served either side, as well as at the front. Translation: you can avoid the mayhem of the buffet just one floor above, for a chaise lounge, a quiet space and a perfect view.

Night is similarly as peaceful; you won't find live music, a dance floor or any distraction, save a small bar, the tinkling of glasses and muted conversation.

The Observation Lounge looks and feels luxurious; it's elegant and understated, and feels like it should be open to just the lucky few. Yet it's open to everyone, and we applaud Norwegian for that, especially when there are so many other spots onboard where you have to pay extra. (There is a smaller, suites-only version of the Observation Lounge higher up on the ship.)

Not sure what to think of a Broadway musical, with songs by Cyndi Lauper, about a man hoping to turn his struggling shoe manufacturing plant in England into a success by putting out high-heeled boots for drag queens?

Let us tell you. It works. Despite running a half an hour shorter than the original Broadway production (it's still nearly two hours with no break) it includes the same number of songs and is absolutely worth seeing.

We loved its exuberance and its message -- accept people for who they are -- and believe it's a fine addition to Norwegian's already outstanding repertoire of straight-from-Broadway shows.

There are a lot of fun experiences available in this 10,000 square foot virtual reality arcade packed full of cool games. We particularly loved the Jurassic Park jeep drive and the roller coaster, the latter of which was so realistic that people came off several shades greyer than when they got on.

There is also a simulated hang-gliding experience (do not to eat or drink before this if you're at all motion sensitive!); a simulated racetrack where you can compete against your friends; a 4D cinema where you and your friends can shoot zombies (and compare scores afterwards); and a VR walk-through space where you shoot rabid rabbits, which is a lot of fun for kids.

Just one word of warning: these games are highly addictive and you (and your kids) could find yourself in here for hours on end -- spending a lot of money.

It rained during our entire sailing, but it's a bigger go-kart track than you'll find on Bliss or Joy and part of it goes over the side of the ship. What's not to like?