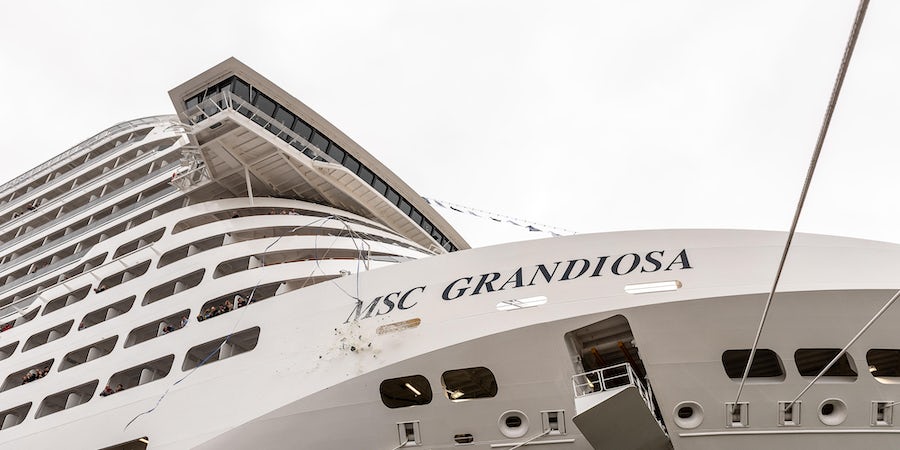 (5:35 p.m. GMT) -- MSC Cruises has taken delivery of MSC Grandiosa, the first in the line's Meraviglia Plus Class ships and billed as the one of the most environmentally-advanced ships at sea.

The official handover of the 17th ship in the MSC fleet took place at the Chantiers de l'Atlantique shipyard in Saint-Nazaire, France, following a steel-cutting ceremony to mark the start of construction for the line’s first World Class vessels, MSC Europa, earlier in the day.

The 6,297-passengers MSC Grandiosa is 16 metres longer than MSC's Meraviglia Class vessels and has 200 more cabins. Features include an extended indoor promenade with increased dining options and two all-new Cirque du Soleil at Sea shows -- "Cosmos - Journey to the Unbelievable" and "Exentricks".

Pierfrancesco Vago, MSC Cruises' Executive Chairman, said: "MSC Cruises has, since its inception, embraced a commitment to environmental stewardship and ways to minimise and continuously reduce our environmental footprint both at sea and ashore with the use of innovative, leading-edge and effective technologies across our entire fleet."

MSC Grandiosa is the first of three Meraviglia-Plus ships to join the fleet and will be followed in 2020 by MSC Virtuosa and the LNG-powered World Class MSC Europa in 2022.

It is the line's fifth new ship to enter into service in the past 30 months and is part of the company's plan to build a total of 13 environmentally-sound cruise ships between 2017 and 2027, plus an additional four to operate under a yet-to-be named luxury cruise brand.

The ship will be christened in Hamburg on November 9 before beginning seven-night cruises in the Western Mediterranean with six embarkation ports and calls, including Genoa and Civitavecchia (Rome), Italy; Palermo, Sicily; Valetta, Malta; Barcelona, Spain; and Marseille, France.