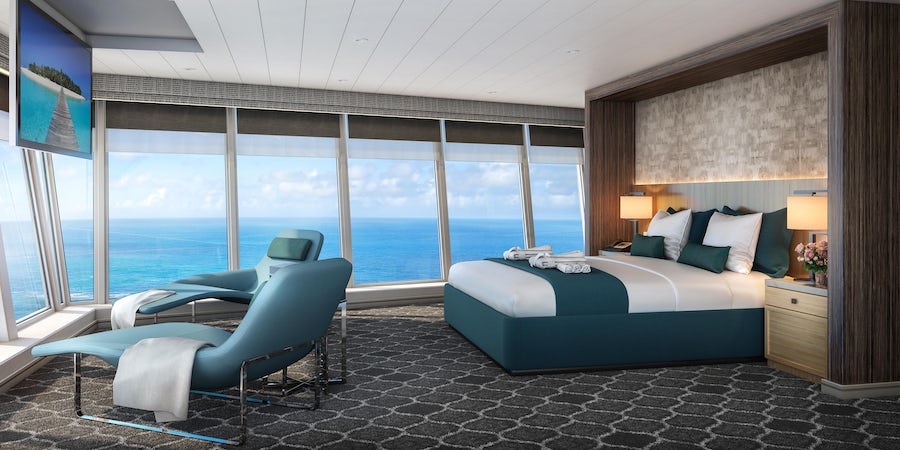 (9:30 a.m. EDT ) -- When Oasis of the Seas returns from its colossal dry dock refurbishment November 24, it is set to debut a brand-new-to-Royal Caribbean cabin category -- the Ultimate Panoramic Suite.

As Cruise Critic revealed earlier this week during a first look at the ship's $165 million refit in Cadiz, Spain, the two new suites are located above the bridge, with sweeping 200-degree panoramic views.

The suites will accommodate up to four passengers and feature a master bedroom with a separate bathroom, a walk-in closet and dressing room area, and a living area with a half bath. The suites' most striking feature will be their wall-to-wall and floor-to-ceiling glass windows.

Ultimate Panoramic Suites are part of Royal Caribbean's Royal Suite Class (they're Star Class), which means passengers get access to the suite lounge, their own Royal Genie, free Voom Wi-Fi and specialty dining.

A total of 57 new cabins are being retrofitted to Oasis of the Seas as part of Royal's "Amplification" project -- the largest refurbishment ever undertaken by the cruise line.

Oasis of the Seas will return to service with a seven-night Eastern Caribbean voyage that departs Miami on November 24.