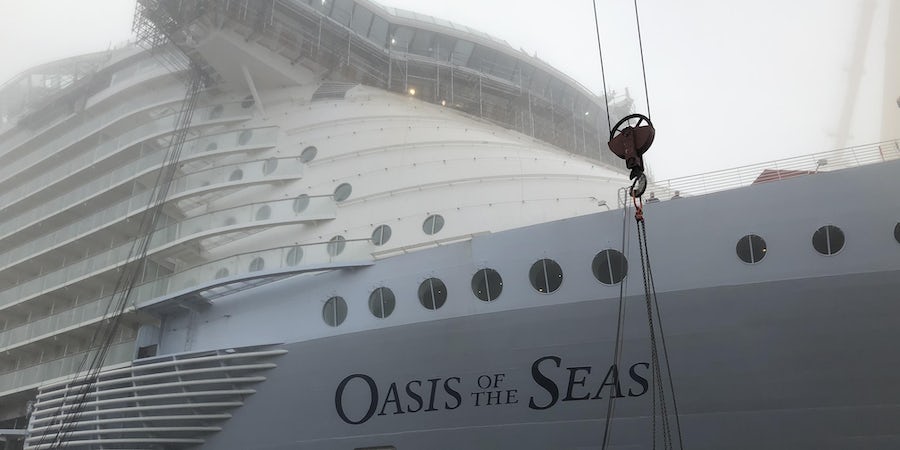 (4:00 p.m. EDT) – Royal Caribbean's much loved Oasis of the Seas will gain 800 tons by the end of its current refurbishment thanks to 57 new cabins -- including two new-to-the-line suites -- and a host of new features including bars, waterslides, an escape room and the line's signature 10-deck dry slide, the Ultimate Abyss.

Royal Caribbean took delivery of the ship -- which proved a game-changer for the industry -- 10 years ago yesterday (October 28).

The 5,200-passenger megaship is almost six weeks into a nine-week dry dock at the Navantia shipyard in Cadiz, Spain -- the biggest refurbishment ever undertaken by a cruise line. The work is part of Royal's ongoing "Amplification" project, which has seen the rollout of a mix of new spaces, along with many of the most popular features from the line's most recent ships being retrofitted onto older vessels.

Highlights include: the Ultimate Abyss, an escape room experience that recreates a Mission Control-type space circa 1973; the Lime & Coconut Bar; a Spotlight Karaoke, which includes two private karaoke booths for hire; Playmakers Sports Bar & Arcade; the Perfect Storm water slides, along with the kids-focused Splashaway Bay; and the Bionic Bar.

The works also include significant environmental improvements, including the installation of scrubbers to improve emissions as part of its Advance Emissions Project, and a repainted hull, helping it glide through the sea with less drag.

"This is the biggest cruise ship refurbishment we have ever undertaken," said Kevin Thorogood, a Royal Caribbean hotel director involved in overseeing the refurbishment, at an exclusive hard-hat tour for select media. "We topped out at 2,850 contractors plus we had 2,300 crew, that's over 5,000 people onboard for the majority of the project.

"We just dropped below 5,000 in the last two days, but in the past five and a half weeks we've had more than 5,000 people working on Oasis… It's unprecedented in the industry."

Oasis of the Seas returns to service on November 21 in Fort Lauderdale, just in time for Thanksgiving.  Sister ship Allure of the Seas will receive a similar bow-to-stern refurb when it goes into dry dock next year.

As well as becoming the largest ship in the world when it debuted, Oasis of the Seas was also the first ship to have sections of the inside carved out to create inside cabins with balconies and open-air interior spaces.

The fifth Oasis-class vessel to launch will be Wonder of the Seas, debuting in 2021 and going straight to Asia.