You may also like
Dismiss
The Best – and Worst – Cruise Experiences of 2018
Turner Classic Movies Cruise Returns in 2020 With Movie Stars, Screenings and More
The Jane McDonald Interview: On Cruising, Touring and What Ship She'd Like to Sail on Next
Movie Madness: Ben Mankiewicz Says What to Expect on 2019 TCM Cruise
Live From Dream Cruises' Explorer Dream: First Impressions
Just Back from the TCM Cruise: Diane Ladd Is Cruising's Newest Convert
Return To The Sea: Cruise Line Executives Share Memories -- and What They're Looking Forward To
Best-Selling Authors To Host Avalon Waterways' Storyteller River Cruises in 2021 and 2022
Disney Wish to Feature First Disney Attraction at Sea, New Restaurants 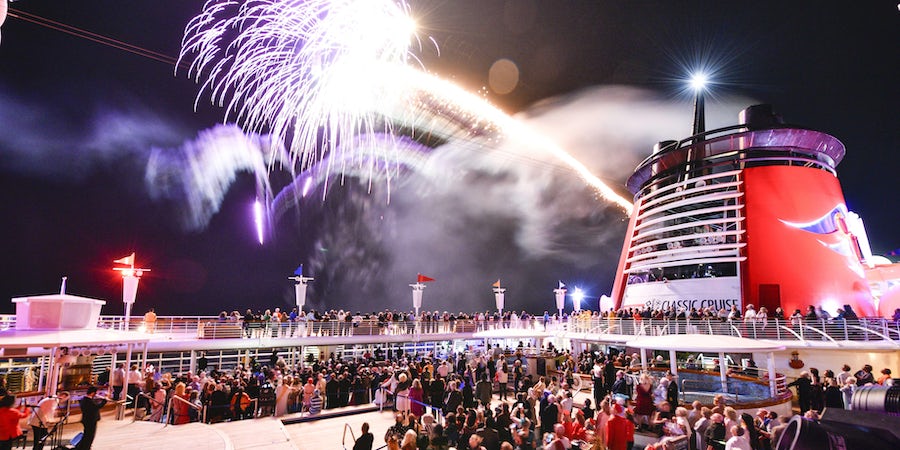 (1 p.m. EDT) -- For some, the thought of going on a cruise to Bermuda for the express purpose of watching movies may sound odd. For fans of the Turner Classic Movie (TCM) Cruise, movies from breakfast to midnight and celebrity interviews with the silvering stars of the silver screen make for a dream vacation that they flock to again and again. We boarded Disney Magic for the seventh annual TCM Cruise to discover why fans of classic films love this theme cruise so much (and why you might, too). Here's what we learned.

You can indulge your passion for spending all day and all night watching movies on the TCM Cruise, with multiple films being screened simultaneously around the ship. TCM programmer Scott McGee curates the shipboard movies, a mix of dramas like "Dodsworth," comedies like "Roman Holiday," horror flicks like "The House on Haunted Hill" and movies starring the invited celebrities.

Rita Schmidt Sudman, a retired broadcaster from San Diego, loves that the 1,750-passenger Disney Magic is "small enough to get around easily and big enough" that there are four movie venues screening different films at the same time, "meaning there's always something I want to see." This is Sudman's third TCM cruise with her sister.

TCM brings on movie stars from Hollywood's golden age to introduce their films and share deep dish about their careers in movies, television and theater. This year's cruise includes actresses Cicely Tyson, Mitzi Gaynor and Diane Ladd. Each of them spoke about the difficulties of being a woman in the industry and talked about the stories behind  their most celebrated films.

"Seeing the stars and relating to them personally" is the favorite part of the cruise for Karen Saunders, of Carlsbad, CA, a retired marriage counselor and onetime dancer. For her, the interview sessions with singer/dancer Mitzi Gaynor were a revelation, especially that the actress gives her moral and financial support to young dancers who, like athletes, have relatively short professional careers.

"Not only did Cicely Tyson change my life, she deepened my pride," says Estelle Whiting, who as an African-American was thrilled that a woman who looked like her was onscreen in a classic film. Prior to the screening of her 1972 film "Sounder," Cicely Tyson spoke about the difficulties of being an African-American actress getting hired in Hollywood in the '70s and the challenges of getting the movie -- a Depression-era film about sharecroppers in the South -- off the ground.

Hiting and bestie Belinda Gillis are on their fourth TCM cruise (in fact, 70 percent of passengers are repeat TCM cruisers). The pair from Brooklyn are self-described "TCM diehards" who have attended nine TCM Film Festivals in Hollywood, as well.

Cruise passengers debated whether "The Godfather, PartII" or "Sounder" was the best film they saw onboard. But just about everyone agreed that meeting and watching the TCM hosts in person was the cruise highlight.

Since the death of Robert Osborne, TCM's founding host, in 2017, Dave Karger, Alicia Malone and Jacqueline Stewart have joined Ben Mankiewicz, prime-time host, and Eddie Muller, the "Czar of Noir," in introducing movies on-air. All but Stewart, the newly hired host of "Silent Sundays," are onboard, and passengers behave like fanboys and fangirls whenever they appear. These small-screen stars are as sought after as the big-screen celebrities onboard by the TCM devotees who watch them weekly from their homes across the U.S.

Throughout the cruise, the hosts introduce films, conduct interviews and take part in late-night movie trivia contests and Bingo. A sidesplitting "100 Questions" event had the TCM Hosts fessing up to their most embarrassing experiences. It was like watching a sister and three brothers engage in a benign form of sibling rivalry, hilarious as a night at a comedy cabaret.

"Where else can you watch a big-screen movie while relaxing in a hot tub?" asks Darrell Clark of Monrovia, CA. He and his wife, Janet, were up to their necks in hot water (in the best possible way) when I spoke to them, having just watched "House on Haunted Hill" while enjoying the tub poolside on Disney Magic. This is their fourth TCM cruise.

"We love this ship," says the blissed-out Janet. "And not only because it has the best facilities of any cruise ship we've ever been on." Disney Magic offers many hot tubs, two pools and two water slides, including the impressive "Twist and Shout" chute. Its expansive facilities means that for couples where one spouse isn't as movie-crazed, that person can enjoy a spa day or some poolside R&R while their significant other attends the film screenings.

5. Halloween and Other Shipboard Events

The TCM Cruise is not only about watching movies in darkened theaters. Passengers are equally passionate in participating in all the shipboard activities. For example, "All Hallow's Eve" began with a parade of passengers in costume as their favorite movie characters, continued with a best-costume pageant and culminated with major fireworks on the upper deck. There were Cruella DeVilles and Invisible Men. There were a handful of Princess Leias and a yellow-slickered trio from "Singin' in the Rain."

Fun couples included Cleopatra vamping Caesar, King Kong escorting Marilyn Monroe, and the Tom Hanks coach character from "A League of Their Own" accompanying a Geena Davis wannabe outfitted in a Rockford Peach uniform. All this, and TCM stylist Holly Hadesty dressed up as Ben Mankiewicz.

On other evenings, there is live music on every deck and in every lounge, best of all the Django Reinhardt-style quartet The Holly Street Stompers. Their 1930s-style music perfectly complements the classic movie atmosphere onboard. It is as delightful to see Mitzi Gaynor dancing in "South Pacific" as to see passengers dancing with significant others and new friends.

6. The Friendships and Shared Passion for Film

But perhaps more than anything, TCM cruisers return again and again to this themed sailing because of the people they meet and the friendships they make. "I love that the 1700 guests all have something in common -- a love of movies," says Sudman. "It makes it easy to strike up a conversation with anyone."

The TCM Cruise organizers facilitate socializing by encouraging solo travelers and duos to join group tables at meals. They also pass out TCM profiles, asking about favorite actors and movies, and passengers post their answers on their cabin doors.

"We love coming back again and again because it's family," says Gillis. "We're able to discuss actors and actresses with everyone." Indeed, new families are actually made onboard, as we watched a TCM Cruise regular propose to his girlfriend during the opening meet-and-greet with TCM host Ben Mankiewicz.

I sat with friends Whiting and Gillis for TCM host Dave Karger's interview with Cicely Tyson, and we agreed that watching a movie or talk with friends -- and being able to laugh and whisper with them, and discuss what we watched afterward -- is much more fun and meaningful than watching alone.

Leonard Maltin, a first-timer like me, gets the last word: "I re-learned on the cruise what I had already experienced at the TCM Film Festival: That TCM fans are passionate and devoted in a way I don't think any channel or brand can compete with."

"At a time when there's no history on The History Channel, no arts on the A & E channel, and no movies on AMC (American Movie Classics), it's exhilarating that TCM is so committed to its original mission."

The 2020 Turner Classic Movie cruise sets sail aboard the larger, 2,500-passenger Disney Fantasy from October 4 to 10, 2020. It will travel from Fort Lauderdale to Cozumel, Grand Cayman and Castaway Cay (Disney's private island).