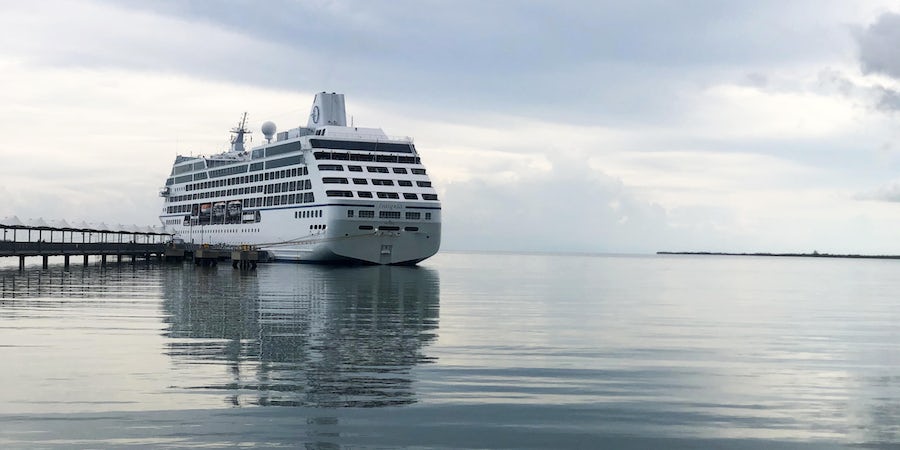 Live From Oceania Insignia: Why A Western Caribbean Cruise Can Be A Perfect Spa Vacation

When it comes to girlfriends getaways, there are lots of choices out there: Spas, city trips and active adventures all come to mind. But after a week on Oceania Cruises’ Insignia, we’re ready to put small ship cruising up against any of them, in terms of relaxation and wellness.

While almost any cruise can be turned into a self-care sanctuary, we’re finding that a Western Caribbean itinerary on a small ship – Insignia only has 684 passengers – lends itself nicely to a spa-style regimen. Read on for our reasons why.

Earlier this year, Oceania (and sister company Regent Seven Seas) introduced plant-based menus on all ships. We’re here to report that the vegan additions are creative, flavorful and continue Oceania’s reputation as having some of the best dining at sea.

The secret is that the line invested in research, with Oceania’s executive chef Franck Garanger and Bernhard Klotz, vice president of culinary operations, flying to Thailand to spend time with experts in plant-based cuisine. The goal was to develop a variety of menu items that could be placed in all of the restaurants on the ship, at every meal.

And so they have. Standout dishes we’ve tried include a Yucatan black bean burger with a charcoal bun that stood out for its complex seasoning and spice; a coconut milk carrot cake and an outstanding pad Thai. The menus in the Terrace Cafe buffet and the Grand Dining Room are all marked to indicate plant-based cuisine, and you can even order an entire plant-based meal at the two specialty restaurants, Toscana and Polo Grill. The fact that plant-based cuisine is not only embraced but elevated makes eating healthy extremely easy onboard.

It’s not a wellness getaway without some time in the spa. For now, Insignia has Canyon Ranch onboard, which specializes in decadent lotions and to-die-for massages. We had a deep tissue massage that made our hips feel like new again. And we love feeling like a VIP in the small Spa Terrace space at the front of the ship, accessible because of our Concierge-level cabin.

Oceania has changes planned for its spa; Aquamer Spa & Vitality Center, which appears first on Riviera on December 5, will be the name of its new brand. While the outside contractor is One Spa World – known to veteran cruisers as the new name for behemoth spa company Steiner – we’re told that Aquamer will not be the same as that company’s other cruise ship outposts.

The change in provider means that Oceania will have more control over the treatments, and offer more options than just massages and facials. We’ve heard good ideas such as wellness shore excursions and spa treatments that are themed to different destinations where the ship is. (We would have loved to see a Mayan treatment here in Belize and Mexico, for example.) Men’s wellness services are going to be added. Prices, which are sky high in the current Canyon Ranch spa – 50-minute massages start at \$155 – might be lowered in some cases.

While we’re sad about the loss of luscious Canyon Ranch products, we like the idea of more spa treatment diversity. One promise we’re going to hold Oceania to: We were told that upsells and product pushing would not be allowed in new Aquamer. We hope so; as delightful as our Canyon Ranch practitioner was, she was heavy on both. Who needs that, when you’re emerging from a relaxing treatment?

The third crucial factor in any spa vacation, beyond treatments and healthy cuisine, is the ability to stay active. This is where a Western Caribbean itinerary really shines. We’ve bicycled in Key West, snorkeled on the reef in Roatan, Honduras; and kayaked in Costa Maya, Mexico. It’s far more exercise than we normally get at home – and much more fun than going to the gym.

Originally, Insignia was supposed to go to Cuba during the fall. When the Trump administration put the kibosh on Cuba cruising, the line switched the itineraries to the Western Caribbean and offered some significant discounts. The tactic worked: our cruise is almost full, with a substantial number of passengers who are new to Oceania. The influx of new-to-the-line people has brought down the onboard demographic slightly – on most Oceania cruises, the average age is 64 – and kept the fitness center busy in the mornings.

One mantra we’ve heard from some Oceania insiders is that today’s 60- and 70-year-olds look nothing like those of a generation ago; they are far more active and youthful in their habits. The line is continually on the hunt to find new ways to add programming and excursions to fulfill this need to move.

If you really want to feel special, try stopping Harvest Caye in Belize on a small ship. The private port development was built to accommodate sister brand Norwegian Cruise Line’s  much larger ships – and so when you’re there with Oceania, you have the entire place to yourself.

You might use this spot to continue an active vacation, as zip lining, peddle boats and kayaking are available. But our favorite spa-like indulgence here is

to rent a beach villa. Not only do you get the perks of private beach access, butler service, free Wi-Fi and air conditioning, but the beach villas also provide a surprising value, particularly if you have a group. The villas are quiet and far from the pool area ,which, while expansive and gorgeous, can be very loud because of the party music blasting from the speakers.

A small ship doesn’t have a ton of entertainment or late-night partying. The shows that we have seen tend to be simple musical revues of Broadway show tunes or popular music, executed by a lovely team of singers and dancers, but nothing that you’ll kick yourself for missing. Which is why we’ve found ourselves going to bed on the early side, ensuring that we receive a full eight hours a night (for women constantly on the go, that type of rest is almost unheard of).

That isn’t to say that we’ve avoided alcohol altogether; it’s not a girlfriends getaway without a little wine time. But Oceania includes all non-alcoholic drinks in the fare, so more often than not, a yummy mocktail fulfilled our fruity drink needs. Glass carafes of Vero water, both still and sparkling, are replenished daily. A lovely self-serve espresso machine in Horizons lounge provides a daily cappuccino boost, just in time for afternoon trivia sessions.

All this wellness focus means that we’ll be re-entering the real world after our cruise with brighter skin – and brighter spirits. If that’s not the hallmark of a true spa vacation, we’re not sure what is.