You may also like
Dismiss
Just Back From Avalon Waterways: A River Cruise in Vietnam and Cambodia
The Best – and Worst – Cruise Experiences of 2018
Summer Cruise Deals 2019
The Edge Evolution: Just Back From Celebrity Cruises' New (and Improved) Celebrity Edge
Tahiti, Croatia, Cambodia & More: The Newest Cruise Ship Itineraries
The Best – And Worst – Cruise Experiences of 2019
Viking to Debut New River Cruise Ship on the Mekong
Pandaw Ceases Operations; River Cruise Line Specialized in Southeast Asia
Emerald Cruises Officially Launches in Australia
River Cruise Bookings Up Overall Despite Ukraine Conflict, Danube Has Seen A Slow Down 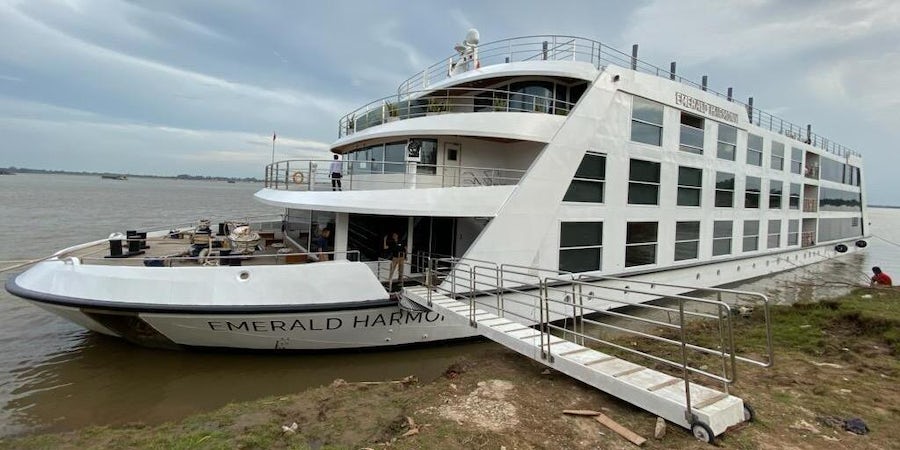 The 84-passenger vessel is ideal for the quickly evolving and increasingly popular Southeast Asia market, as it's small enough to go places most other ships in the area can't. Our seven-night itinerary, which began in Siem Reap, will conclude in Ho Chi Minh City (Saigon) -- a port inaccessible to most ships due to low bridges and power lines.

Here are five things we think you should know about Emerald Harmony.

Emerald Harmony is sleek and modern with an exterior more like that of a private yacht than a river ship. It also boasts features -- a self-service laundry room, two spa treatment rooms, a salon, a fitness room with machines and free weights, and a wake-facing outdoor pool not located on the top deck -- which are rarely found on river ships.

The area's hot, humid climate means we've been changing our sweaty clothes at least twice a day, especially after excursions. With so many dirty clothes piling up, the laundry room is a godsend. And, although we have had a decent amount of exercise ashore, running outdoors is out of the question, so the small fitness room is a welcome sight, too.

2. The food is phenomenal.

As self-proclaimed picky eaters, we were worried we would have trouble finding something we'd dare to eat on an itinerary that touts local specialties like tarantulas and crickets. Although Emerald Harmony offers those options (as part of a special Cambodian street food-themed lunch), there hasn't yet been a meal where we were unable to find several tasty and filling (and non-insect) items to try.

For super picky eaters, there's an always-available menu with standards like steak, salmon and salad; dietary restrictions are handled with aplomb when advance notice is provided.

Emerald Waterways' ships are known for having some of the most spacious ships afloat. In keeping with that reputation, Emerald Harmony's smallest cabins provide 256 square feet of space, and all but the lowest-tier accommodations have open-air balconies with windows that raise and lower with the push of a button.

Full disclosure: Part of the reason cabins are so big is because, with the exception of the highest-level suites, none have traditional balconies. However, in a region where humidity is high, average temperatures hover in the 80s and 90s, and the mosquitoes are fierce, you won't miss having one.

4. The tours are eye-opening but manageable.

Nearly every port offers at least one free, carefully selected shore tour. For those, passengers are divided into small groups, so the experiences are intimate and rarely feel overcrowded. These tours tend to focus heavily on life in Southeast Asia, showcasing both important landmarks and small villages along the river. In some ports, Emerald also features Discover More tours for an extra fee and Emerald Plus excursions that are exclusive to the line. For instance, the Emerald Plus tour we tried out had us visiting a local Vietnamese family's home for some live folk music, before touring a coconut farm and walking over a monkey bridge to try local fruits.

Excellent English-speaking guides help to bridge the gap between Eastern and Western cultures, languages, customs, foods and currencies, but they keep groups moving at a comfortable pace that's neither too fast nor too slow -- particularly important in the hot climate, where a too-long tour could quickly fatigue or dehydrate passengers. Our tour experiences were so fantastic that we wished we had tacked on one of the line's pre- or post-cruise land trips, which can extend your overall vacation by up to two weeks.

5. Attention to detail is everywhere.

From the classy, dark-wood lounges to the neutral staterooms, understated elegance is everywhere; there's nothing to overshadow the excessive attention to detail (both in terms of service and amenities, like the aforementioned self-service laundry) that shines bright on Emerald Harmony. Expect to be handed an umbrella at the gangway on days when it might rain, as well as cold towels and "welcome back" drinks upon your return.

Crewmembers will also be waiting to take your shoes for cleaning after particularly messy tours. (Don't worry. They'll give you slippers to wear back to your cabin.) Speaking of cabins, even the most basic have eight outlets, four USB ports and branded refillable water bottles you can take home as complimentary souvenirs after your vacation. (There are no plastic bottles or plastic straws available onboard.)