You may also like
Dismiss
Swan Hellenic to be Relaunched As New Expedition Cruise Line
Marella Cruises Reveals New 2021/22 Itineraries to the US, Caribbean and Asia
Photos From Paul Gauguin: Cruising Has Resumed In Tahiti
Cruising the Newest Ship Afloat: Live From Celebrity Apex
Live From Royal Caribbean's Odyssey of the Seas: Why You'll Never Be Bored on This Cruise Ship
Norwegian Breakaway Cruise Ship Returns To New York: We Chat With NCL President Harry Sommer
The Biggest Cruise Ship in the World, Wonder of the Seas, Has Arrived in Florida
A 'Thor: Love and Thunder' Cameo That Gets Cruise Fans Excited
Just Back From Allure of The Seas' Maiden Galveston Sailing: Hits and Misses 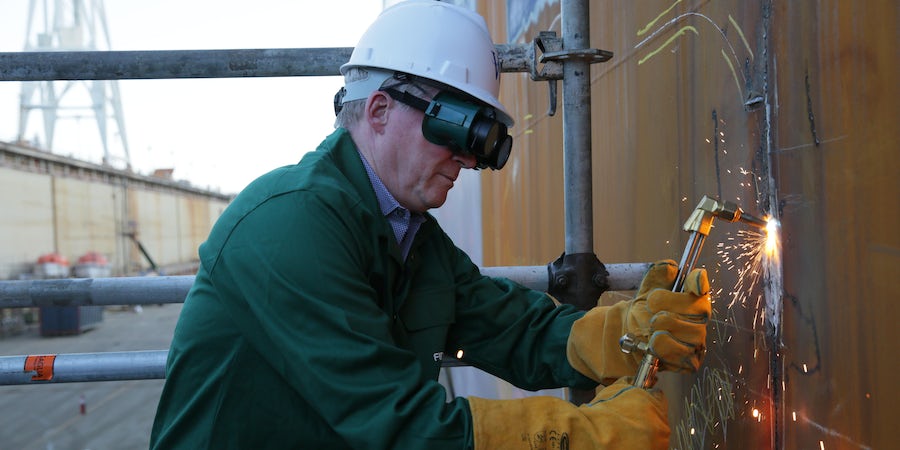 Cruise Critic is live in Palermo, where the first of three Windstar Cruises small ships, Star Breeze, has begun an innovative "stretching" refurbishment at the Fincantieri shipyard. The project, which will add 84 feet to the middle of the ship, brings the passenger count of the ships up to 312, from 212, and also adds new suites, restaurants, a new pool and more.

Cruise Critic caught up with John Delaney, president of Windstar Cruises, on Thursday as the new section was about to be inserted into Star Breeze. Here are some things that Windstar fans will be excited to learn about what's coming for the Seattle-based small ship cruise line.

Cruise Critic: We spoke last night about the different things that have happened since you took the helm (in 2016), such as increasing shore excursions, adding new ports and also adding an expedition program in Alaska. Now you have this first stretching, with two more ships -- Star Legend and Star Pride -- to follow. Is this the culmination of your tenure?

John Delaney: No, this is only the beginning. It really is. You know, these are terrific ships but if we were going continue to operate them, we needed to do some dramatic renovations. The front of the house is pretty good, but the engines were a horrible configuration. They burn too much fuel, burn the wrong kind of fuel. So this was really about an economical way to add capacity while fixing a lot of this stuff behind the scenes that people never saw that needed to be done.

We also pick up some extra speed with this stretching. For example, it's one of the reasons we're able to now go to New Zealand. It was too many sea days before. So it's opening up new places like South America for us. Honestly, this is just the beginning.

We'll continue to grow this brand. Our tagline is "180 Degrees from Ordinary" and we really live by that. We use that lens for everything that we do, from itinerary planning to tours to crazy idea like this -- stretching the ships -- to the way we pick the chefs that we're working with for our two new restaurants. So we have a lot of fun things that we haven't even gotten to that will all be Windstar 3.0.

JD: There's a lot more we can do to deliver the destinations more authentically. The tours are doing that, now that we've added 2,500 tours for sale and there's 200 new ports since I started. We're at over 350 ports that we visit now. We could be bringing on really good enrichment speakers.

All of the ships are going to have interactive TVs, so people will be able to choose movies, but we want to build a lot of destination content on there as well. That would be tied into the itinerary so people can learn about the food, the culture and the history. They can relax and have a glass of wine before dinner while learning about where they're going to visit tomorrow. I think there's a lot we can do as a small ship cruise line to deliver that better.

And then we want to add just some fun experiences We want the world's best watersports marina. People love that marina. They love enjoying it in a place like the Caribbean or the Med. So coming up with some really great new toys and fun experiences and some other enhancements. We have a long list. We're taking it slowly so we can do it the right way and do it well.

CC: We know since you started, you've been taking everything one step at a time and really delivering on your promise to those who love Windstar.

JD: The things that we're doing are really resonating with our core guests, our Yacht Club loyalty members. They are so grateful for all the new itineraries. When I first went out to visit the ships, I would talk with our Yacht Club members and they would say, "We love Windstar. We'd stay with you all the time, but we've been everywhere you go twice." So you need new itineraries and new places to go. Even if it's a place like the Med where we go every year, we can still give them new ports and new things to do.

CC: You've been focusing on the three small ships this past year. Anything coming down the pike for those who love Windstar's three sailing ships? (Wind Surf, Wind Star and Wind Spirit)

JD: We're not forgetting those ships. Wind Surf will be in dry dock a month from now and it's an almost $8 million dry dock. It's getting a beautiful, brand-new spa. We're relocating it up to one of the main decks, so we'll have much more light and nicer treatment rooms.

We're also creating a really cool suite, called the Officer's Suite. It's a hidden suite where you're literally staying next to the captain, the chief engineer and the hotel manager in crew-only space. It's a really big, beautiful, nautical suite that we're bringing to life.

Wind Spirit gets the same next year in a dry dock in Singapore. Those are fantastic little ships. We just gave Wind Star and Wind Spirit a Yacht Club (sandwich and espresso bar) last year. So we're absolutely focused on those ships, too. They are our heart and our core.

CC: For people who are really sailing aficionados, you're doing Sail Amsterdam next year, correct? (August 2020)

JD: Yes! That's every five years, and it's probably the largest collection of sailing vessels in the world that all gather in one place. And we will have the world's largest sailing ship (Wind Surf) there. It's already almost sold out. Anybody who loves sailing, that's a must do.