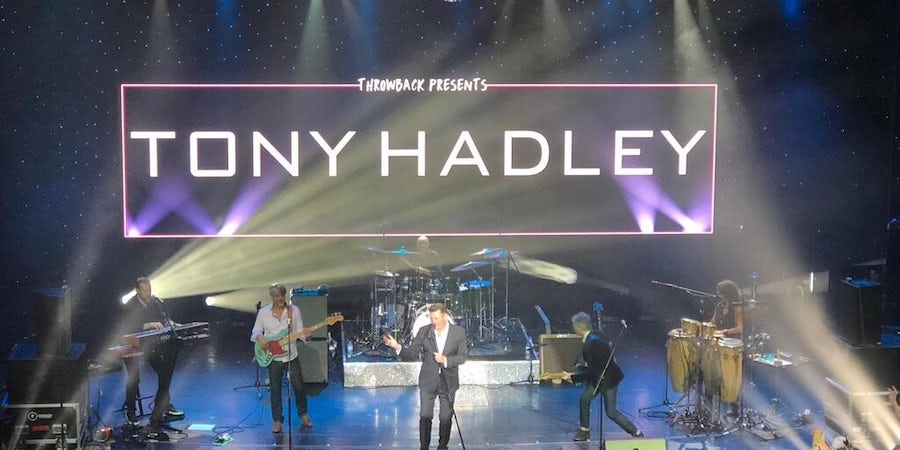 Just Back From Throwback: The 80’s Festival at Sea

"Has anyone lost a whip?," one of a group of female Indiana Jones-alikes asks the others at the end of Tony Hadley’s intimate and brilliant set, during which he knocks back Jack Daniels, enjoys some banter with the audience and even reads out a marriage proposal for a couple in the audience.

It's the Music and Film theme on day three of Throwback, the original 80's cruise, and things couldn't really get any more surreal and brilliantly bonkers.

I’ve already had Zippy and Bungle singing Hadley's classic "Gold" behind me, and on leaving the theatre, we’'e observed by a group of US state troopers, who look like they stepped straight out of George Michael’s "Outside" video.

There's a nine-foot Incredible Hulk drinking a Pina Colada at the first bar I come to. I head down to the most colourful club on the ship, and I'm suddenly being pelted by a glitter cannon on the dancefloor next to Freddie Mercury, a couple of Pink Ladies and a bloke astride an inflatable dinosaur. So far, so Throwback. So how did we get here?

Our home for the weekend is Royal Caribbean's Explorer of the Seas, and there are around 3,400 music-loving passengers on board for the floating festival of the year. We're sailing roundtrip from Southampton to Le Havre. The Palace theatre is the main venue for the headline music and comedy acts, while the ship's ice rink has been turned into Studio B to host the colourful and aptly named Club Tropicana disco (pictured above). This is decked out with space-hopper and retro sweets inflatables hanging from the ceiling, glitter cannons and an impressive light and laser set up.

With a club/live music policy, there's also a stage for bands including The 1984 and Coyote. With music and flowing drinks all day long (those packages were being made the most of), the promenade is one of the liveliest parts of the ship, and there are unexpected surprises popping up everywhere and at any time, including flash mobs, elevator karaoke and stormtroopers at breakfast. All of the ship's facilities were also available, including the FlowRider, climbing wall and spa.

The crowd are colourful, fun, friendly and very 80s indeed. It's a lively, positive atmosphere and unlike standard cruising -- more akin to glamping but without the mud. This year's theme nights (80’s Freestyle, Neon Bright and Music and Film) are respected and most people take them seriously, not just opting for cheap high street fancy dress but really going the extra mile to be creative and flamboyant.

Some of my personal highlights are the Hi-De-Hi yellow coat troop, Zippy and Bungle and a man dressed head-to-toe in a glowing neon LED bodysuit. There are YouTube videos of what to expect on the Throwback website, but they don’t really get across how much fun it is in reality. There’s lots of other things going on daily, including 80's films on your cabin TV, a TV channel and radio station, quizzes, artist Q&As and even a glitter make-up station.

Make no mistake, these people are here to party with a capital P. They dance everywhere, from the promenade to the theatre and even outside their cabins. The drinking starts early -- with Bloody Marys mandatory at breakfast. And with 80's tunes playing all day long throughout the entire ship, it’s easy to get your fix. Unsurprisingly, the demographic is mainly 40s and 50s, although there are younger revellers and also older ones too.

The majority are Brits but there are a smattering of Europeans, and I hear that many of them are first-time cruisers. They're loyal too -- a large group who met at last year’s maiden voyage held a pre-cruise party before this year’s sailing, and Floating Festivals' CEO Jonathan Blackburn tells me that they have already sold around 700 rooms for next year's cruise.

The music policy celebrates the decade that bought us legwarmers, space hoppers and shoulder pads. There's 80's tunes playing everywhere, from the Windjammer Marketplace restaurant to the stateroom corridors -- it really is a fully immersive experience. The best thing about 80's pop is that it is so diverse, with something for all musical tastes.

This year's headliners certainly prove this with the reggae-tinged UB40, next-level disco divas Sister Sledge and classy crooner Tony Hadley all going down a storm. There are two shows every night so everyone gets a seat for the intimate sets. The artists really make the effort to mix and mingle with the crowd all weekend - I lost count of how many times Tony Hadley was asked for selfies one night.

The main pool is the venue for the Sailaway party with resident DJ’s Gary Davies and Pat Sharp -- both of whom are really popular with the crowd. One of the most unexpected shows came courtesy of ex Brother Beyond singer Nathan Moore, who started off singing on stage and ended up performing in various parts of the room. That’s Throwback for you.