You may also like
Dismiss
Coronavirus: Updated Cruise Ship Policies and Cancellations Because of COVID-19 (2021)
Just Back From Hurtigruten's Finnmarken: The First Cruise Ship to Set Sail, Post-Covid
Foreign Office Revises Advice on Cruising, Rivers Now Exempt
Can a River Cruise Still be Fun in the Age of Covid-19?
7 Highlights From a Week Onboard Celebrity Apex
Live From Royal Caribbean's Odyssey of the Seas: Why You'll Never Be Bored on This Cruise Ship
Emerald Cruises Officially Launches in Australia
MSC Cruises Extends Seasons of MSC Virtuosa Cruise Ship in the UK, MSC Bellissima in Dubai 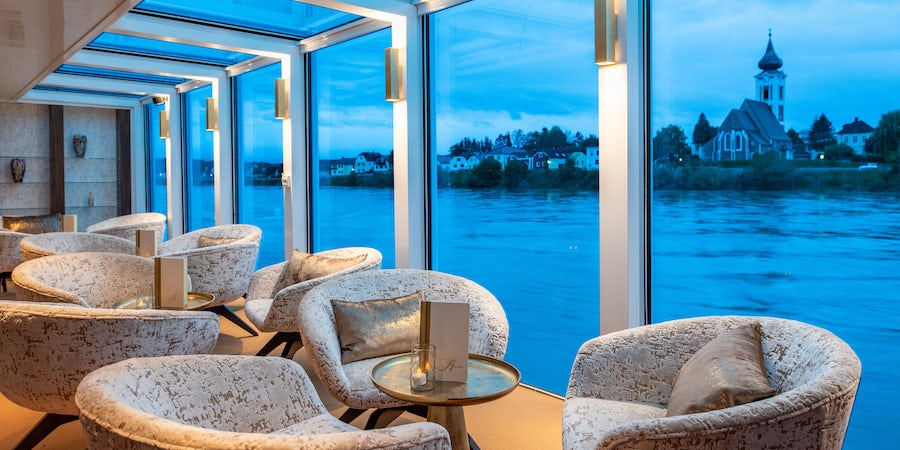 Just Back From Amadeus Star: The Austrian Line That's Making Its Mark In The U.K.

For many years Amadeus River Cruises sailed quietly under the radar compared with some of the big name river cruise lines on the scene. However, far from being a newcomer, it has a pedigree stretching back more than 30 years and is one of Europe's longest established river companies.

At one time Innsbruck-based Amadeus -- operated by the family of the same name and also marketed under the name Luftner Cruises -- mainly sold cruises to German-speakers. Amadeus has now partnered with Fred. River Cruises in the U.K. and begun marketing its European sailings in other countries.

The 164-passenger Amadeus Star, launched in spring 2019, is the 15th vessel in the fleet. So what can Brits expect from an Amadeus cruise?

With ship builds overseen by Amadeus founder Dr Wolfgang Luftner, and his wife Martina keeping a keen eye on the interior decor, the fleet's newest vessels feature some very nice touches. These range from walk-in wardrobes in every cabin, a gym, hair and massage salon, to small -- yet thoughtful -- details including a stool in front of the bathroom vanity unit, a big shelf in the shower for toiletries, plug sockets by mirrors (you'd be surprised how many lines don't think of this), and handy bowls in the cabins to store bits and bobs such as room keys.

The outside deck is reached through a set of double doors in the lounge so passengers sitting nearby don't get caught in a windy or chilly blast depending on the weather. New to Amadeus Star is a lovely sunken wine bar in the smaller Amadeus Lounge at the back of the ship, leading to an al fresco terrace with squashy all-weather seating that's a perfect spot for a sundowner.

If you like to sail with your fellow countrymen then Amadeus isn't for you. However, we liked the cosmopolitan onboard atmosphere with nationalities including Austrian, German, French, American, Canadian, Spanish and Japanese. With many of them speaking excellent English (much to the shame of our very limited language skills) it made from some interesting conversations as we got to know each other. Elsewhere, all announcements and information are spoken and written in English.

Unlike the majority of lines Amadeus doesn't operate an opening seating policy in the restaurant. You're allocated a table at the beginning of the cruise with other passengers of the same nationality or English speakers from other countries. In theory you could ask to be moved, but it could be uncomfortable as you're going to bump into your spurned tablemates for the rest of the sailing. However, once we got used to the concept it worked well. It saved having to walk around the dining room searching for somewhere to sit and we quickly built up a rapport with the wait staff (particularly the wine waitress!) and they quickly got to know our likes and dislikes.

With its international mix of passengers the food is very varied and you'd be hard pressed not to find something you like. There's an earlybird breakfast in the lounge, buffet and served breakfast in the main restaurant, light lunch in the lounge, full-on lunch in the dining room and a la carte five-course dinner. If you're still feeling peckish Amadeus holds up the tradition of a midnight snack, albeit a little earlier in the evening. Complimentary wine, beer and soft drinks are served with lunch and dinner and meals were consistently good. On same days there are themed meals and snacks served up on deck which reflect the destination, such as a meat heavy Bavarian fest (with veggie options available).

All crew members speak excellent English and are very personable and attentive.

Instead of the usual pianist, Amadeus has a pair of resident musicians/singers and on our cruise they played a variety of instruments making for a more extensive repertoire. There's an early morning stretching class, quizzes and competitions. Amadeus sometimes has a swashbuckling pirates' night where staff and (some) passengers dress up with whatever they can cobble together.

This is another area, akin to the seating set up at mealtimes, where Amadeus breaks the mould. Aside from some group holidays sold by tour operators, excursions are not included in the fare and passengers can sign up for a variety of "a la carte" packages -- usually a choice of three ranging from a handful of shore trips during the week to at least one, sometimes two, a day -- in advance or aboard, choosing to do as much or little as they want. Independent types can head off on the onboard bikes.

If you are looking for a good value, flexible and destination-rich European cruise on a stylish ship, and enjoy the company of a global crowd, then Amadeus fits the bill.