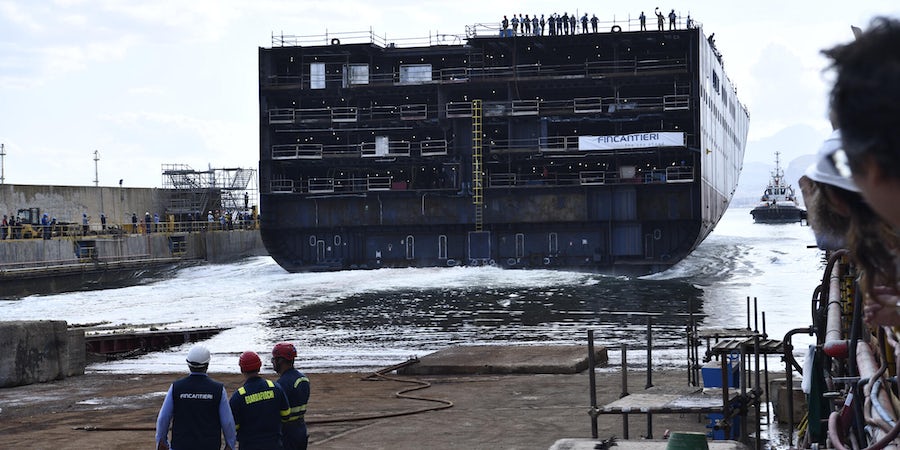 At a ceremony at Fincantieri's Palermo shipyard in Italy, the 269-foot-long, 115-foot-wide section was blessed by Padre Giovanni Cassata, with Madrina Giuseppa Catalano cutting the rope that released a celebratory bottle of Champagne against the hull for good luck.

The hull piece, which will form the lower forward section of the ship, will eventually be moved to Fincantieri's Marghera yard for assembly. Other blocks are being constructed at Marghera, and the ship will pass another major milestone when the keel (or bottom) of the vessel is laid down in the dry dock.

The ship's steel structure is expected to be completed in July 2020 and floated out shortly thereafter.

"This is Ryndam's first major milestone since the steel cutting, and it's so exciting to see a large portion of the ship taking shape and already in the water," said Orlando Ashford, president of Holland America Line. "Watching a new ship come together piece by piece builds anticipation, and we will soon be announcing the inaugural itineraries for Ryndam cruises in summer 2021."

Set to be completed in May 2021, Ryndam will be the fourth ship in the company's history to bear the name. At 99,500 tons, it will be the third Pinnacle-class ship in the Holland America Line fleet and will boast some of Holland America's newest features, including the 270-degree surround screen World Stage, Rudi's Sel de Mer dining venue, the Grand Dutch Cafe, Lincoln Center Stage, B.B. King's Blues Club and the Rolling Stone Rock Room.