You may also like
Dismiss
Just Back From a Jon Bon Jovi Cruise: 6 Things Fans Should Know
Just Back From Adventures By Disney: A Family-Friendly Danube River Cruise
Turner Classic Movies Cruise Returns in 2020 With Movie Stars, Screenings and More
The Jane McDonald Interview: On Cruising, Touring and What Ship She'd Like to Sail on Next
Six Things People Are Loving About the 7th Annual Turner Classic Movie Cruise
Just Back from the TCM Cruise: Diane Ladd Is Cruising's Newest Convert
Live From the Impractical Jokers Cruise: 7 Takeaways From Our Time Onboard
Live From SeaDream: What It's Like To Be a Passenger On the Only Transatlantic Cruise Sailing
Disney Wish to Feature First Disney Attraction at Sea, New Restaurants
Pixar Day at Sea Coming to Disney Fantasy Cruise Ship In 2023 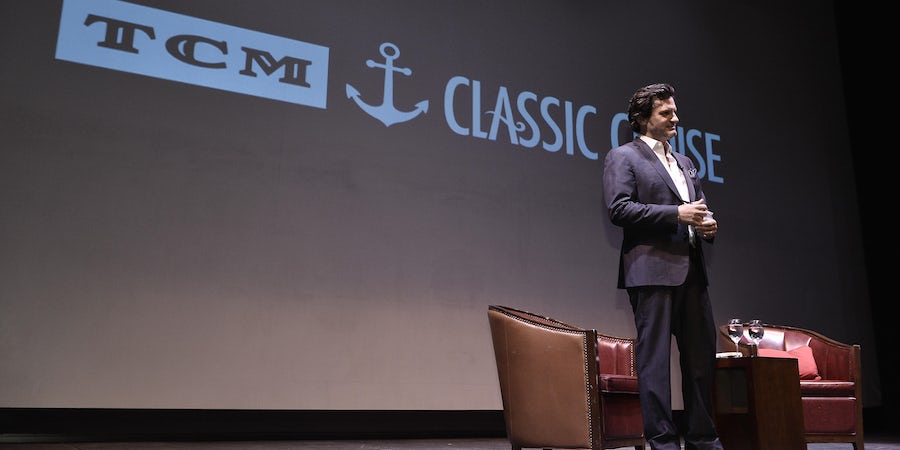 (9:30 a.m. EDT) -- Devotees of the cable channel Turner Classic Movies will tell you that TCM is to film enthusiasts what ESPN is to sports fans.  More extreme TCM followers would argue that movies are a whole lot more than an avid loyalty to one's hometown team and only a mite less than a religion.

It's no surprise, then, that TCM's fans can fill a cruise ship. The 7th annual TCM cruise sails October 22 - 27, 2019, aboard Disney Magic from New York to Bermuda and back. It’s already sold out; the company has announced it’s coming back in 2020 on an even bigger ship, Disney Fantasy.

"Imagine a couple thousand intensely dedicated movie fans in an enclosed space," says Ben Mankiewicz, the channel's primetime host and one of four hosts on the upcoming sailing.

If this conjures an image of Robert Redford admirers fighting Paul Newman fans to the mat as to who is cooler, that's not quite accurate -- although expect fans of both to attend the screening of "The Sting," one of the 50-plus films that will screen during the cruise.

We caught up with Mankiewicz to reveal what you need to know about the TCM cruise, whether you're booked on this month's sailing or considering signing up for the 2020 cruise.

TCM embraces all movie lovers and genres. Screenings range from sunny musicals like "On the Town" to film noir offerings like "Laura," from romances like "Roman Holiday" to action comedies like "Smokey and the Bandit," horror pics like "Psycho" and whodunits like "Chinatown." With movies running concurrently in four venues onboard, you're sure to find something that piques your interest.

Plus, not everyone on the cruise is movie crazy, says Mankiewicz, though 70 devoted fans have attended every TCM cruise to date. Often one half of a couple is a movie person and the other is agnostic. The latter, once introduced to all kinds of movies onboard, often converts to a movie person by the end of the cruise.

You can watch with the stars.

As Mankiewicz tells it, on any cruise you can watch movies in an auditorium with other passengers. Only on the TCM Cruise, however, can you watch a movie with its star present -- and ask her questions afterwards. Cicely Tyson, last year's winner of a lifetime Oscar, Academy-Award nominated actress of "Sounder" and Emmy winner of "The Autobiography of Miss Jean Pittman," is scheduled to be on hand this year to show her best-known films and sit for an interview with Mankiewicz.

Randy Haberkamp of the Motion Picture Academy will also be aboard as one of the guests on hand to provide behind-the-scenes anecdotes often as fascinating as the movies themselves. Leonard Maltin, Entertainment Tonight critic emeritus and walking film encyclopedia, will likewise be a shipboard resource.

It's not all about movies.

In Bermuda, passengers can head off on typical shore excursions -- and get some much needed sun after all those hours in dark screening rooms.

If you thought regular cruise ship trivia was fierce, movie fans are sure to take the competition up a notch or two.

"In which other affinity group does one encounter the depth of knowledge of sabermetricians those using statistics to analyze baseball and the breadth of history possessed by climate change scientists?" asks Mankiewicz. Bring your A game, or step aside.

Cari Beauchamp, a film historian who introduced movies on a prior cruise, says "Surprises are around every corner." According to Beauchamp, "Fans were thrilled when actress Ruta Lee greeted the opening of the elevator doors dressed in an emerald green gown and her signature boa." On previous cruises, Habercamp brought an Oscar statuette with him onboard

And six years ago, Ben Mankiewicz tied the knot with wife Lee Russo on Disney Magic during a TCM cruise. The cruise truly is more than just catching a few flicks on an island vacation.