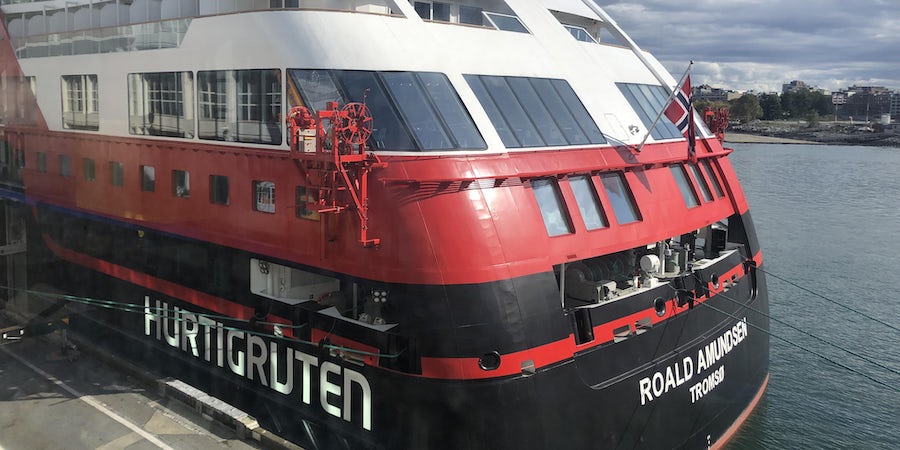 (10:10 a.m. EDT) -- While most ships launching these days carry punchy names like "Bliss" or "Edge," Roald Amundsen doesn't exactly roll off an English-speaking tongue; nor does the name of the cruise line, Hurtigruten, which has a near-comical Norwegian cadence. Identical sister ship Fridtjof Nansen, debuting in 2020, is equally challenging to master.

But there is nothing unclear about what the line has accomplished with the debut of the 530-passenger Roald Amundsen this past summer, launching the very first cruise ship partially powered by batteries.

We recently had a chance to visit Hurtigruten's newest flagship in Vancouver, after it completed its journey through the Northwest Passage. (Notable, because the ship is named after Norwegian explorer Roald Amundsen, the first person to do just that in 1906.)

The following things stood out to us about Hurtigruten's Roald Amundsen, a small ship with a big name -- and a potentially big impact on the cruise industry.

So what does that mean exactly? Think of it as a Prius model with Rolls Royce mechanics (the luxury car brand was contracted for vessel design and equipment, including much of it on the bridge -- up to and including the captain's chair). Two giant batteries, developed by Vancouver-based firm Corvus Energy, run in tandem with the ship's engine to conserve energy and ultimately cut fuel emissions by 20 percent.

CEO Daniel Skjeldam believes that battery power, not LNG (liquefied natural gas), is the way forward for the cruise business, and he hopes to remain industry leaders in sustainability at sea. Newer, stronger batteries are already in development, and in the years to come Hurtigruten plans to retrofit all of its ships, in part, with battery power. The company believes that fully emission-free cruising could be a reality in the next 10 to 20 years.

It has a 57-foot-high LED screen and underwater drones.

The "toys" onboard Roald Amundsen are not meant to dazzle passengers in a distracting way, but enhance the destination experience onboard. Rather than the overhead drones we've all become familiar with, newly developed underwater drones are able to capture sounds and images from beneath the sea -- from a pod of whales or a curious seal. (We're told the drones don't disrupt the marine life.)

In place of flashy chandeliers or sculptures, the centerpiece of the ship's atrium is a staggering, seven-deck-tall LED screen. Visible from the atrium's glass elevators, the screen showcases all of Hurtigruten's other destinations. Rolf, our tour guide, noting lots of glass and floor-to-ceiling windows in places like the Explorers Lounge, told us, "We like to bring the outside in; to show you things you can't see at home."

You might see a polar bear, then retire to a panoramic sauna.

In the spirit of embracing the destination (on primarily polar expeditions), the main activities onboard Roald Amundsen each day revolve around heading ashore or into inflatables for a closer view of the ice and the wildlife. One "landing" (akin to an excursion) per day is included in the price of cruise fare, and passengers rotate through opportunities to explore historic encampments ashore in Antarctica, go ice cruising, kayak or even camp on the ice overnight (conditions permitting and for an added fee). An Expedition Launch center -- like a mudroom on steroids -- preps passengers for a seamless experience off the ship and into the arctic; here you are geared up, debriefed and helped into marine crafts.

Back onboard, warm up by crackling (faux) fireplaces or embrace the Scandinavian spirit with time in the ship's stunning sauna, which provides views of the passing scenery. Massages and other treatments are also available in the spa, for a fee.

Expedition staff draw upon the company's 125-plus years of polar experience.

Hurtigruten has been operating since 1893, and in that time, over a century of expertise has been passed along throughout its history. Founded in the spirit of exploration, Hurtigruten contracts a world-class expedition staff with knowledge on various subject matters -- some are even full-time employees, a rarity. We're told expedition staff -- about 18 on an Antarctica cruise -- are solely there to consult and guide; they're not responsible for operating the inflatable boats, for example.

We met with an ornithologist and a professor emeritus of Scandinavian studies for the University of Washington. Others might specialize in cetaceans. The Science Center, on Deck 6, holds an impressive library of research materials, a lecture hall, displays of bird and animal skulls and skeletons endemic to the area, and microscopes for interacting with specimens, like plankton.

You can try traditional Norwegian cuisine -- along with boozy milkshakes.

Hurtigruten is Norwegian, through and through, so you can expect regional delicacies like smoked fish and a full cocktail menu containing their national spirit, Aquavit. But less expected is Fredheim, a (provisionally-included, other times a la carte) dining venue designed to be like a global market, with tortillas (with plant-based topping), sausages, burgers and crepes. Perhaps the best part are the milkshakes -- with optional alcohol -- in flavors like vanilla and chocolate or blueberry and cloudberry. (Skjeldam disclosed he once had three in one day -- we didn't ask whether or not they were spiked.)

Main dining restaurant Aune resembles an upscale bistro and serves three meals a day, with dinner being served course by course. Our halibut was among some of the best we've ever had. Fine dining restaurant Lindstrom serves an elevated version of Norwegian and international cuisine for a slight cover charge -- 25 euros at publication -- but free to suite guests.

The art is curated by a queen.

Hurtigruten has a standing relationship with the Norwegian royal family and they've leveraged this connection in a creative way. HM Queen Sonja of Norway has a deep affinity for the arts, and through her foundation QSPA, Roald Amundsen is home to a ship full of entirely original works by 16 Scandinavian artists specializing in printmaking and graphic art.

In fact, along the left wall in the Lindstrom restaurant are a series of three works painted by the queen herself. The cruise line is working on a brochure that will guide passengers through the art pieces located in the ship's public spaces.

A historic past and a future of firsts.

Hurtigruten -- a company that has gained its maritime chops primarily as a ferry service along the coast of Norway-- is no stranger to firsts. It became the first cruise company to completely eliminate single-use plastics onboard, and in November it will claim the first ship inaugurated in Antarctica when MS Roald Amundsen makes its maiden voyage. Not only that, but it will be christened with a chunk of ice (not the traditional Champagne) as a nod to its eponymous explorer who did the same with his ship, Fram. This time, the ship will be christened by godmother Karin Strand, Hurtigruten's VP of Expeditions, a woman with decades of expedition experience on the White Continent.

In addition to crossing the Northwest Passage, Amundsen the explorer is also known as the first person to reach both the North and South Poles. An excerpt from Amundsen's diary at age 10, found after the ship was already being built, expresses his eerily predictive young wish for "an electric ship that could break through all kinds of ice…" Fittingly, our encounter with this vessel built using groundbreaking hybrid technology was on the same day as a citywide rally on climate change.

It's promising to see another side of Alaska.

Branching out from the coast of Norway and beyond the Arctic Ocean, Hurtigruten is bringing Roald Amundsen back to Vancouver in May 2020 to sail an inaugural summer season in Alaska. The line plans to bring its passion for small, remote ports and their local communities to the 49th State over the course of 10 departures. An 18-day Aleutian Islands itinerary sailing August 1 includes Kodiak, Dutch Harbor, Unga Village, St. Matthew Island and Nome, among its unusual ports of call.

A tagline used again and again in the presentations we heard about Hurtigruten's ethos was "Arrive as guests, but leave as friends." The company has already established partnerships with Inuit communities in the high arctic -- like Ilulissat, Greenland or Nunavut, Canada -- and we're curious to see how all of the line's energies -- both battery-powered and from the heart -- translate to U.S. waters.