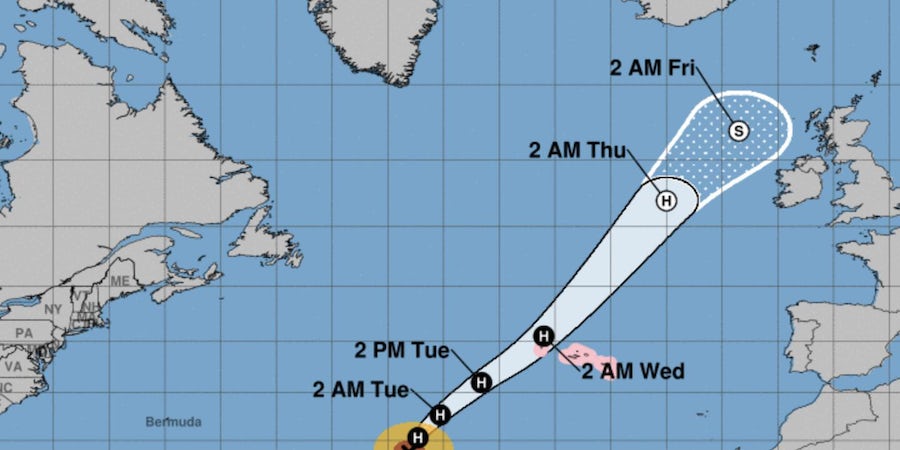 (6:45 a.m. EST) -- Hurricane Lorenzo, which is heading towards the Azores archipelago in the North Atlantic as a Category 2 storm, is forcing some cruise lines to make itinerary changes.

The National Hurricane Center is forecasting the storm as a large hurricane, with maximum sustained winds of 105 miles per hour. The center of Lorenzo is forecast to pass near the western Azores early on Wednesday, October 2.

A Hurricane Watch is currently in effect for Flores, Corvo, Faial, Pico, Sao Jorge, Graciosa and Terceira. A Tropical Storm Watch is in effect for Sao Miguel, the island which is home to the Azores’ main cruise port of Ponta Delgada, and Santa Maria.

Here are the cruise ship changes reported so far. Cruise Critic will continue to update this story as needed.

Explorer of the Seas, which departed Southampton on September 21 on a 14-night sailing, has seen itinerary changes. The September 29th call to Santa Margherita, Italy, was replaced with a sea day. The ship will call in Malaga today, September 30, followed by two sea days, and an overnight call to Le Havre (for Paris) on October 3, before returning to Southampton as scheduled on October 5.

Crown Princess, which departed Southampton on September 10 on a 28-night repositioning cruise to Florida, has canceled its call in Ponta Delgada on October 1. Crown Princess will continue to the next port of call, Port Everglades, where the ship is expected to arrive on schedule on October 8.