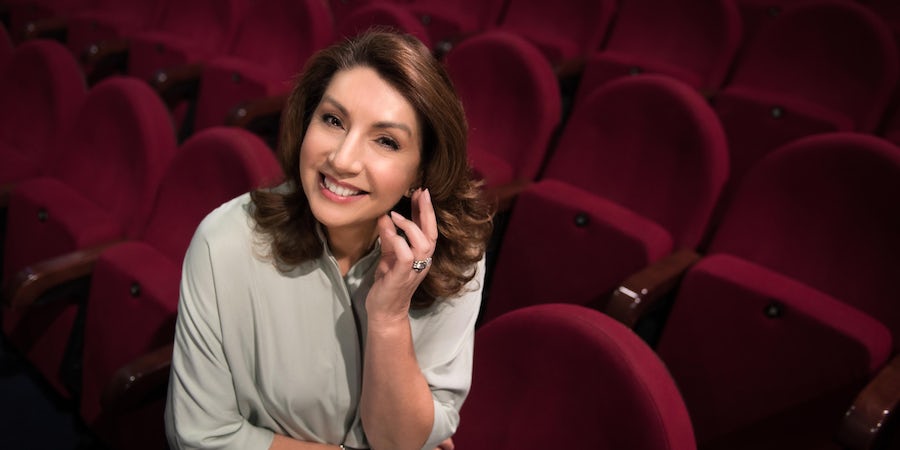 The Jane McDonald Interview: On Cruising, Touring and What Ship She'd Like to Sail on Next

In an exclusive interview, Cruise Critic's UK Editor Adam Coulter caught up with Queen of Cruise Jane McDonald to talk about the new series of "Cruising with Jane McDonald", chartering one of the biggest ship's in the world for next year's "Sail Away" cruise -- and why she's bigger than Jon Bon Jovi.

Sail Away With Jane McDonald

When I meet Jane McDonald in Ipswich's Regent Theatre on September 20th, it's exactly a year to the day until Royal Caribbean's 4,200-passenger Anthem of the Seas sets sail from Southampton on a special charter cruise -- "Sail Away with Jane McDonald".

It's testament to her popularity that "Sail Away With Jane McDonald" is not only twice the size of a regular charter, it's also on a modern ship and nearly twice the duration of a typical sailing -- a week compared to four days.

I tell her this and she replies: "I start to panic a little bit."

When I tell her that Jon Bon Jovi's "Runaway to Paradise" cruise was on a ship half the size of Anthem of the Seas and half the length of time, she says: "Well we would have sold out by now on a smaller ship."

She laughs: "So I would have done Bon Jovi by now."

"I've been in talks to do this cruise for 20-odd years, even from the first cruise because there was a massive following from there.

"And then when it came up again, I just thought it's now we need to do the Sail Away cruise. And then I thought about my fans, and a lot of them won't want to fly. So let's try the Southampton to Southampton sailing.

"So it all just came together. The stars aligned."

Jane herself will be doing two concerts and a Q&A session onboard. I ask her if she can reveal who the support acts will be: "I can't say right now. I'm keeping those under wraps for a while."

However, the theatre show will be the former long-running West End show "We Will Rock You," which showcases Queen's music.

We move onto her hugely successful, Bafta-award-winning Channel 5 show, "Cruising with Jane McDonald".

Did the show's popularity take you by surprise? "Yes it took us all by surprise! A lot of things I do take me by surprise. Even this last three years of touring, usually you start to peter off, but it's actually been getting bigger and bigger and bigger, and you think 'wow, this is incredible'."

Throughout the six shows, Jane has been on a large number of lines, including some (MSC, Uniworld, Celestyal) twice.

During our chat she confirms that a seventh series of "Cruising with…" will air later this year: "We're just filming the last bit of it. We've been filming it all year in between the tour shows.

"I know it's coming out over the winter, but I can't really say much more."

We find out later that one of the lines featured will be Silversea and the destination will be the Adriatic, but I can't get any more out of her on the subject, except that the production crew are getting her to do more and more energetic excursions:

"I am getting like GI Jane -- they keep throwing things in for me to do, and I do a lot of things that a woman my age probably wouldn't be doing."

Do you pinch yourself sometimes? Did you ever expect this?

"I've seen them go through tragedy in their lives, as they have me."

As if on cue, a fan waves through the window of the foyer of the theatre to Jane who gives them a big smile back.

What line would you like to go on that you haven't yet?

"If I did have a break on the touring, that's probably one I'd think about doing -- a world cruise."

Jane is, of course, referring to Regent Seven Seas Explorer, which has recently been featured in a Channel 5 show "The Most Expensive Cruise Ship in the World". The ship's top cabin, the Regent Suite, comes with a $250,000 grand Steinway piano, a personal butler and its own in-suite spa, and sells for $5,000 per person, per day.

We ask Jane if she's keen to stay in the top suite. "I'm not really bothered -- in the broom cupboard -- because every room on that ship is stunning."

She adds: "I might even take long term partner Ed on that one. I would like to have him there, and I think he'd be up for that."

She also confirms she would love to do the Transatlantic crossing on Cunard's Queen Mary 2 but questions whether it would be suitable for the show:

"I would like to do a Transatlantic. I think it would be good, but it's a question of how much you can film. That's the only problem.

"When you go on a Transatlantic it's to have a rest, and the most boring thing is to watch me on the sun lounger all day."

Did you ever expect to win a Bafta? She laughs: "Never in a million years. Oh come on -- I didn't even want to turn up. I was like, 'why am I even bothering going?'

"Then I saw the other nominees we were up against. It was 'Antiques Roadshow'.... They were big shows, and I just thought: 'Let's not even bother' and I had to be up the next day at 8 a.m. doing 'Jane and Friends' in Manchester.

"Then they got in touch with my fella Ed and said 'look would you come with her?' and he said 'yeah, I'll come with her'.

"Anyway, he managed to persuade me. I had nothing written, and it was my executive producer Mark Powell who said: 'Look I've just written something just in case, but you won't need it, so just put it in your purse'.

"So that's exactly what I did. Then we did win, I was scrambling around thinking: 'Holy cow we've just won this thing'.

"I was speechless." She pauses, and cracks up: "Well I literally was! I was so shocked. Honestly, it still hasn't sunk in."

Jane reveals she keeps her award by her TV: "So every time I'm watching I can say: 'There's my Bafta'."

Cruising is for Everyone

I ask her how things have changed in the 20 years she has been on the high seas, and on our screens:

"I think the main thing is it's amazing there are so many different cruise lines now. It used to be for the very rich, which was all about fine dining, fine wines, dressing up. But things have changed now. I love to see so many families coming onboard, and it wasn't like that 20 years ago.

"And of course everybody on the ship is catered for. You come on with the kids, and you don't seem them for two weeks.

"And that's opened it out to a much wider audience, and I think that's the beauty of the cruising industry now. There's so much choice."

And what about for those people wavering about booking a cruise holiday?

She says: "Cruising has moved with the times. You can still go on your very posh dining one or have a party cruise with all your family.

"And no matter what cruise I'm on, I find the magic in it. I just love cruising. There's something about being on the water that just frees me. And I think cruising is the ultimate holiday."