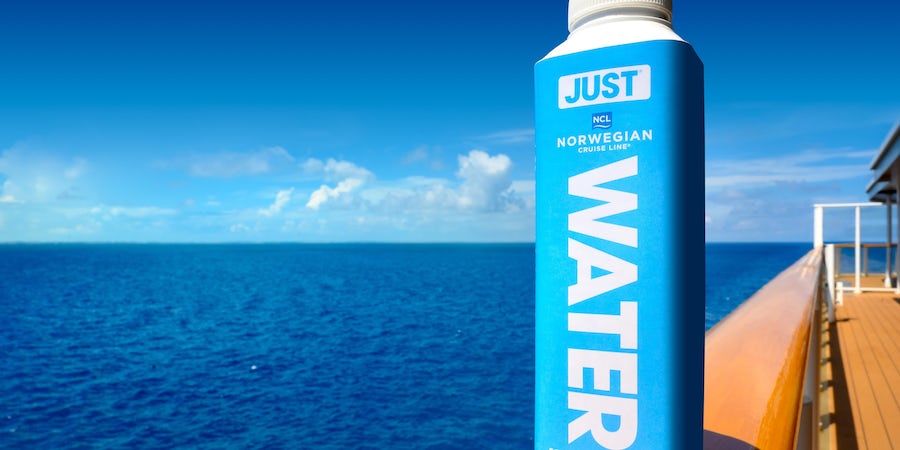 (6 a.m. EDT) -- Norwegian Cruise Line will become the first cruise line in the big-ship cruise industry to eliminate all plastic water bottles across its entire ship by January 1, 2020.

By partnering with JUST Goods, Inc., which will provide packaged water in plant-based cartons, the cruise line anticipates eliminating six million plastic bottles a year. The line will debut the new cartons on its new ship, Norwegian Encore, when it debuts in October.

"Eliminating straws was just the first step," said the line's president and CEO Andy Stuart. The line is extremely focused on protecting the environment, he added, and has been working on a project to eliminate all single use plastics across the fleet for some time.

"Our goal is to absolutely minimize our footprint wherever we go in the world. We want to be a company that's leading the way," he said, emphasizing they don't just want to follow regulations, they want to surpass them. "We're doing this because it's the right thing to do, not because it's something we have to do."

Through the partnership, JUST Goods, Inc. (founded by American rapper, actor and activist Jaden Smith) will supply the cruise line with its JUST Water products, all of which use 100 percent spring water and are packaged in plant-based cartons. The cartons are made of 82 percent renewable materials; the paper part is made from trees grown in responsibly-managed forests and the cap and shoulder are made from a sugarcane-based plastic. (The cartons do contain 3 percent aluminum as there has to be a non-porous barrier between the carton and the water.)

Additionally, the cartons are refillable, though Stuart told Cruise Critic he probably wouldn't use one for more than a few refills. They're also recyclable and do need to be disposed of correctly onboard the ships.

Stuart said it wasn't just the sourcing of the water and the packaging material he found impressive; he's also impressed with how the company pays attention to shipping. By having bottling facilities in three spots around the world, JUST can also cut down on the energy waste and emissions used in the shipping process.

"We don't want to dilute the impact of the bottles through the shipping process. JUST has an end-to-end impact," Stuart said.

Norwegian's efforts to eliminate single-use plastics are part of a larger effort by the entire cruise industry to protect the environment, and the oceans on which it depends so heavily.

"Broadly, the industry is working very hard in this area and has made tremendous efforts to reduce the industry's footprint," Stuart said, hazarding a guess that other cruise lines will find their own solutions over time. (Virgin Voyages, for instance, has already said it will be entirely single-use plastic free when it launches in spring 2020.)