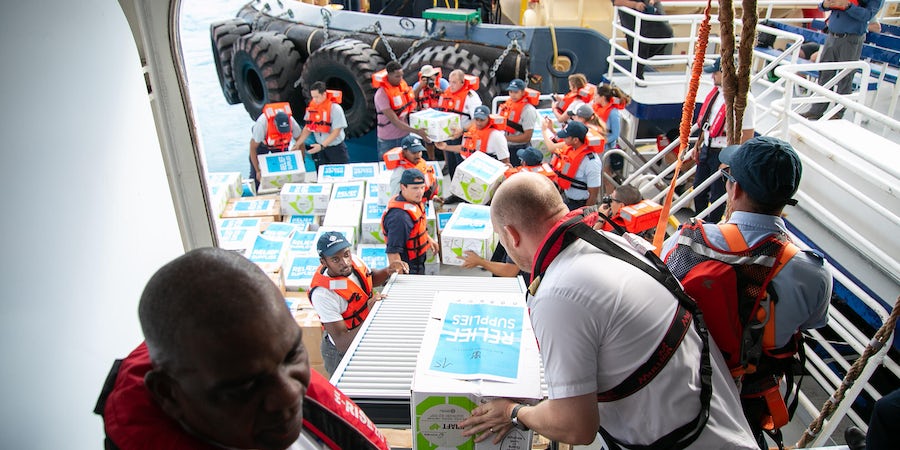 After the Storm: What Cruisers Should Know About the Bahamas and Hurricane Dorian

(4:51 p.m. EDT) -- Hurricane Dorian, which officially fizzled out over the open Atlantic after nearly two weeks, has left a trail of damage in its wake, extending from the Caribbean up through the Canadian Maritimes. Below, we recap what you should know about the storm, what cruise lines are doing to help and how you can get involved.

The storm, which hit Grand Bahama Island and the Abaco Islands on September 2 as a Category 5 hurricane with the highest wind speeds ever recorded, has left the Bahamas reeling. At least 50 people are dead, and some 2,500 are missing, with those numbers expected to rise in the coming days. Early reports say 45 percent of homes have been damaged or destroyed, leaving thousands more people homeless.

Hurricane Dorian also heavily affected cruises to the Bahamas and, to a lesser extent, Canada and New England. More than 60 individual sailings and an estimated 180,000 passengers (based on double occupancy) were affected by the storm. The severity of changes ranged from itinerary swaps to lengthened, shortened and even cancelled sailings.

All affected cruise ports and cruise line private islands have reopened, with the exception of Freeport, which sustained serious damage and is currently open only to ships bringing in humanitarian aid. While the harbor and docking areas were relatively spared, operations are being hampered by a lack of electricity, running water and necessary operational staff on the island. It is not known when the port will reopen to cruise passengers.

Nassau, another popular Bahamas cruise port, was spared the devastation that occurred on Grand Bahama Island and remains open.

Tourism is a huge economical driver for the Bahamas. Nearly half of all Bahamians are employed within the tourism sector, and tourism itself accounts for 60 percent of the country's $9 billion economy. Bahamian officials are urging travelers to continue visiting areas of the Bahamas that were undamaged.

Now that the danger from Dorian has passed, cruise lines -- many of which count the Bahamas as a primary market -- are lending a helping hand.

American Queen Steamboat Company: The line has set up a donation system on all of its riverboats to aid the relief and recovery efforts in the Bahamas. Passengers and crew can contribute by visiting the reception desk onboard each vessel and can charge donations to their onboard accounts or pay in cash.

The line is working with All Hands and Hearts, in conjunction with the Government of the Bahamas. Additionally, AQSC promised to contribute supplies like clean towels, linens, soap and other items that will be loaded in Miami and sent via ship to the islands.

Bahamas Paradise Cruise Line: Bahamas Paradise has been working closely with the Bahamian Government, donating one of its ships to evacuate residents before Dorian hit last week and utilizing it to send first responders, physicians, a salvage crew and a team of experts to evaluate the island's damaged electrical grid.

The two-ship cruise line has cancelled sailings aboard Grand Celebration through September 20 as it continues to use the ship, which regularly sails short voyages from Palm Beach to Grand Bahama Island, for humanitarian aid.

The line is accepting monetary donations online through its partner,

, as well as donated supplies at its Riviera Beach warehouse.

MSC Group: MSC Group, which includes MSC's cargo operations and MSC Cruises, committed to using its cargo fleet to procure and transport needed supplies to the Bahamas. The company says it will also assist with long-term needs, including semi-permanent housing.

Norwegian Cruise Line: NCL has donated $2 million to recovery efforts, in partnership with All Hands and Hearts, inclusive of the donations it promises to match dollar for dollar. The cruise line also sent Norwegian Breakaway on a special humanitarian mission to the Bahamas on September 5 to deliver supplies collected by its team members and the City of Miami.

Royal Caribbean: Royal Caribbean also pledged $1 million and announced it will match donations given to its partner, the Pan American Development Foundation (PADF), along with a network of local Bahamian charities. Donations can be made through the PADF website.

The line, along with sister brand Celebrity Cruises, has also been making pit stops during its regular sailings to deliver relief items, such as generators, water, cleaning supplies and clean linens.

Additionally, the Bahamas tourism bureau has set up a

to which you can donate. The page also offers a list of supplies that are needed.