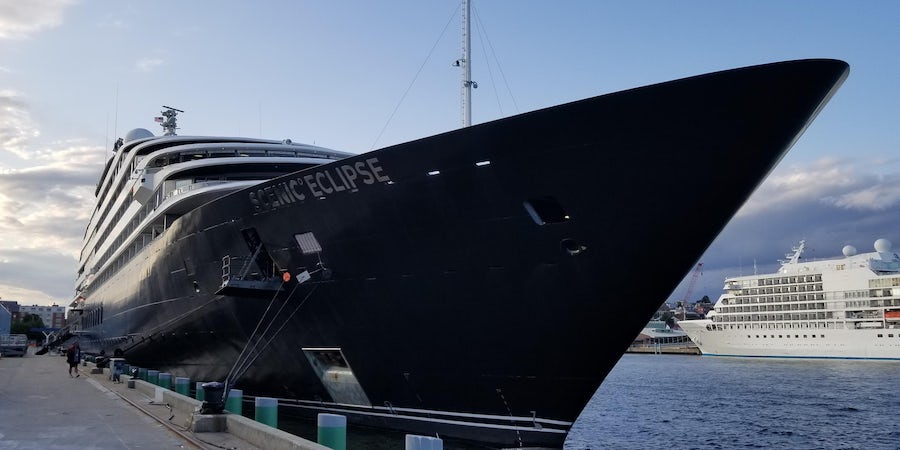 In front of cruise line executives, passengers, journalists and other VIPs at Manhattan Cruise Terminal, where the ship was docked alongside Pier 88, the actress spoke passionately about what it meant to be named godmother before reciting the traditional blessing: "May God bless this ship and all who sail on her."

With that, Mirren and the christening party moved from the terminal to the pier, where a bottle was sent careening into the hull of the ship after a 10-second countdown.

Scenic Eclipse is the first oceangoing cruise vessel from Scenic, an Australia-based company that specializes in luxury river cruising. The ship includes a whopping eight restaurants, extensive spa, two helicopters and one submarine. It will sail seasonally to the polar regions of the world, offering some options in the Mediterranean and other areas around the world.

Travel expert Claire Newell, herself a godmother of one the cruise line's river ships, served as emcee, welcoming guests. To kick things off, the port presented a plaque to chairman and founder Glen Moroney along with Captain James Griffiths, honoring the ship's first visit to New York City.

Moroney then took the stage, discussing the aim of Scenic Eclipse, saying the idea began percolating in 2012, loosely based on the concept of allowing passengers to feel like billionaires, sailing on a personal mega-yacht.

"I won't go through all the ups and downs," Moroney said, citing some of the delays the ship faced during construction; Eclipse launched about a year after it had originally been scheduled to sail. He also thanked a number of people, including the line's loyal passengers, some of whom just disembarked from the ship.

And with that, it was time for Mirren, an Oscar-, Tony- and Emmy-Award-winning actress, to shine. Wearing a smart gray and red suit along with an elegantly simple black headwrap, Mirren called being the ship's godmother "an incredible honor."

Mirren has never cruised but said serving as godmother to Scenic Eclipse "means a huge amount, actually." She said she was excited to sail on her first cruise, and it would come on Scenic Eclipse.

Mirren also cited the ship's commitment to the environment as a reason she's excited to play the role of godmother; Scenic Eclipse offers an advanced water treatment system and a dynamic positioning system aimed at reducing environmental effect on sensitive regions of the world.

"I don't think I would have been interested if it weren't a green ship," Mirren said.

Asked what character Scenic Eclipse would be if it were a character in a film, Mirren didn't hesitate, responding "Definitely a queen," adding it would be a "hip, young, modern" queen.

"If Neptune had a queen, she might be Scenic Eclipse," Mirren said.