You may also like
Dismiss
Coronavirus: Updated Cruise Ship Policies and Cancellations Because of COVID-19 (2021)
Rolling Out the Deals: Why Now Might Be a Great Time to Book a Cruise
Royal Caribbean's Anthem of the Seas Cruise Ship to be Based in Southampton in 2021
Cruising the Newest Ship Afloat: Live From Celebrity Apex
Live From Celebrity Edge: A Cruise That Seems Normal Again; "I'm So Hopeful"
U.K. Black Friday & Cyber Monday Cruise Deals -- Extended
NCL Reveals More Dining, Design Details on New Cruise Ships Norwegian Prima and Norwegian Viva
A 'Thor: Love and Thunder' Cameo That Gets Cruise Fans Excited
Just Back From Allure of The Seas' Maiden Galveston Sailing: Hits and Misses 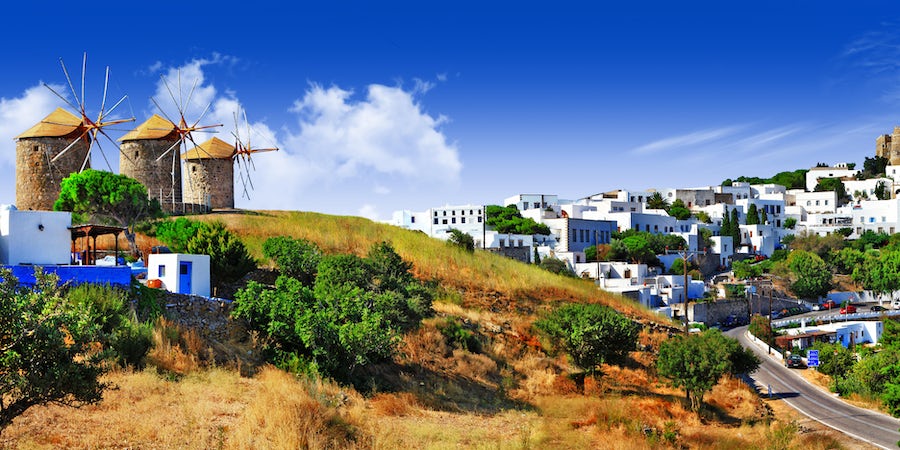 Just Back From Greece: An Island-Hopping Cruise Aboard Azamara Pursuit

Greece contains more than 6,000 islands, yet most people only see photos of the whitewashed villages of Santorini or the windmills and wine bars of Mykonos. But did you know the Book of Revelations was written on the same small island where David Bowie spent his holidays? Or that people live in quaint villages surrounded by kiwi farms and modern coffee shops at the foot of Mount Olympus?

We didn't either. An 11-night Greece-intensive cruise with Azamara led to those discoveries -- and more -- as we visited seven different Greek islands (plus Kusadasi, Turkey) from Athens. In fact, Azamara now offers a number of other country-intensive cruises each year to destinations such as Croatia, Norway and Japan

Here's what we learned about a country-intensive sailing from our cruise through Greece on Azamara Pursuit.

It's all about the itinerary.

The proof is in the ports. For people who cruise Azamara, it's the destinations visited that make or break a cruise vacation. The small-ship cruise line offers carefully plotted courses across the globe into out-of-the-way places. In our case, even a late replacement (Patmos, Bowie's holy island) turned out to be a pleasant surprise, offering goosebumps in the Cave of the Apocalypse pilgrimage site and at a mountaintop monastery overlooking the island and the bay. We rarely saw another cruise ship docked, except in Mykonos or Santorini.

Some days we watched the sun rise as we sailed into a gorgeous new Greek port and then watched it set again over the island, with sometimes more than 12 hours in port, you are able to make the most of your precious time. Even all-day shore excursions still left enough time to grab a frappe (local iced coffee) at a waterfront cafe. It's also possible to plan independent tours a bit farther afield, leaving yourself more minutes to linger over lunch in an ancient village or to get a little lost in the labyrinthine streets. In Santorini, we were able to miss some of the long lines at the cable car, arriving before most mega-ships disembarked; in Mykonos, we were able to feel the city buzz awake for its legendary nightlife.

With a maximum of 702 passengers, Azamara Pursuit hits that sweet spot between intimate, but not too small. We were onboard for the ship's one-year anniversary as Azamara Pursuit, and we can see why it's such a welcome addition to a previously two-ship fleet. You never feel crowded or claustrophobic. (Grabbing an empty elevator straight down to the gangway with no wait on disembarkation day was an unmatched thrill.) Listening to passenger feedback, the line removed casinos across the fleet, leaving a central lounge called The Den, where cruisers can go to plan their day in port (or even their next cruise), play trivia, listen to piano or have a drink. The overall atmosphere is easygoing, with no formal nights and few gimmicks. Above all, it's a comfortable place to come back to after often-long days exploring ashore.

A major part of why the ship feels so homey is the crew. Service is genuinely warm and there weren't those awkward moments of feigned politeness; staff was friendly, personable and accommodating. On a cruise line with a selection of included drinks, we questioned how eager servers would be to take endless orders of the house rose or deliver a daily cheese plate to the cabin, but it was always carried out with pleasure. Other guests -- especially those climbing the ranks of the line's loyalty program -- have said the attention to detail and the conviviality is the major draw. Loyal Azamara cruisers have even followed the careers of captains and beloved crew over the past dozen years -- checking in on how family members were doing and recounting past voyages with together with a shared fondness.

Azamara knows the meaning of a special event.

Azamara really shines on special occasions. The Azamazing Evening, a once-per-cruise event included in the cruise fare, was an unforgettable classical concert under the stars in Turkey and among the 2,000-year-old ruins of Ephesus. We looked forward to the White Night the entire cruise, and weren't disappointed; here is where we felt the line's commitment to destination immersion come alive. What can only be called a feast -- grills a-blazing -- -- was laid out among tables and linens on the pool deck, complete with local specialties like lamb souvlaki, feta salads and sweets. A traditional Greek dance troupe came onboard to perform. Each cruise ends with a chocolate buffet, but in the cozy atrium; it's an impressive display that either serves as a delightful gathering to say your goodbyes or the pick-me-up you'll need before packing. Even one-off celebrations are given proper recognition, as the entire ship celebrated Azamara Pursuit's birthday with a special menu, raffles, live music and a cake replica of the ship (of course).

The itinerary and the service we received truly made our sailing a standout. However, there were a few areas where we felt the line could improve its destination immersion program.

The onboard shore excursion team ran a tight ship, always helpful and informative -- and tours ran on time. However, we felt that the general structure of many of the shore excursions being offered were pretty typical of any cruise, rather than a unique experience only available with Azamara. A tour of the villages of Paros was primarily a bus to a village while we struggled to make sure we could hear the guide. An included coffee break sounded pleasant until we realized it left us with nearly no free time to explore a charming seaside village. Little free time to explore is an Achilles heel of cruise tours, but it shouldn't be so with the amount of time Azamara spends in port.

Guides were hit or miss, droning endlessly on an early-morning departure to a bus of sleeping passengers; in one extreme case, a guide was clearly hungover. While some tours -- for example, shopping with the chef in Thessaloniki -- did seem to have the potential to be standout experiences, they are not unique to Azamara as more and more cruise lines have begun to offer these same types of "immersive" or "authentic" excursions. A possible rebranding of tour offerings could help, highlighting by category "must-see" attractions (like Meteora from Volos or Ephesus from Kusadasi) along with alternatives for active-types or those looking for a lazy Greek beach day.

There was a lecturer onboard our 11-night sailing, but the topics made us scratch our head a bit. A former professional in the naval and space industries spoke about marine mammals and maritime navigation, but with such a rich resources of ancient culture and civilization, we wondered why not a single talk was given about Greece. After all, on such an intensive itinerary, inviting someone onboard to speak about the place we were in seems like a no-brainer. True that there was only one sea day to entirely spend onboard for the duration of our cruise. But even a short lesson on a few key words in Greek would go a long way over the course of nearly two weeks in the country. The one local performance lasted just a half-hour (at the White Night) and while it was enjoyable, we would have attended a full show from a Greek performer in the theater one evening. A variety of Greek wine was offered onboard, but we would have loved to see a local winemaker host a tasting or demonstration.

In The Den is a research library of travel books. But we found it strange that shelves seemed to have just a few books on them and that none of the books on Greece or Turkey were highlighted in any way. A small "featured" shelf near the front could resolve that.

Local food and beverage were just a tease.

The first night kicked off with a full Greek buffet, and we were settling in for 10 more satisfying nights of gyros, salads and baklava. Which is why we were slightly disappointed when Greek selections seemed scant throughout the rest of the voyage; White Night was the only other evening when traditional Greek foods were highlighted. Otherwise, the "immersion" dishes in the main dining room were Indian or some other ethnicity. With room for variety on the rest of the menus in the dining room and buffet, we feel one Greek dish per day wouldn't be overdoing it. A list of Destination Immersion wines was offered -- and yes, they were all Greek -- but none were part of the included wine menu, and prices by the bottle were well above what you would pay to pick up a bottle in port. We were also holding our breath for an ouzo toast that never materialized.

Scanning through the informational binder in our cabin, we came across a blurb that mentioned Spirits Bar in The Den had a custom cocktail menu, sponsored by the travel publication AFAR and inspired by global destinations. We ran to Spirits on the first night to ogle this drinks menu only to discover that no one on staff knew what we were talking about.

When you're visiting a country like Greece, with so many spectacular locales, drinks, food and culture, there is no such thing as too much immersion. While Azamara delivered by bringing us to places truly off the beaten path, there's room to improve aspects of the onboard experience, so it doesn't become a total escape from the destination. In kind, tours that "immerse" in the ports visited must reach beyond large group bus tours to not only offer unique destinations, but also differentiating, one-of-a-kind experiences.