You may also like
Dismiss
Coronavirus: Updated Cruise Ship Policies and Cancellations Because of COVID-19 (2021)
Royal Caribbean's Anthem of the Seas Cruise Ship to be Based in Southampton in 2021
Ships Ahoy! A Weekly Round-Up Of Worldwide Cruise Ship News
Ships on the Move: Your Weekly Cruise Ship Round-Up
Allure of the Seas Cruise Ship to Make Oasis-Class Debut in Galveston
Norwegian Breakaway Cruise Ship Returns To New York: We Chat With NCL President Harry Sommer
"Cruising With…" Set to Return Next Year -- But Without Jane McDonald
Emerald Cruises Officially Launches in Australia
MSC Cruises Extends Seasons of MSC Virtuosa Cruise Ship in the UK, MSC Bellissima in Dubai
These Ships Are Coming Back To The U.S. in 2022: Here’s Why You Should Care 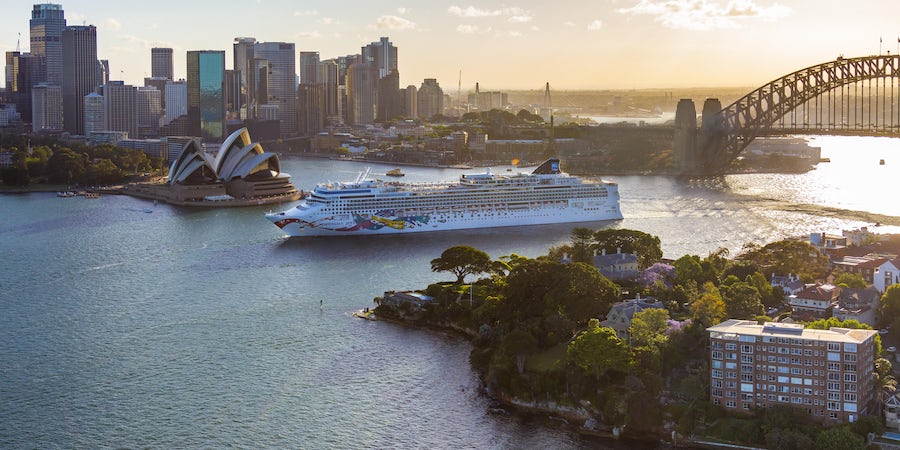 (10.15 a.m. AEST) – With more ships sailing in our region than ever before, including several making maiden visits and some with features not previously seen in Australia, there are exciting times ahead for local cruisers.

Princess Cruises 2019/20 Australian cruise season will be the largest in the line’s history with a record-breaking 900+ day deployment across five ships on itineraries from Sydney, Auckland, Adelaide, Melbourne, Brisbane, and Fremantle where Sun Princess will be deployed for a record 141 days.

Royal Caribbean’s Radiance of the Seas and Ovation of the Seas will return to Sydney in October. Voyager of the Seas joins these ships the following month, fresh from a US$97 million renovation. Royal Caribbean will homeport all three ships in Sydney and offer sailings to the South Pacific, New Zealand, and Australian destinations.

P&O Cruises will offer sailings from Sydney on Pacific Explorer and Pacific Aria. Pacific Aria will also sail from Brisbane, Melbourne, and Adelaide this season. Pacific Dawn will continue to be based in Brisbane.

Dream Cruises’ will be sailing in our region for the first time this season. Fresh from a NZ$85 million refurbishment, the line’s Australia based Explorer Dream will offer sailings from Brisbane, Sydney, and Auckland. The 1,870 passenger ship may look familiar to some local cruisers as Explorer Dream has previously sailed in Australia under the name Super Star Virgo.

CMV’s newest ship Vasco da Gama is another new arrival. The ship will homeport in Adelaide and Fremantle, and also offer cruises from Auckland, Sydney, and Singapore. Vasco da Gama’s inaugural season features the world’s first-ever gin-themed ocean cruise, the first ever World Fringe Festival show on the water and a Military History cruise from Sydney.

Holland America’s Noordam will be based in Sydney again and sister ship Maasdam will offer a selection of longer sailings from Sydney ranging from 14 to 37 days. Norwegian Jewel will also return to Sydney this season.

Carnival Cruise Lines is also returning with two ships. Carnival Splendor will arrive in her new homeport of Sydney in December, becoming the newest and largest ship home ported year-round in Australia. Carnival Spirit is also returning to Sydney, before relocating to Brisbane in October 2020 to homeport from the new Queensland cruise terminal.

Ponant’s luxurious ship Le Laperouse will offer sailings from Sydney, Cairns, Darwin, and Broome in 2020, plus a Hobart cruise in partnership with National Geographic Expeditions which includes activities with expert guides and a National Geographic Photographer.

Silversea’s Silver Muse will sail from Sydney, Melbourne, and Auckland. Silver Whisper will offer one sailing from Sydney and one from Melbourne in early 2020.

Cunard’s Queen Elizabeth will be based in Australia for more than 100 days this season, and offer sailings from Sydney, Melbourne, Adelaide, and Perth. Journeys range from short two-night trips to a 21-night sailing exploring Tasmania and Papua New Guinea.