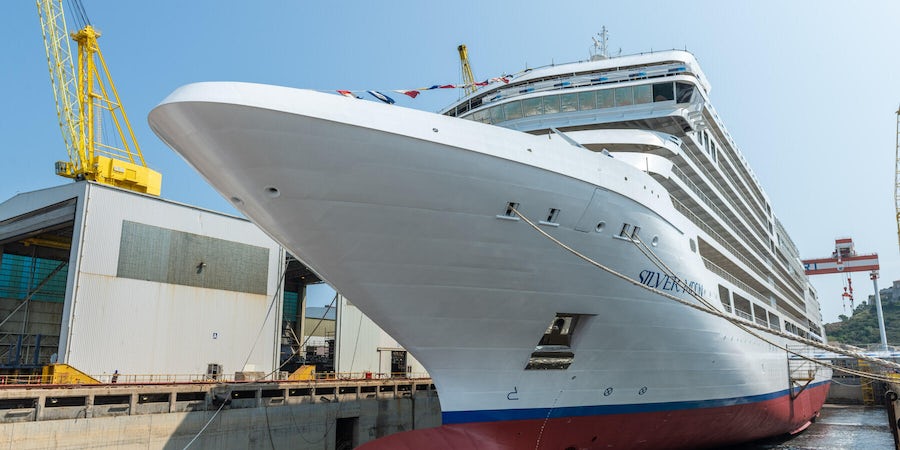 Silversea's Next New Cruise Ship Floats Out In Italy

(11:20 a.m. EDT) -- Silver Moon, the next new ship from luxury cruise line Silversea, touched water for the first time today during its float out in Ancona, Italy, at Fincantieri shipyard.

A coin ceremony is a traditional shipbuilding event, while a madrina serves as the initial ship godmother as the ship is built. Bonisiol is a payload engineer and specialist in interior design for Fincantieri. A different godmother will be named for the ship's christening ceremony next year.

With the coin mounted in place, the festivities moved outside, where bright white tents and royal blue carpets temporarily broke up the steel-and-concrete landscape of the shipyard. Lefebvre d'Ovidio, Stecconi and Bonisiol posed for photos as the star of the show, Silver Moon, sat on blocks behind the action, waiting to leave dry dock.

Speeches complete, a priest blessed the ship -- and all in attendance -- before Bonisiol took up a tiny ax and cut a cord, sending a bottle of Champagne careening into the hull of Silver Moon, where it smashed, prompting thunderous applause. Seconds later, water began flowing into the dock area. With the float out complete, the remainder of the shipbuilding process will take place in wet dock.

Silver Moon has the same design as fleetmate Silver Muse, which debuted in April 2017, though Silversea has announced a number of areas where the two will be different. The most high-profile change involves the addition of the Sea And Land Taste (S.A.L.T.) program on Silver Moon.

A culinary program designed to give passengers an immersive foodie experience, S.A.L.T. will include S.A.L.T. Kitchen, a standalone restaurant that will hold 160 diners; S.A.L.T. Bar, which will offer local cocktails, wines and spirits; and S.A.L.T. Lab, designed for workshops, lectures and demonstrations. Former Saveur magazine editor-in-chief Adam Sachs is charged with curating the program, announced earlier this year.

Silver Moon will be the ninth ship in the Silversea fleet. Lefebvre d'Ovidio said his father, who started the company, told his son before he died that he wished for a fleet of 12 ships. Silversea is closing in on that goal (which Lefebvre d'Ovidio amended to be "at least 12 ships") quickly; the company also will add an expedition ship, Silver Galapagos, to the fleet in 2020. Silver Dawn, in the same class as Muse and Moon, will debut in late 2021.