You may also like
Dismiss
Live From The 80s Cruise: Why A Music Theme Cruise is the Best Party at Sea
Just Back From The 80s Cruise: Talking Cruise With Rock Star Dee Snider
Just Back From a Jon Bon Jovi Cruise: 6 Things Fans Should Know
HRH The Duchess of Cornwall Officially Names Saga Cruises' Spirit of Discovery in Dover
Carnival Announces Carnival Panorama Entertainment, Gives Sneak Peek of Cruise Ship Shows
The Jane McDonald Interview: On Cruising, Touring and What Ship She'd Like to Sail on Next
Norwegian and Sixthman to Host Melissa Etheridge Cruise IV
Live From the Impractical Jokers Cruise: 7 Takeaways From Our Time Onboard
Sixthman Cancels All Remaining 2020 Theme Cruises and Festivals At Sea
First-Ever Emo's Not Dead Cruise Will Set Sail in November 2022 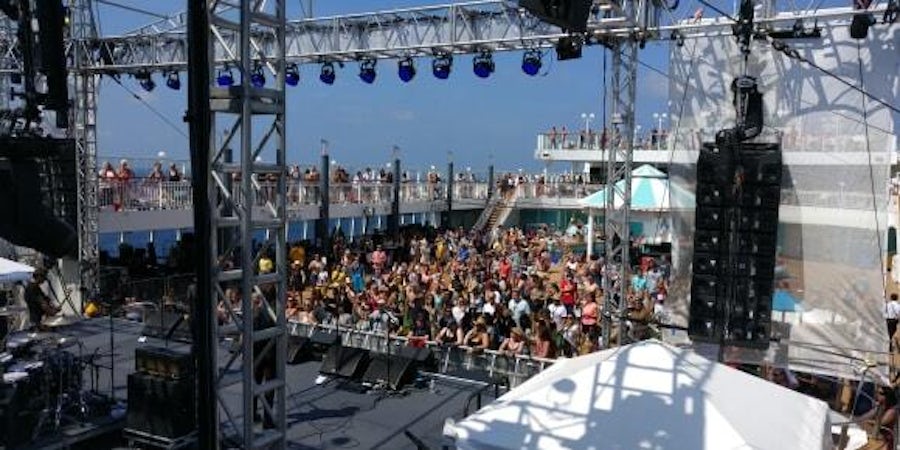 (2 p.m. BST) -- The crew member's hands are red raw. She's in the middle of welcoming more than 1,000 passengers onto Norwegian Pearl ahead of a four-day "Runaway to Paradise with Jon Bon Jovi" cruise -- and she's greeting each and every one with a high five.

Sailing round-trip from Barcelona to Palma, this is the second Runaway to Paradise with Jon Bon Jovi cruise organised by Sixthman, who put on music festivals at sea. The first sailed from Miami to the Bahamas in April 2019. The next four days will see passengers treated to more than 20 live gigs and acoustic sets, with the most anticipated events being two live shows by Jon Bon Jovi himself.

So grab your headband and guitar and come with us as we get onboard a cruise with Jon Bon Jovi.

The immersion begins with the music. And rather than bland muzak, a playlist of songs from Eye of the Tiger to We Built this City on Rock and Roll belts out in the ship’s corridors and you can barely walk more than 20 metres without coming across a live set from artists from Hannah Wicklund and The Steppin Stones to superstar Goo Goo Dolls frontman Johnny Rzeznik.

The support acts are great but of course, there's only one reason passengers are here and that is to see the man himself.

The gig takes place on the pool deck of Norwegian Pearl and it's a sea of hand-painted banners hoisted into the air and strung across rails from all over the world -- India, Russia, Italy and Finland -- and of course JBJ's home state -- New Jersey.

Jon played with his band Kings of Suburbia (that includes an electric violinist), and it was an eclectic set -- Jon called it a juke box set of his favourite songs including Pretty Woman -- much more soulful than a typical Bon Jovi set.

It lasted for an hour and a half, and the atmosphere was one of adoration. Couples had their arms around each other, groups of friends were singing at each other, there was the sense they would never have a moment like this again. There was even a young teen with an inflatable guitar pretending to play!

Bon Jovi himself certainly seemed to appreciate the setting during his live outdoor gig. "I've never played live to women in hot tubs before. I think I kind of like it," he said.

Even the bingo has a rock and roll twist to it. The bingo numbers are read out by the long haired, skinny jean-wearing musicians and singers from Collateral.

Then there’s the chef in Pearl’s speciality Teppanyaki restaurant, who uses his cooking utensils to bang out the riff to Living on a Prayer as he’s cooking live for his guests.

Activities have been scheduled that tap into lesser known areas of Bon Jovi’s life, too. For example, Jon’s son Jesse is onboard, organising wine tasting sessions of Hampton Water wine -- the brand Jesse oversees that includes light roses.

Of course, it’s not just the live bands, sets and shows that Sixthman has used to achieve the sense of musical immersion, as CEO Anthony Diaz explains the aim of Runaway to Paradise cruises is to "take passengers into Bon Jovi’s world."

And to that end, the ship has been turned into a Job Bon Jovi museum. Glass cases containing Bon Jovi’s costumes have been strategically spread out around the ship and his multi-selling records are displayed in frames on the walls.

Then there are the finishing touches that many guests return to their cabins to find at the end of their nights -- nights that might not end until 4 or 5 a.m. if passengers choose to visit the Shut up and Dance silent disco or check out the late night set by DJ Dave.

There’s the poster, signed by Bon Jovi, there’s the baseball cap with the Runaway to Paradise logo on; and there’s the fleecy cloud-soft blanket with the Runaway to Paradise logo stitched on that’s left in the cabin on the second to last night with a note that says ‘The choice between sleep and music can be a tough one. We hope this cosy blanket will help. Use it to catch up on a few Z’s when you’re back at home. Each time you do, we hope you remember your favourite vacation spent enjoying amazing music and many more memories with your fellow runaways."

Born to Be My Baby

Passengers have travelled to Spain from more than 53 countries to experience this cruise. The accents overheard in the lifts, bars and by the pool are American, Australian, German and South African, to name a few.

We caught up with a few of the fans, everyone of whom has their own unique reason for being here.

Penelope Martin, from Spain, has been a Bon Jovi fan since she was 12 years old. She has a band symbol tattooed onto her left arm and the initials BJ inked onto her wrist.

"When I was 12 my house didn’t feel like a home. Bon Jovi became my home. It was their lyrics, their attitude, just everything about them," she explained. They became my refuge."

She has attended 12 Bon Jovi concerts to date, but the Runaway To Paradise with Jon Bon Jovi cruise marks her first time on a cruise ship: "I’m loving it," she says. "This is my paradise. It's everything I could have imagined."

Carol Kappus, meanwhile, has only discovered Jon Bon Jovi in the past two months. Usually taking her holidays in the UK, she has travelled from Michigan, USA, for the Runaway to Paradise cruise.

“I was a singer of opera and classical music. I now play the harp. I recently got an electric harp and started playing around with an effects pedal. I went on YouTube to see how bands used the pedal and found Born to Be My Baby. After that I listened to everything and read every interview."

She adds: "It took a lot to persuade my husband to come with me."

Lay Your Hands on Me

This is the first cruise of its kind that Sixthman has run in Europe. CEO Diaz says he chose Norwegian Pearl for the sailing because the pool deck is the perfect size and shape to host a concert.

And due to inclement weather, Jon also played a wonderful acoustic set in the main theatre (pictured above) including such classics as "Wanted Dead or Alive" and "Bed of Roses". The audience thought it was wonderful. They were looking at him dreamily and soaking it all in.

There are plans in the pipeline to host more music cruises in 2020. A Blues cruise will take place in August on Norwegian Jade and plans for 'a couple more after' are on the Sixthman table.

If they’re anything like this one, they should rock the boat, too.