You may also like
Dismiss
Coronavirus: Updated Cruise Ship Policies and Cancellations Because of COVID-19 (2021)
Rolling Out the Deals: Why Now Might Be a Great Time to Book a Cruise
Live From Royal Caribbean's Odyssey of the Seas: Why You'll Never Be Bored on This Cruise Ship
"Cruising With…" Set to Return Next Year -- But Without Jane McDonald
Emerald Cruises Officially Launches in Australia
MSC Cruises Extends Seasons of MSC Virtuosa Cruise Ship in the UK, MSC Bellissima in Dubai
NCL Reveals More Dining, Design Details on New Cruise Ships Norwegian Prima and Norwegian Viva
Royal Caribbean Starts Construction On New Utopia Of The Seas Cruise Ship
A 'Thor: Love and Thunder' Cameo That Gets Cruise Fans Excited
Live from Grandeur of the Seas: The Beloved Lady G Cruise Ship Still Reigns 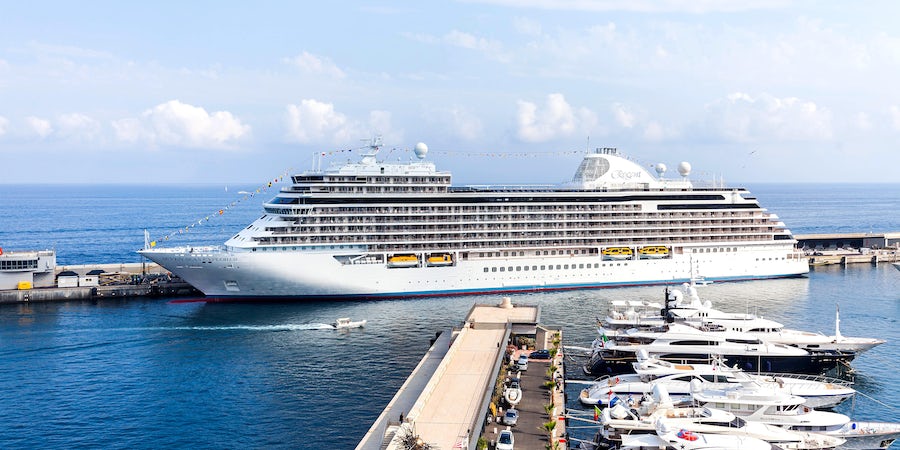 Just Back From: A Baltic Cruise on Seven Seas Explorer -- "The Most Expensive Ship in the World"

(11:55 a.m. BST) -- Seven Seas Explorer is currently the subject of a four-part Channel 5 documentary, "The Most Expensive Cruise Ship in the World".

The documentary takes place over two cruises around the Iberian Peninsula, the Bay of Biscay and Baltic Sea and gives an insight into how the crew maintains the standards passengers come to expect on Regent Seven Seas Cruises flagship vessel.

We were curious to get a peek ourselves -- and to see if the description of Seven Seas Explorer is justified -- so we hopped on a cruise around the Baltic to find out.

Our Concierge Suite was some way down the pecking order from the ship's fabled $10,000 a night Regent Suite -- and about one-tenth the size at 4,434 square feet -- but radiated luxury.

The walk-in wardrobe had enough hanging and drawer space for four months away and the marble-top bathroom, bigger than the kitchens in many new houses we've seen, had his and hers basins, L’Occitane toiletries replenished as soon as any were used, a bath tub and glass-enclosed rainshower.

We sank each night into a gorgeously-soft Elite Slumber bed that could be separated from the living area and balcony with a curtain; the balcony, with two chairs and a full-size table, added another 132 square feet to our cabin.

There were several other luxury touches such as a large TV with a great selection of built-in movies; an Illy Espresso maker and we loved that our fruit bowl was not just replenished daily but fruit left over from the day before was removed and replaced.

Everyone has their own idea of luxury. For us it is outstanding service and here Seven Seas Explorer shone. The crew were charming, happy and made time to stop for a chat. Entertainment staff at the door to welcome you to the theatre each evening was a nice touch, and we were impressed that the bar staff remembered our favourite lunchtime and evening drinks.

The food quality was faultless and the choice vast, whether you opt for a comfort meal such as a burger from the lunchtime pool bar or foie gras in French Chartreuse.

In the walk-up-and-dine Compass Rose you can have dishes from today's menu or choose from meats and sides to create your favourite meal. We had tasty pasta in Italian Sette Mari, loved the Peking duck salad in Pan Asian Pacific Rim but reserved highest praise for the 16oz rib-eye steak in Prime 7.

Regent led the way in offering free shore excursions, and being able to sign up for as many free excursions as we could physically do without clocking up a big bill was a wonderful touch, especially in St Petersburg, where there is lots to see but visitors can only go ashore on ship's tours unless they have a visa (exceptions include Hong Kong and Thai passport-holders). That does not give cruise lines much incentive to be competitive so even three-and-a-half-hour tours will cost $90 or more.

For example, we visited the fabled Hermitage, a vast museum-cum-palace with ornate gold rooms and priceless masterpieces; and the Faberge Museum, housing some of the exquisite eggs made by jeweller Carl Faberge for Russia’s last two tsars. We also took a Jewish Heritage tour and learned all about the events of 1917 on a revolutionary excursion in the city.

After all those (and another two paid-for ones, see below) we had a day of rest in Helsinki, but were back on the free tour trail at the last three ports -- a Jewish Heritage excursion in the Latvian capital of Riga, a trip to an amber museum in Palanga from Klaipeda in Lithuania and a sights/beer combo with guide Dieter in Rostock, Germany.

It is worth noting however that Regent talks a lot about its free excursions but quite a few have a price tag. These are mostly premium outings -- we took our St Petersburg tour tally to six by splashing out on an evening at the Russian ballet and a private concert in Menshikov’s Palace -- but several free excursions now have a for-fee small group option (maximum 16 people). They are usually an extra $19 or $29 but we spotted a small group Grand Imperial Evening at the Catherine Palace for an extra $229, on top of the $199 per person cost.

Was it worth paying for tours? For our two evenings, for sure. The ballet was superb and the concert most enjoyable. They cost $149 and $19 respectively.

Quite simply, Seven Seas Explorer oozes grandeur. You can see the dollar bills adding up with all the chandeliers, the acres of marble, the leather flooring. In the Regent suite, the cost of the bed and custom-built Steinway piano alone was an eye-watering $400,000. Go to dinner in the Pacific Rim Restaurant and you pass a bronze prayer wheel that cost a cool $500,000.

Showy? For sure, but that's what makes it the most expensive ship at sea.

• "The Most Expensive Ship in the World" airs this Friday, August 30th, then September 6th and September 13th at 9 p.m. on Channel 5.