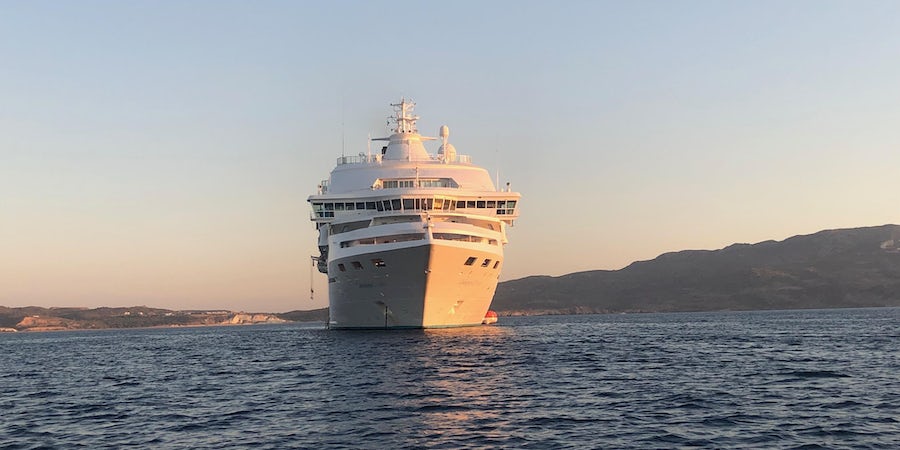 Just Back From Celestyal Crystal: Changes On A Greece-Focused Ship

Last summer, the U.K.'s most famous cruise ambassador, Jane McDonald, hopped onboard Celestyal Cruises' Celestyal Crystal for a 7-night cruise around the Greek islands in the sixth series of the hit Channel 5 series "Cruising with Jane McDonald".

During the cruise, which calls in at Mykonos, Milos, Santorini, Crete and Kusadasi (Turkey), Jane visits ancient ruins, samples local food and drink, learns to Greek dance -- and goes clubbing in Mykonos, where the ship overnights.

We were keen to get back on the ship for a couple of reasons -- to find out why Jane liked it so much (it's her second time on Celestyal Crystal; she first sailed it round Cuba in 2017 in Series 2 of "Cruising With Jane McDonald").

And also because the we last sailed Celestyal Crystal in August 2018, and since then the line has made a few significant tweaks to its offering -- we wanted to see how those changes had bedded in -- and to take a look ahead at new destinations.

This year Celestyal went almost all-inclusive, adding drinks, tips and three shore excursions in the basic fare. The “premium drinks package” that was seen in 2018 is no more; if you want upscale Champagne and cognac, you just pay per drink.

This means that you are not constantly signing for things, and dreading that final bill. It makes for a much more convivial atmosphere.

What makes this all-inclusive offering impressive is that Celestyal is not a luxury line. Seven-night cruises on Celestyal Crystal start from as little as £829 per person (less thhan $1,000), so there’s a lot of value for money.

It's also worth adding at this point that service levels are also akin to a much more lux line. Perhaps it's the size of the ship, or crew loyalty, but it feels like coming home when we step onboard.

This August trip marked our third sailing with Celestyal Crystal. The first came back in 2014 when the ship was on loan to Cuba Cruise, offering full circumnavigations of the Caribbean island.

The Canada-based line offered an excellent steak restaurant onboard, but since rebranding under the Celestyal colours and repositioning back to the Greek islands, there has been no alternative dining option available.

As good as the food might be onboard Celestyal Crystal (and we have noticed a sharp rise in quality over the past two years), it is always nice to have dining options outside of the main dining rooms and buffet.

Which is why the Fish Tavern (36.95 euros pp) is to be welcomed. The tiny venue (with just 12 covers, pictured above), offers market fresh fish every day in an intimate setting. And when we write "market fresh," we mean it -- the ship picks up the catch of the day every other day of the cruise.

The price is arguably a little steep, but you do get a starter, a soup or salad, a main and a dessert, plus the portions are huge -- you're served the whole fish, not just a fillet. You could end up paying that cover charge for a whole sea bream in many land-based restaurants.

It's Had a Refresh -- And a Few Welcome Tweaks

We're fond of this ship, but there's only so much you can do with an old vessel. The line has done a good job with refurbishing the Junior Balcony Suites, however, giving them a light color palette, new fabrics and furniture and new carpets.

We like the "soft" stuff, too -- perks such as priority tender service, front row seats in the theater, dedicated butlers/concierge, a bottle of sparkling wine on arrival, as well as daily delivery of fruit; canapes before dinner and petit fours after dinner and complimentary room service.

Regular cruisers will also find this year that the Deck 8 aft area -- which was mainly used as a sun deck -- turned into an overflow for the Amalthia buffet, with tables and chairs set up. Next year, we understand, the line will go further and install a fixed covered area (as on sister ship Olympia). This will hopefully then free up the pool area from diners and give it over to what it should be -- for sun loungers.

We also welcome the fact that the Sports Bar has made a return, adding another venue for a drink and a chance to watch a game (this room was previously given over to a second casino area). Also, smoking inside the existing casino has been banned.

We Love the Overnights

Celestyal introduced overnights in Santorini and Mykonos a couple of years ago, and what an inspired move it was. The beauty of spending the nights in both these islands is you get to understand what the islands are all about.

It really struck us when in Santorini at around 5 p.m. all the other ships that had been docked there that day began to sail off and we were left, alone in the caldera with the sun setting spectacularly behind the volcano.

But it was the next morning, when we got up around 8:30 a.m. and headed by tender into Fira -- horribly overcrowded by day (and not just by cruise ships, we hasten to add), but blissfully quiet at 9 a.m.

And although we didn't go partying till dawn in Mykonos, we love the fact that the last shuttle to the ship is 6 a.m. for the die hard partygoers!

Celestyal Has Extended the Season -- And its Itineraries

This year the line will sail the Aegean Sea and the Greek Isles until the end of November. Then it debuts a new itinerary called "Three Continents", which it will run through February 2020.

This fascinating Eastern Mediterranean itinerary departs Piraeus and calls in at Alexandria and Port Said, Egypt; Ashdod in Israel, which is often only available as part of a much longer world cruise; and the underused cruise destination port of Limassol, in Cyprus.

According to Celestyal, Limassol is understandably thrilled about getting an additional regular service (on top of Marella's). Getting Egypt back onto ocean cruise itineraries is an exciting move.

And unlike most other cruise lines, Celestyal never pulled out of Turkey, continuing to call at Kusadasi (for Ephesus). And now it leads the way with a return to Istanbul in October.

Celestyal may only have two relatively small ships in the fleet, but we're constantly impressed how they respond to customer feedback and make these relatively small but significant changes.

What it means, of course, is because it keeps making improvements, it means it's a ship that you can sail on again and again, and never get bored -- which is why we keep coming back.

We're not surprised Jane McDonald has chosen to sail twice on Celestyal Crystal -- it's hard not to be drawn back again and again.