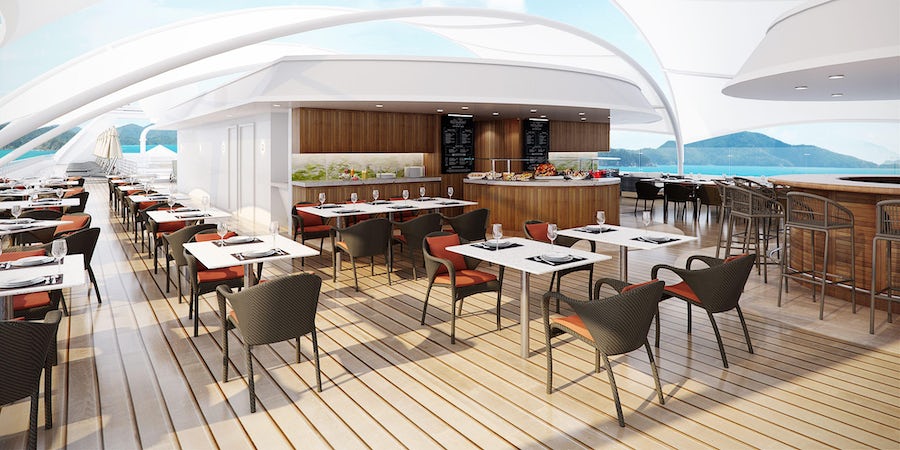 Dubbed "The Star Grill by Steven Raichlen," the new venue is part of Windstar's $250 million Star Plus initiative, which will stretch, re-engine and substantially modernize all three ships over the next year.

Designed to be a modern, casual alfresco restaurant, The Star Grill by Steven Raichlen will focus on grilled, smoked and rotisserie fare, including seafood, meats and vegetable dishes paired with craft side dishes and sauces.

"We're delighted to be working hand-in-hand with someone of Steven's culinary caliber," Windstar President John Delaney said in a statement. "Our new partnership is a wonderful alliance that will provide our guests with an inviting new place to dine that is entirely suited to Windstar's casually elegant style of cruising."

Raichlen is the author of 31 books, and he's credited with reinventing modern barbecue cuisine. He was inducted into the Barbecue Hall of Fame in 2015, and his books have won multiple James Beard Awards and IACP Julia Child Awards.

Located on the upper deck of Star Breeze, Star Legend and Star Pride, the new eatery will open for lunch and dinner, featuring menu items such as Danish smoked shrimp, lemongrass pork skewers and Hill Country brisket. On sea days, passengers can enjoy a mid-morning Fruhschoppen with artisanal grilled sausage and pretzel rolls.

The Star Grill by Steven Raichlen will feature on-deck seating for 95 people, two carving stations and a prime location just steps away from the popular Star Bar, which offers ocean views.

Meals can be paired with a selection of local and regional beers, along with tasting flights. Windstar will also roll out a special cocktail menu for the new dining venue, designed to reflect the casual nature of the cuisine and the outdoor dining space. Passengers can expect cocktails like Strawberry Pimm's, Pineapple & Coconut Slushy, Raspberry & Melon Slushy, and Strawberry + Basil Smash -- all served from the Star Bar.

Raichlen will also host one culinary-themed voyage each year with Windstar Cruises; he will lead lectures and grilling demonstrations while socializing with cruisers onboard the ship.

On the new venture with Windstar, Raichlen says, "I've spent my life traveling the world's barbecue trail to bring my readers and viewers the ultimate in global grilling. What better way to share my discoveries than on a Windstar cruise ship bound for new adventures."

In June, the line announced it would partner with Michelin-Starred chef Anthony Sasso to add Cuadro44 -- a Spanish coastal eatery -- to its trio of Star-class ships.