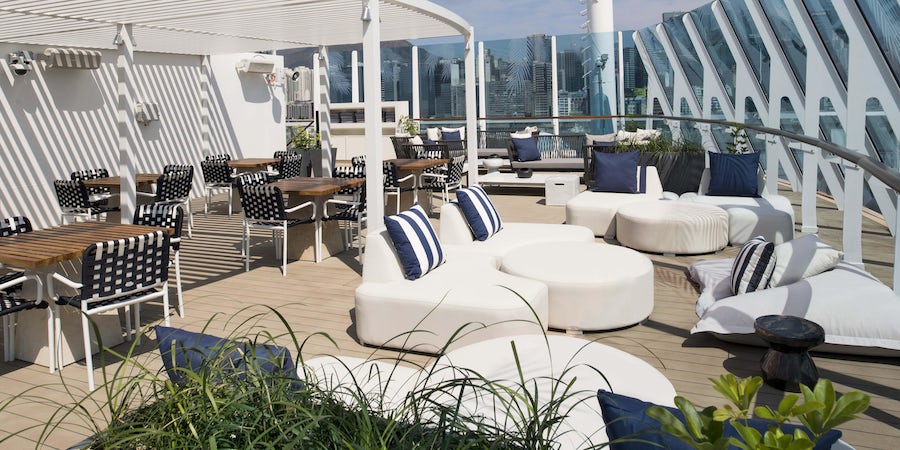 When Celebrity Millennium returned to service this past February, it was the first ship in the Celebrity Cruises fleet to show off the line's Revolution refurbishment program, which will touch every Millennium- and Solstice-class ship over the next several years.

Cruise Critic is aboard Celebrity Millennium for a one-week Alaska cruise to see the refurbished ship. The sailing is also to be one of just two American Ballet Theatre cruises the ship will host in 2019 – part of a partnership with the acclaimed company that the line rolled out this year.

Here are a few of our favorite spaces post-Revolution refurb, as well as some thoughts about  the ABT shows.

Several spaces on Celebrity Millennium were touched during the 35-day refurb, including all the cabins. Rooms (both standard and suites) now feature a neutral color scheme of beiges, creams and grays that comes across as elegantly modern and giving them an airier feel. There's also more storage than previously; we particularly love the four glass-fronted cabinets that give the rooms a touch of class you won't normally find outside of suites.

More importantly, however, the rooms have joined the 21st century; in addition to the 110- and 210-volt outlets by the desk, there are two USB ports at the desk and bedside lamps with 110 outlets and USB ports built into the stand.

The suites were also updated, with a similar feel to the designs. As one might expect they're lovely, as is The Retreat Lounge, which is placed where Michael's Club used to be., The most impressive suite-related update onboard Millennium, however, is The Retreat Sundeck. A bi-level space at the very front of the ship on Deck 12, overlooking the helipad, The Retreat Sundeck is a private oasis of quiet with comfy seating of all types -- plush loungers, clamshells, day beds, oversized pillows for lying about on the deck and sectional sofas.

There's no pool, but there is an oversized hot tub (with wheelchair assistance technology). There's plenty of sunshine but also shade if that's what you're looking for, plus it's a great spot for sailaways and scenic cruising (such as glacier sail-bys in Alaska).

Everyone will appreciate the changes in the Oceanview Cafe, Millennium's buffet restaurant, which was given an open layout and additional seating. In truth, we're surprised it took so long to go to an open layout, something all new cruise ships are now built with and most lines are retrofitting for. The stations provide more space for cruisers to move around in and cut down on lines, making the entire buffet experience much more pleasant.

The extra seating, which comes primarily in the form of bar-style counters with stools along some of the windows gives cruisers more choices of where to sit, and gives those who want a more express-style of seating the perfect option, plus they've got the best views.

One change we'd like to call out is in the Metropolitan main dining room, which was also totally transformed during the refurb. The restaurant boasts the same neutral color scheme you'll find in all the refurbished spaces, but we're most impressed with a subtle touch you'd be hard pressed to notice if you didn't know about. All the windows have been given a slight blue tint that prevents the gloominess of a grey or rainy day from permeating the dining room. Chances are you'll never notice the blue tint, but what you will sense -- on an unconscious level -- is that the room is bright and airy and, ultimately, welcoming and comfortable.

Announced in February, Celebrity’s partnership with ABT brings performances, barre classes and seminars by company dancers to 12 sailings in 2019 and six in 2020, spread out among all ships in the fleet except Celebrity Edge.

For this special sailing of Millennium, two of ABT's principal soloist dancers are onboard (a woman and a man). They offered a ballet barre class for up to 50 participants (anyone over the first 50 who showed up were welcome to stay and watch as the class was held on the stage in the theater), have participated in a Q&A and have performed twice.

The performance each time has been the same -- four pieces (one long, three short) from Swan Lake and a modern-style ballet -- but were on separate days, with one at 7 p.m. and the other at 9 p.m. to accommodate cruisers with early and late dinner seatings.

To say the theater has been packed would be an understatement. We spotted less than a handful of empty seats at the 9 p.m. show we attended and all of these were in the highest balcony and all the way to the sides where sightlines aren't the best. The audience was enthusiastic, clapping whenever the ballerina did something difficult (though only about half the audience offered a standing ovation).

The performance was magnificent but short, perhaps less than 30 minutes all total. The Swan Lake segment was separated from the modern piece by an electronic violinist who performed a combination of classic and modern music. One of our traveling companions commented he thought the show should have been longer and the violinist kept out (not everyone in our party agreed.,

What was clear was that the ABT performances were a real draw, with bigger audiences than any other show we've attended. Judging by this reception, the line could do more sailings with ABT dancers onboard and get a good response from the cruisers.