You may also like
Dismiss
Just Back From Viking Jupiter: 8 Great Touches on Viking Ocean Cruises’ Newest Ship
Just Back From Adventures By Disney: A Family-Friendly Danube River Cruise
Live From Travelmarvel: Cruising On A Budget-Friendly, Australian-Centric River Cruise
Just back from Oceania Riviera: Why Oceania Cruises Is Tops For Foodies
Just Back From: A Baltic Cruise on Seven Seas Explorer -- "The Most Expensive Ship in the World"
Just Back From Greece: An Island-Hopping Cruise Aboard Azamara Pursuit
Live From: A Culinary Cruise Onboard Genting Dream
Just Back From Hanseatic Inspiration: First Impressions of a Luxury Expedition Ship
Our Favorite Cruise Travel Memories
Cruise Lines Alter Russia Itineraries, Provide Aid Due to Ukraine Conflict 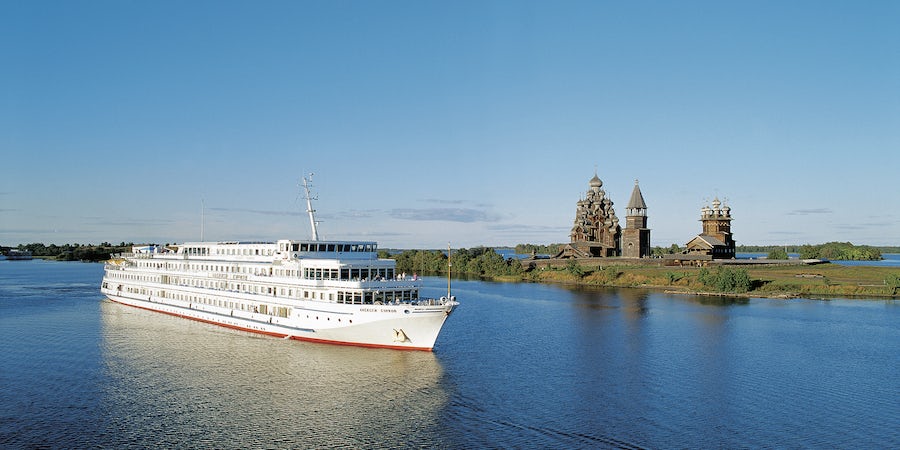 Live From Viking Akun: A Russian River Cruise From Moscow to St. Petersburg

(5:20 p.m. BST) -- Russia is a destination that intrigues the adventurous traveller, but should definitely be on everyone’s river cruise hit-list for its history and culture, meandering waterways, stately palaces and world-class ballet performances.

The sheer size of the country means you need to choose your itinerary wisely. The most popular route is from Moscow to St Petersburg, the route we are taking on Viking River Cruises' Viking Akun.

Viking Cruises was born in Russia, and is the only western-owned fleet in the land. Viking Akun is one of five vessels currently operated in Russia. The name Akun is derived from the nephew of Viking ruler Rurik, who was among the signatories of the 944 Rus-Byzantine Treaty, named in the Russian Primary Chronicle.

The 204-passenger ship is sleek, modern and comfortable, having been refurbished in 2014 in line with the Scandi-chic inspired style of the company’s European vessels. There’s a promenade deck and the public spaces feature panoramic windows that make the most of the views.

Sailing the Volga, Svir and Neva Rivers from Moscow to St Petersburg, our itinerary, Waterways of the Tsars, enables passengers to experience the real Russia in contemporary comfort.

Here are some of our thoughts from a Viking River Cruise on the Volga River.

The Proportions Are Generous

If you like the design of Viking’s ocean ships, you’ll feel right at home. Cabins are stylish, spacious and decorated in calming taupes and beech woods. This spaciousness extends to the ship’s public spaces -- it feels airy and roomy wherever you are.

Ever heard the expression, ‘a place for everything and everything in its place?’ This couldn’t be more apt in our well-planned, 225 square foot veranda stateroom. There’s good storage, especially in the bathroom (the lower shelf is very handy), crisp cotton sheets, good sized toiletries, an easy to use safe, high-quality fixtures and fittings, including a Grohe shower, and complimentary water and fruit daily. The veranda is generously sized for a river ship -- bigger than some ocean ships we’ve been on -- but the bed is adjacent to, not in front of the window. We like the attention to detail: for example, it’s great to have plug sockets by the bed so you can charge devices overnight, and bottled water in glass bottles.

The food onboard is generally of a high standard. For breakfast, the most popular choice seems to be the Neva Restaurant which offers a buffet as well as a la carte menu items. When we walked into the Panorama Bar buffet on the first morning, it was empty; dropping by a couple of hours later for a coffee however, it was packed. There’s lots of fruit and tempting pastries, however there is no fruit juice on the buffet (you need to ask for it) and the weak orange juice is a let down. The Viking Bircher Museli on the other hand is delicious.

Lunch is taken in the Restaurant, which offers a buffet or items off the menu, including always available options. If you prefer a lighter option, sandwiches and salads are served daily in the Panorama bar. Dinner features always available classics and a regional specialties tasting menu, plus a small a la carte menu. On the first evening we tucked into salmon Gravlax with dill sour cream, potato salad and a honey mustard dressing, followed by a Thai green vegetable curry. The daily wine list includes Sommelier’s Recommendations and an included selection. For those in-between meals moments, cookies and pastries are available at the help yourself tea and coffee station, which by the way, also serves good hot chocolate.

Our fellow sail mates include Americans, Europeans and Brits. Somewhat surprisingly for a river cruise the passengers are quite mixed; retirees mingle with younger groups and mixed generational families sailing together. Our neighbour picked the itinerary because her grandparents were Russian; another couple because it was on their bucket list. It’s a relaxed but very friendly atmosphere.

When not ashore, passengers tend to make the most of the comfy seating dotted around the ship to read and get online. There’s not much to do of an evening aside from drinks, live music and the occasional quiz, but most don’t mind as there’s lots to partake in during the day. And thankfully there’s a lift as some people might find the stairs inside and up to the top deck quite steep and narrow.

From historical onion domed churches to visiting a traditional Russian home, the itinerary ticks off the must-see landmarks with some original experiences thrown in. Viking offers one included excursion in each port of call plus optional paid for excursions.

The guides are excellent -- not only are they very knowledgeable, they also have personality. After a busy afternoon in Moscow, every single person in our group decided to stay out and watch a traditional folklore performance instead of returning to the ship. The performance was rousing and uplifting and the musicians first-class; they received a standing ovation at the end.

A warning: Moscow traffic can be pretty bad, and it took over an hour to get back to the ship following the concert, meaning many people were still eating dinner at 10:30 p.m. Viking did however, provide snack packs to keep everyone’s hunger pangs at bay, which were devoured on the coach before the concert.

One morning we were whisked to the Kremlin before it opened to avoid the crowds; this gave us the opportunity to view the impressive Armory, including some magnificent imperial carriages, thrones used by Peter the Great and Ivan the Terrible, and a collection of Faberge eggs, in relative comfort before it got too crowded. A home visit and afternoon tea in Uglich was an unforgettable experience and a real insight into how a local Russian family lives.

Even an unseasonal spell of grey, cool weather is unlikely to spoil this fascinating cruise. It’s a bonus to have a few days in the cities of Moscow and St Petersburg and there’s a good balance of city exploration, onboard enrichment with talks and presentations -- and not forgetting sailing time, too.

Service onboard the ship is friendly and attentive, although we feel that the serving of drinks at lunch and dinner can sometimes be a little slow. We’d also like to see Viking ditch the plastic straws.