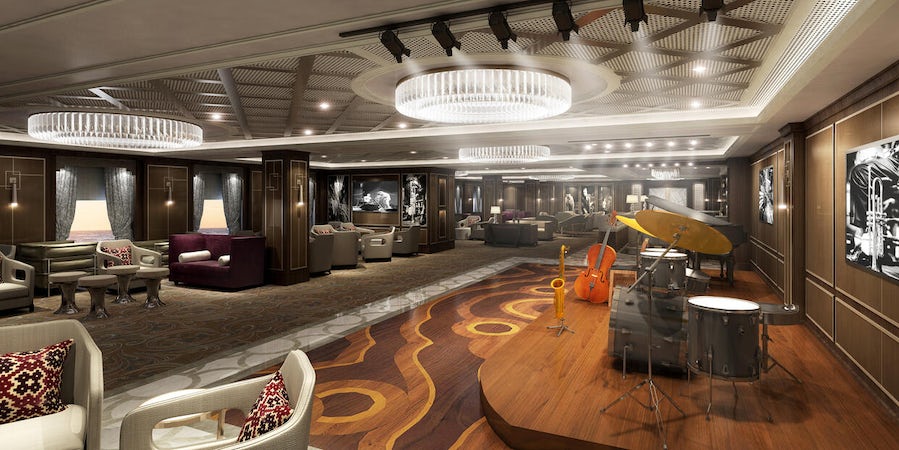 Artist rendering of Take 5, which will be debuting on Sky Princess in October 2019 (Image: Princess Cruises)

Artist rendering of Take 5, which will be debuting on Sky Princess in October 2019 (Image: Princess Cruises)

Theme nights will also be regular occurrences onboard: A Night in Harlem, The Birth of Big Band and BeBop and Toda La Noche – Fiery Afro-Cuban Jazz are all on the schedule. Other planned theme nights include a celebration of the women of jazz throughout history and a contemporary Festival of Jazz, where local musicians from the ships' various ports of call will be highlighted.

In addition to its lounge seating and live jazz entertainment onstage, Take 5 includes a bar; drinks can be ordered to the theater via OceanMedallion, Princess Cruises' multi-use device that works in conjunction with a smartphone or tablet.

Sky Princess – the first ship to have Take 5 onboard – will debut in the Mediterranean and Caribbean in October 2019. Enchanted Princess will debut in Europe in June 2020 with the second Take 5. Both ships can accommodate 3,660 passengers, and are the line's fourth and fifth Royal-class ships to launch, respectively. (A sixth, yet-unnamed Royal-class ship is slated to launch in 2022.)