You may also like
Dismiss
2019 Atlantic Hurricane Season Outlook: What Cruisers Need to Know
Coronavirus: Updated Cruise Ship Policies and Cancellations Because of COVID-19 (2021)
Can a River Cruise Still be Fun in the Age of Covid-19?
"Cruising With…" Set to Return Next Year -- But Without Jane McDonald
Royal Caribbean's Odyssey of The Seas Cruise Ship Officially Christened
MSC Cruises Extends Seasons of MSC Virtuosa Cruise Ship in the UK, MSC Bellissima in Dubai
NCL Reveals More Dining, Design Details on New Cruise Ships Norwegian Prima and Norwegian Viva
Royal Caribbean Starts Construction On New Utopia Of The Seas Cruise Ship
A 'Thor: Love and Thunder' Cameo That Gets Cruise Fans Excited
Live from Grandeur of the Seas: The Beloved Lady G Cruise Ship Still Reigns 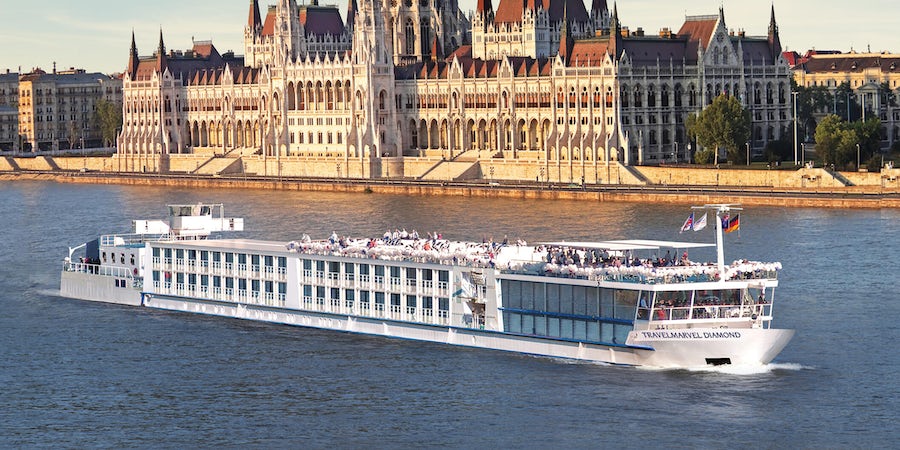 Live From Travelmarvel: Cruising On A Budget-Friendly, Australian-Centric River Cruise

Travelmarvel, as the name suggests, is a marvellous choice, particularly for Australians who like to travel with other Aussies (and don’t mind a few Brits). It’s river cruising without the bells, whistles, butlers and booze all day, appealing to people who would rather save the extra money or spend it on a longer holiday in Europe. Indeed, most people on our 14-night ‘European Gems’ itinerary, from Amsterdam to Budapest, tagged on a rail or road trip before or after the cruise.

Travelmarvel Diamond still has all the essentials – a comfortable ship, included daily tours, an exceptional crew, lots of food and free wine, beer and soft drinks with meals. The itinerary, views and service are just as good as higher priced competitors, which gives guests the sense they’ve discovered the best value on Europe’s rivers. Here’s why they’re probably right.

Little Treats Along The Way.

Don’t think that because it’s cheaper you’ll lack extras or special attention. Top-of-the-range QuietVox listening devices are used for tours, chocolates are placed on your pillow at bedtime, and this year the line introduced new entertainers, stretch classes and fitness walks in port.

The crew are not only professional but have a great sense of humour, from the bubbly cruise director Sue to the efficient bartenders Alex and Jenny, and fun waiters such as Bob, Marko and Lucian. Then there’s all the times they go above the call of duty, such as fetching a bowl of ice for a passenger whose feet had swelled up after a long day of walking.

Our cruise coincided with the hottest day on record in Germany – 41 degrees. Although the air-conditioning kept working, it was pushed to its limits, so additional fans were ordered for every cabin. About 80 of these powerful tower fans were delivered overnight to the little medieval village of Rudesheim, appearing in our cabins on 25 July (like getting presents on Christmas in July!). That’s five-star service for a four-star fare.

Another standout was the exclusive Travelmarvel activity in Miltenberg, where we were divided into small groups (6 to 12 people) and sent to various houses to have coffee and cake with local families. It was lovely to be invited into their homes to learn about German life, while they got to practice their English.

Dining Is Delicious And Plentiful.

Every morning starts with a smiling chef, Gede from Bali, cooking omelettes to order. Next to him is a bottle of bubbles on ice (if you feel like a Champagne breakfast, help yourself to a glass). The buffet is stocked with the usual hot and cold foods, from pancakes and bacon to smoked salmon and sweet pastries. Then there’s another buffet for lunch, plus main courses that you order from the waiters, followed by freshly baked cakes for afternoon tea. Dinner is four courses (entrée, soup, main and dessert, with two choices of each), plus you can help yourself to cheese and fruit. For a lighter, quieter option, Travelmarvel has introduced a self-serve dinner in the lounge, offering a smaller selection of the dishes on the restaurant menu. And if you’re still hungry, late-night snacks are available in the lounge at 10.30pm. On top of this regular routine are special events such as Oktoberfest and Fruhschopppen, a Bavarian brunch of beer, sausages and pretzels.

The Ship Is Classic, Not Luxury.

Built in 2007, the vessel was refurbished in 2018 so it’s in great condition. The décor blends warm browns, faux wood, navy carpets and plain, comfy furniture. To some people it may look old-fashioned but the older clientele seems to prefer it to other cruise lines’ modern, white, shiny style.

A minor drawback is the partially obstructed views from the lounge and restaurant. Instead of wraparound, floor-to-ceiling glass found on luxury ships, Travelmarvel Diamond’s separated windows and curtains sometimes get in the way, but again these laidback travellers don’t seem too bothered.

Most of the 81 cabins are 16 square metres and have a French balcony (two sliding glass doors that open halfway), except for the seven window-only staterooms on the lowest deck. There’s not much space to squeeze between the bed and the chair; however, there’s ample storage and a compact bathroom with a walk-in shower. The TV is tiny but the Wi-Fi is pretty good. Four larger Owners Suites are 24 square metres and sell out quickly. Passengers don’t spend much time in their rooms, preferring to relax on the sun deck, in the lounge or the shaded outdoor deck at the bow.

Only one complimentary shore excursion per day is offered in port cities and villages: a walking tour or bus trip to an attraction such as a palace. There are no bike tours, but you can borrow one of the ship’s bicycles for a self-guided ride. The fitness room is poorly equipped, with few other exercise options. There is no pool, no elevator and no spa for massages. The entertainment is a British duo, Matt and Sarah, with guest entertainers on three out of 14 nights. No enrichment lectures are held, except for a glassblower selling his baubles. But everyone seems content with what’s on offer. The general thinking is you get what you pay for and you don’t need anything else. If anything, Travelmarvel over-delivers.

Due to low water levels on the upper Danube, passengers have to switch ships tomorrow and take a four-hour coach trip from Nuremberg to Engellhartszell, Austria, where the identical Travelmarvel Jewel awaits. Each person will be given 25 euros cash for lunch to spend as they wish at a local café or beer hall, and they’ll check into the same number cabin on the next ship.

Despite the inconvenience of packing up halfway and unpacking again, everyone is taking it in their stride. Some people are even looking forward to the scenic drive, while others are pleased to get twice the celebrations, with welcome and farewell festivities held on both ships.

There’s no doubt that this positive attitude is thanks to the happy, family-feeling atmosphere created by Sue and the crew this week. And it probably doesn’t hurt that almost everyone onboard is an easygoing Aussie who’s used to long drives.

Next year, the line will replace Travelmarvel Sapphire with a newly built, yet-to-be-named ship.