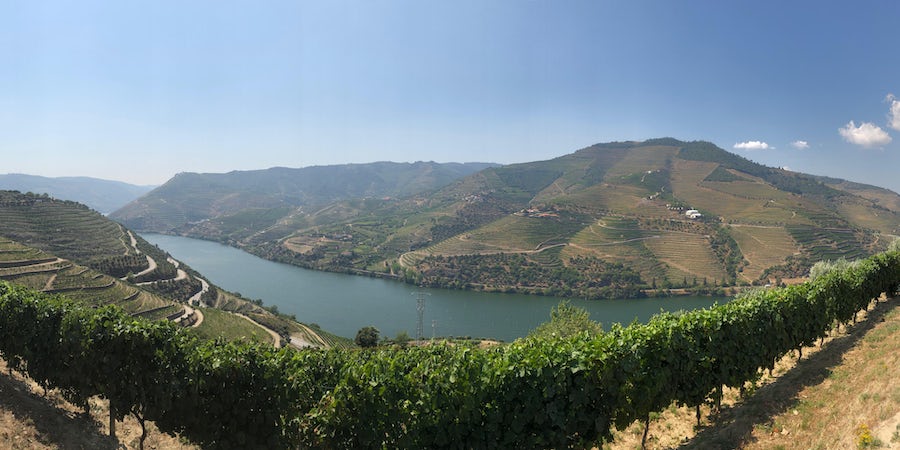 Just Back From Portugal’s Douro River: Cruising On A New Viking River Ship

Portugal continues to grow as a river cruise destination, with Viking River Cruises adding a fourth ship, Viking Helgrim, on the Douro River this year.

The vessel is the line's fourth "baby Longship", so called because it’s roughly half the size of Viking’s signature “Longships,” carrying only 106 passengers (as opposed to the 190 that the line’s ships usually have on other European rivers). The smaller size allows Viking Helgrim to get through the narrower locks along the Douro, but it also means there is less public space -- no shuffleboard or mini-golf, for example (yet there is a much-needed pool).

We sailed on Viking Helgrim last week, checking out the ship, the excursions and the Douro itinerary. Here are 5 things we loved:

Anyone who has been on a Viking Longship -- and there were many passengers onboard who had, as this is usually a third or fourth river cruise for many people-- will immediately recognize popular Viking River Cruise features: The Aquavit Terrace, where you can sit outside at the front of the ship (in a departure, no meals are served here, however); the Restaurant, flooded with light; and the Viking Lounge, complete with baby grand piano and a tiny library. It’s all scaled down to fit the Portuguese locks.

The décor is also the same: black and white photos on the walls, light Scandinavian woods and plenty of light. As a 2019 build, Viking Helgrim has modern essentials such as USB sockets by the beds above the desk, as well as plenty of sockets (for different plug types) dotted around the cabin.

We also love the shower rooms -- all wooden floors throughout, including in the shower itself; own brand Frejya products rather than generic dispensers and Hans Grohe showers.

But the best aspect of the ship? Viking has installed a small pool on the sun deck, a change from the Longships.  While it's less than two feet deep, it’s a great place to cool off in the scorching Portuguese summer and has a strong jet on one end so you can swim against it for exercise.

The food, overseen by Hungarian-born and Swiss-trained chef, Peter, was outstanding. All river cruise lines offer local specials, but Peter really emphasized this, taking time at the nightly port talk to explain what was in season (there was always a Chef's Recommendation section on the menu every night – and it was ALWAYS the best). Ingredients were sourced hyperlocal, often from the village we were visiting that day.

Sample Portugese dishese were grilled sardines on toast; "Pichanha com Esmagado" -- a steak marinated for 48 hours and cooked for four; Piri Piri chicken; seared rack of lamb and – on the day of our excursion to Salamanca, in Spain -- gambas al ajillo (prawns in garlic). And as for the desserts, every night there was a delicious local speciality and Peter even gave a demo on how to make the Portuguese classic Pastel de Nata.

It's also worth mentioning that the always-available selection -- rib eye steak, the Norwegian salmon and roast chicken -- was also delicious, particularly the steak.

Viking has carefully curated their excursion options on the Douro River.  Not surprisingly, there is a strong emphasis on port wine. The fortified wine is made at "quintas" (wineries), both in Porto, where port is used for cocktails, and around almost every bend of the Douro.

But the standout excursion was not to a vineyard, but one billed simply as "Marialva Castle & Picnic.” Capped at 12 people, the excursion began with a short bus ride to a tiny town,  where we then all hopped onto an open-back truck and trundled through the village's tiny streets and nearby fields to a clearing in olive groves. There, we found a table groaning with food -- salads, cold meats, pasta and fresh-made local bread – as well as limited edition wine from a local vineyard.

Our hosts were Carmen and Paolo, the proprietors of the nearby hotel Casas do Coro. They served us a delicious feast, followed by a slightly tipsy truck ride to the hotel (with music blaring from the speakers) and a lazy afternoon by the pool (although you could visit the  ruined castle, if you wished). We returned to the ship 90 minutes late -- which speaks volumes about how special this was.

One issue on the Douro is that you do need to expect coach journeys, often 45 minutes or longer (Salamanca was two hours away.) It means you are off the ship an awful lot (often all day) and so you miss one of the loveliest aspects of this cruise -- just sailing along the river. But to be fair, the coach journeys can be lovely too, just staring out the window at the endless olive groves and vineyards.

We use the word "intuitive" when describing great service, and that’s exactly what we found on Viking Helgrim. The service was at an extraordinarily high standard, from the cabin steward Attila; to our waiters -- Abdul and Milan; to the Captain, Luis; the Program Director Sam, Hotel Manager David and Maitre D' Manuel.

On the first night, the A/C was down very low and we were clearly uncomfortable (though being British, did not complain).  Manuel spotted this and turned up the air for us.

At the same meal, he spotted we were on the "Silver Spirits" beverage package and instead of serving us the standard wine, immediately brought over the wine menu for us to choose.

It followed from there. Peter knew our omelet preference after day one; Manuel cracked open a bottle of Veuve Clicquot because he said we could do better than the house bubbles; Abdul put aside fresh mint for tea every evening; David and Sam gave us tips on where to go for a run; Sam suggested spots to go for a drink and which excursions to do; David gave us a bowl of olives because he noticed we liked them.

Leaving a cruise is always a wrench, but this was particularly hard and we will miss them -- and their smiles and infectious enthusiasm.

The full "cruise" can begin in Madrid or Lisbon, with a transfer to Porto, where the ship is overnight for two nights. Porto is utterly gorgeous, spanned by numerous vertiginous bridges, including the famed Dom Luis 1 bridge (the longest of its kind in the world);  steep streets with doorways leading into tiny restaurants; a cable car and rickety old trams as well as a number of world-class monuments. The whole city center has been declared a UNESCO World Heritage Site.

The biggest draw, though, is the bookshop which inspired J.K. Rowling (she lived here for some time, teaching English), Livraria Lello. The only problem is you have to stand in line for at least and hour and a half to get in!

While Porto is buzzy and lively, with lots of bars by the river and summer street parties; it all changes a few miles inland. The Douro River is a total contrast to the Rhine and Danube rivers -- there’s no industry, no roads, no cycle paths. Instead you'll see wild and wooded banks with houses falling to the water and little marinas at the bottom; miles and miles of forested hills, the odd farmhouse, steep vineyards and very few towns, just occasionally the cute train track that hugs sections of the river. The only sound you hear are crickets and birds.

It’s utterly idyllic – and Viking Helgrim is the perfect way to see it.