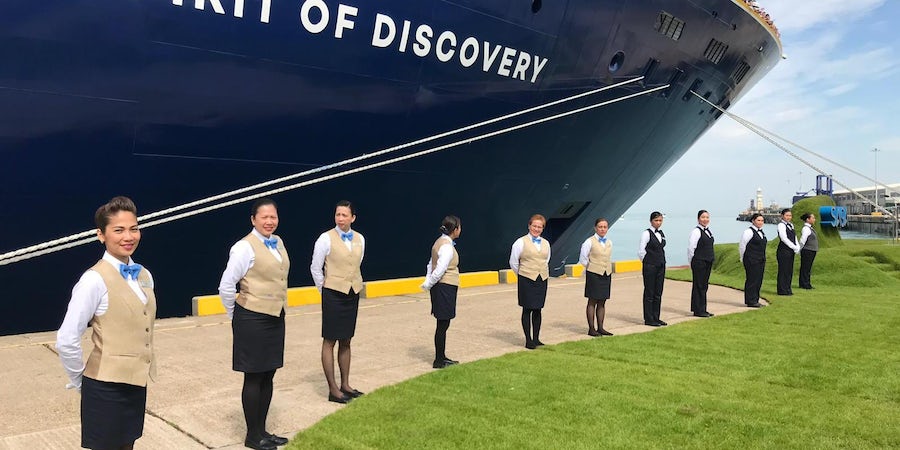 Since announcing its first new-build, Spirit of Discovery, five years ago, Saga’s mission has been to construct a boutique ship with a very British feel, aimed entirely at British passengers.

Sure enough, the launch on July 5 was as British as you could hope for, with the Duchess of Cornwall performing the honours and guests at the naming treated to an English garden party on the quayside at Dover.

Spirit of Discovery is now on its maiden voyage, fittingly, around the British Isles, and we’re onboard to see how the ship is shaping up.

The crew, around 30 percent of whom are new to the over-50s line, are under considerable scrutiny as of the 858 passengers on the maiden voyage, 582 have sailed with Saga before. These repeaters have a real sense of ownership of Saga; we’re hearing a lot of good-natured one-upmanship about who’s been on the most cruises, who’s being remembered by which crew members. We’re also hearing a fair bit of moaning about the slow service in some of the restaurants. Teething troubles on a maiden voyage are nothing new, though, especially with a new class of ship. And there’s certainly a lot to love about Spirit of Discovery.

Here is a roundup of our first impressions of Spirit of Discovery.

Is it really ‘boutique’?

Whether a ship carrying 999 passengers can be described as ‘boutique’ is debatable. A fair few passengers have commented that they keep getting lost. But as one regular said, the ship already felt smaller after 24 hours onboard. And everything is relative; Spirit of Discovery is only mid-sized in cruising terms, at 58,250 tonnes. The ship looks big from the outside; it’s tall, as there are so many balconies (one for every cabin) but inside, it’s elegant and cosy at the same time. There are comfortable niches everywhere for sitting with a coffee and a book. None of the spaces feel cavernous. There’s a real sense of clever planning. For example, instead of stepping onboard in to a lobby and reception area, you walk up the gangway into the gorgeous Living Room, with a coffee bar, sofas and chairs and a sweeping staircase against the backdrop of a bronze-effect artwork, 26 feet high.

Cabins are a winner on this ship. Every single one has a balcony, including 109 single cabins, and they really feel like smart hotel rooms. Standard cabins are a roomy 215 sq ft, with wide balconies, two armchairs, marble-topped vanity, fridge, walk-in dressing room and the all-important tea and coffee making facilities. There are useful features – USB ports on both sides of the bed, multiple plug sockets (British and European), spacious bedside tables and even a holder on the wall where you can stash all the daily programmes instead of scattering them around.

More dining choice than ever before

Spirit of Discovery has three speciality restaurants as well as two main dining areas and there’s no charge to eat in any of them. So far, we’ve eaten in Coast to Coast, the light and bright seafood restaurant, where we had seared tuna with a sesame crust, an excellent sole meuniere and a selection from what we still reckon is the best cheese trolley at sea. There’s also an Asian fusion restaurant, East to West, where we put away dim sum and a delicious prawn curry, and The Club by Jools, a steakhouse with live jazz in association with Jools Holland.

The Grand Dining Room was under pressure on the first formal night because everybody turned up at once, so we were sent to The Grill, the buffet restaurant on Deck 12, which has the same menu at night. I was pleasantly surprised at how classy this restaurant felt in the evening, transformed with linen tablecloths and Villeroy & Boch china.

The Britannia Lounge, the main entertainment space, is absolutely lovely, with a dramatic glass ceiling and masses of space for everybody, sitting areas divided up by shelves of ornaments and objets d’art. We love The Club by Jools, too; it’s got the feeling of an intimate jazz club, with a tiny bar where we perch to listen to a duo who play jazz classics every night. The Library is extraordinary; it’s enormous, but divided up into comfortable seating areas, with a coffee station. It’s a popular gathering place; people come here to do jigsaws and crosswords, browse the books and gossip over coffee. All of these spaces are enhanced by an attractive art collection, all contemporary pieces commissioned from artists living and working in the U.K.

Not everywhere is working, though. We're yet to fall in love with the South Cape Bar, which had a great deal of promise but has slow service and, with no live music, a rather cold atmosphere.

Saga is boosting up its shore excursion offering with a kind of free concierge service, Explore Ashore, that offers detailed port information, suggestions and bookings for private tours (which you pay for, of course) and beefed-up excursions alongside more regular fare. We did a tour of Northumberland’s Alnwick Gardens and Castle (setting for two Harry Potter films and an episode of Downton Abbey). An already excellent day was made spectacular by an informal, half-hour talk with the Duchess of Northumberland, who has devoted her life to developing the stunning gardens since 1997. Our guide told us that in her whole career, she’d only known of three groups that had had an audience with the Duchess, so we felt very privileged. Saga plans more of these special, more personal tours.

Saga’s cruises are priced at the high end but you get a lot for your money. There’s absolutely no sense of nickel-and-diming on this ship. Your cruise starts with a taxi to the port. Gratuities are included and there’s no service charge on drinks, which are pleasingly cheap – just £2.90 for a gin and tonic. There’s no charge for for speciality dining and shuttle buses in port are free. Wine is poured with dinner every night, generously; decent reds and whites, although the Californian Zinfandel rose is sickly sweet and not worthy of a British ship. The spa has a gorgeous thermal suite, free to use, with a big hydrotherapy pool, two saunas, a steam room and curvy, heated loungers. All classes in the gym are included. Internet is free, although rather slow.

I do wonder whether Saga will have to change some systems to make its bigger ship work. For example, the only way to book Coast to Coast, East to West and The Club by Jools is to stand in line and make your reservation with the maitre d’. This seems a most inconvenient and antiquated concept and we spent the first 45 minutes onboard, when we’d rather have been tucking into scones and clotted cream, queueing to make reservations. Now the cruise is underway, you also have a half hour window from 6 p.m. to 6.30 p.m. to book by phone -- or you can run around Deck 6 to see which restaurant has space. A central booking desk, a reservations hotline or the ability to book online would make a big difference.