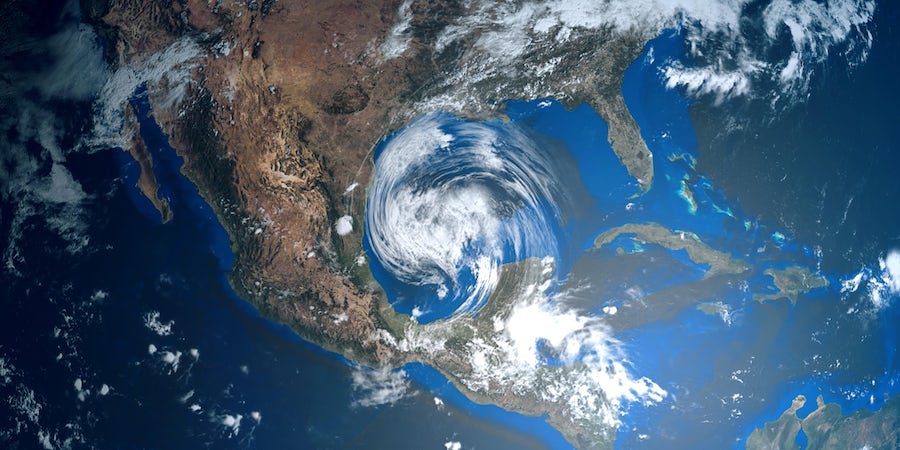 Hurricane in the Gulf of Mexico (Photo: Sasa Kadrijevic/Shutterstock)

Hurricane in the Gulf of Mexico (Photo: Sasa Kadrijevic/Shutterstock)

(12:45 p.m. EDT) -- After briefly reaching category 1 hurricane status as it made landfall, Barry has been downgraded to a tropical storm and continues to move inland. Currently located about 50 miles south-southwest of Shreveport, Louisiana, the storm is moving north-northwest at 9 miles per hour, bringing heavy rain and maximum sustained winds of 40 mph. Cruises in the area have been affected, but the ports of New Orleans and Mobile have reopened.Carnival Fantasy's next voyage, which was scheduled to depart July 13 from Mobile, has been shortened by one day. The ship will now sail a four-night cruise departing July 14; it will call on Cozumel on Tuesday and return to Mobile as scheduled. Carnival has asked passengers to arrive at the cruise port one hour later than their originally scheduled times; all passengers must be onboard by 4 p.m. All booked passengers will receive prorated refunds for the missed day. Cruisers who pre-purchased beverage packages will see one day's costs returned to the original form of payment. Costa Maya port fees and pre-purchased ship-sponsored shore excursions will also be refunded. Those choosing not to sail will receive a future cruise credit and a refund of prepaid purchases."We realize this is an unexpected change and sincerely apologize for this disruption to your vacation," the cruise line said in a statement.Carnival Glory's July 14 cruise will sail from New Orleans as planned, and Carnival Valor, which saw its previous sailing altered Thursday to end in Mobile instead of its New Orleans homeport, will return to New Orleans July 15 for its next scheduled voyage. American Cruise Lines has also altered the departure port for its July 14 sailing. Originally scheduled to sail roundtrip from New Orleans, the voyage will instead depart from Natchez, Mississippi. The line will provide passengers with transporation to the port. The cruise is currently expected to conclude in New Orleans as planned. American Queen Steamboat Company offers sailings in the area also, but a request for information about potential itinerary changes was not immediately answered.According to the

, a tropical storm warning is still in effect for part of the area.We will continue to update this story as more information becomes available.