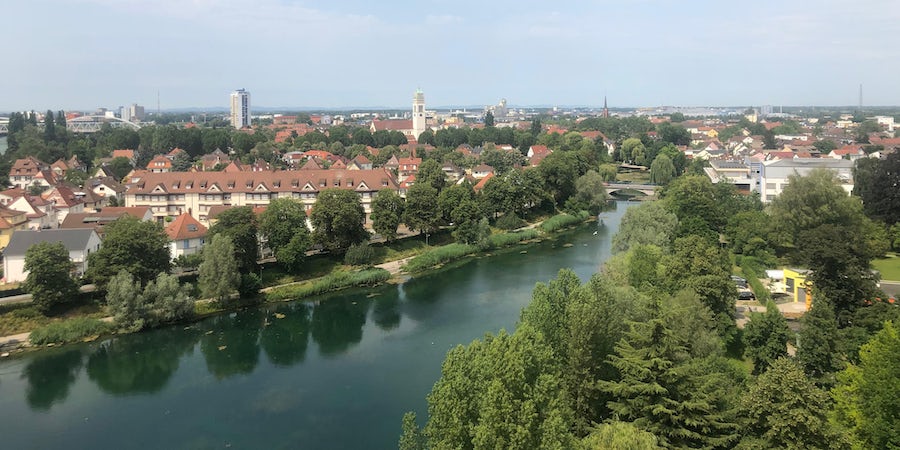 Just Back From: An Active Cruise With Emerald Waterways

Being able to stay active on a river cruise has become an expectation, with more lines adding wellness programs and interesting excursions so people can experience Europe at ground level – as opposed to from the windows of a bus.

Emerald Waterways is one line that’s kept on top of the trend. This year, the company  introduced Activity Managers to design and co-ordinate activities both on and off the ship – usually an active excursion such as biking or hiking – which passengers can take at no extra charge. The Activity Manager also adds an extra element onboard, leading activities such as Pilates, yoga and aqua aerobics.

His (or her) role even extends to night time activities such as trivia, karaoke and organising talent shows.

We got onboard Emerald Waterways Emerald Sky on a Rhine River  cruise to put ourselves -- and the new program -- through its paces. Here are our impressions of how an Activity Manager contributes to the trip:

1. It Allows for Flexibility -- On and Off the Ship.

The day we boarded Emerald Sky just happened to be the hottest day of the year in Breisach, Germany, ever recorded – 39 c (100 degrees Fahrenheit), during the mini-heatwave central Europe experienced in late June.

So the walk to the church at the top of the hill sitting in the middle of town, though a relatively easy hike under normal circumstances, could have been a challenge.

But Niall the Activity Manager, a friendly Brit from Macclesfield, near Manchester, who had previously done duty as assistant Cruise Director on Royal Caribbean ships, adapted the activity to suit the group's ability -- and the weather. He also brought along extra water and took us back down a shorter route to the ship.

Niall also took charge during the next day’s active excursion, when around six of us took a bike ride around Kehl and a city park. It was flat all the way, with dedicated bike lanes, but the highlight was a clamber to the top of a lookout structure with stunning views across to the Black Forest. While this segment wasn't part of the excursion, our group asked if we could do it and Niall factored it in (imagine trying to go off and do your own thing with a group of 40?).

Meanwhile, back on the ship, Niall made a point of tailoring the activities such as Pilates and yoga, to the group who attended (whether they were beginners or more experienced; the type of exercise they wished to do etc.)

Having a dedicated AM means you have a point of contact should you have any questions about the active excursion -- which we all did!

"Active" means different things to different people, and with wide differences in ages and abilities, it was helpful and reassuring to be able to check with Niall to gauge how active the excursion would be.

Niall erred on the side of caution, and nothing was overly challenging throughout the cruise. For anyone slightly unsure, it was great to have him there.

Similarly, having him on the excursion with you meant you could advise him if you wanted to peel off, if you were getting tired out -- or wanted the low down on what he's got planned the next day.

The role is distinct from a guide, who will give you the history and the background on the place you are visiting, but the Activity Manager is the one who will lead the tour.

On Day 3 we opted for a hike in Heidelberg, through the forest to the ruined castle and grounds and on into town. There were about 15 of us in total -- out of a ship total of 160 or so, the majority of which were going on a standard tour to the town and castle.

So as we boarded our own mini-coach with our own dedicated guide and dedicated AM. As we headed towards the castle, we were told that by opting to do the Active Excursion we would not only avoid the crowds, but the ascent would be via the old, original funicular (which we had to ourselves). For this excursion we were accompanied by an extremely knowledgeable (and entertaining) guide, Tomas, who brought this history of this fascinating town alive, in particular the castle and the rambunctious fraternities that were formed here when it became a university town.

It was a lovely and peaceful walk down through the trees, catching glimpses of the city. In this day and age of tourism overcrowding, this was reason enough to opt for the alternative. When we got to the castle it was as they said -- much less crowded as everyone else had visited in the morning.

4. We'd Love to See it Even More Active

Kehl is a stop for Strasbourg, which lies just 15 minutes away by bike over the Passerelle des Deux Rives, a beautiful pedestrian and tram bridge. The bridge is the border between the two countries and is seen as a symbol of a united Europe; on the 60th anniversary of NATO, the heads of state for member nations met in the middle for a symbolic handshake.

So we were a bit confused why this wasn't the active excursion (rather than the ride through Kehl, which is -- how to put this delicately? -- not Strasbourg). When we got back to the ship, we decided to press on to Strasbourg where we spent a delightful afternoon wandering around the old town.

Same story with the bike ride in Koblenz the following day -- the excursion felt too short and there was so much more we could have done.

So the main takeaway from our group is that Active Excursion activities could be a lot more challenging. It's early days -- the program with the Activity Managers only launched two weeks ago -- so we acknowledge that it’s subject to change.

And from what we understand, this is exactly what will happen -- Niall (and the other AMs) will gauge the cruise demographic and adjust the programme accordingly. Niall is also scoping out new routes and itineraries, and as he gets to know the terrain, it may be that what is on offer in September is very different from what we did in July.

5. It Has to be Different From Other Lines

Most river lines now offer an active option, mainly cycling or hiking, and we feel for this to stand out Emerald should dare to be different and offer some more “out there” stuff -- such as stand-up paddleboarding, climbing? However, the line does offer canoeing on the Danube and Douro and plans to launch it on the Rhine and Rhone soon.

Overall, this is a great idea, and we love the fact Emerald Waterways has added an Activity Manager -- at no additional cost for passengers. We can't wait to see how this programme and the role of the Activity Manager evolves over the course of the season and beyond.